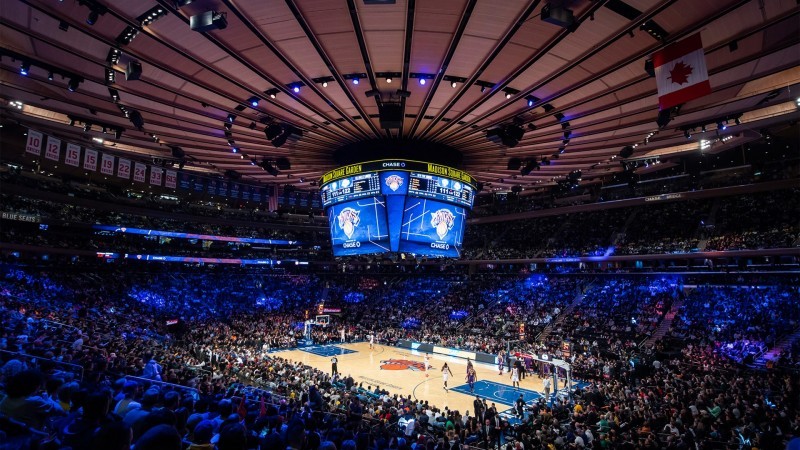 Madison Square Garden bills itself as the “World’s Most Famous Arena.”

Located at 4 Pennsylvania Plaza, on Seventh Avenue between 31st and 33rd Streets in Manhattan, it is the fourth venue to bear the name “Madison Square Garden.” The building that became the first Madison Square Garden at 26th Street and Madison Avenue was constructed in 1832 as the passenger depot of the New York & Harlem Railroad. In 1873, it was leased to P.T. Barnum, who converted it into the open-air “Hippodrome” for circus performances. Two years later, the space was filled with trees, flowers and fountains and named “Gilmore’s Concert Garden,” playing host to music events, boxing exhibitions, revival meetings and the inaugural Westminster Kennel Club Dog Show. The building was useless during inclement weather and was demolished after 11 years. MSG II was built on the same location at a cost of $ 3 million by a syndicate which included J.P. Morgan, Andrew Carnegie, Barnum and W.W. Astor. It included a 32 story tower—New York’s second tallest building at the time—along with a 1,200 seat theatre, 1,500 seat concert hall, a main hall that could accommodate over 10,000 patrons and the largest restaurant in the city. The building was unsuccessful and the New York Life Insurance Company, which held the mortgage on in, tore it down in 1925 to make way for what is now the landmark New York Life Building. A third Madison Square Garden opened on 8th Avenue between 49th and 50th Streets in 1925. It was built in 249 days by boxing promotor Tex Rickard at a cost of $ 4.75 million, was 200 feet by 375 feet and had seating on three levels with a maximum capacity of 18,500. MSG III played host to basketball [college and pro], hockey, concerts, and boxing matches before being razed between 1968 and 1969. The site is now where One Worldwide Plaza is located.

Irving R. Felts tore down the above-ground portions of the original Pennsylvania Station and began construction of the current Madison Square Garden on October 29, 1964,—eight months after The Beatles performed for the first time in America at the Ed Sullivan Theatre, just 20 blocks north. The destruction of Penn Station, a revered piece of New York architecture, led to the city’s landmarks preservation movement which later helped save Grand Central Terminal from being demolished. On February 11, 1968, the current Madison Square Garden opened within the office and entertainment complex known as Penn Plaza. MSG IV cost $ 123 million [$307 million in 2015 dollars] to build and was home to the New York Knicks [Daily Dose, July 28], New York Rangers, concerts, boxing, circuses and ice shows upon its opening. In 1984, the four streets surrounding the Garden were designated as Joe Louis Plaza, in honor of the former heavyweight champion who made eight successful title defenses in MSG III. Seven years later, Garden owners spent $200 million to renovate facilities and add 89 suites. Madison Square Garden went through a $ 1 billion second renovation between 2011 and 2013, making it the fifth-most expensive arena ever built.

Madison Square Garden is the oldest and most active major sporting facility in the New York metro area. It is the oldest arena in the NHL, second-oldest venue in the NBA, fourth-busiest music arena in the world and hosts 320 events a year. MSG is a midtown Manhattan landmark, close to the Empire State Building, Koreatown and Macy’s at Herald Square. At the suggestion of former Rangers’ captain Mark Messier [Daily Dose, July 3] ] the locker rooms were built to be round in order to foster team unity. MSG features the only arena ceiling in the world that is concave, rather than convex and features sound absorptive acoustic insulation. The Garden has played host to four Stanley Cup Finals, WWF wrestling, tennis, Republican and Democratic National Conventions and religious rallies. The “Mecca of Basketball” has hosted NCAA, NIT and Big East tournaments, five NBA Finals, and five All-Star Games—two NBA and three WNBA. The “Fight of the Century,” the first Ali-Frazier bout, took place at MSG in 1971 and the venerable arena has hosted the NFL Draft as well as the Grammy and Country Music Association Awards. Elvis Presley and John Lennon performed their final concerts at the Garden. Elton John has done 64 shows, U2 has performed 17 times, Madonna has taken the stage 31 times and, in 2006, Billy Joel set an MSG record with a run of 12 consecutive sold out shows.

On this date in 1925, Madison Square Garden held its first hockey game when the expansion New York Americans hosted the Montreal Canadiens before 19,000 fans. The visitors won, 3-1, and the following year, MSG, under Tex Pickard, became owners of the newly formed New York Rangers. The Americans folded in 1942.