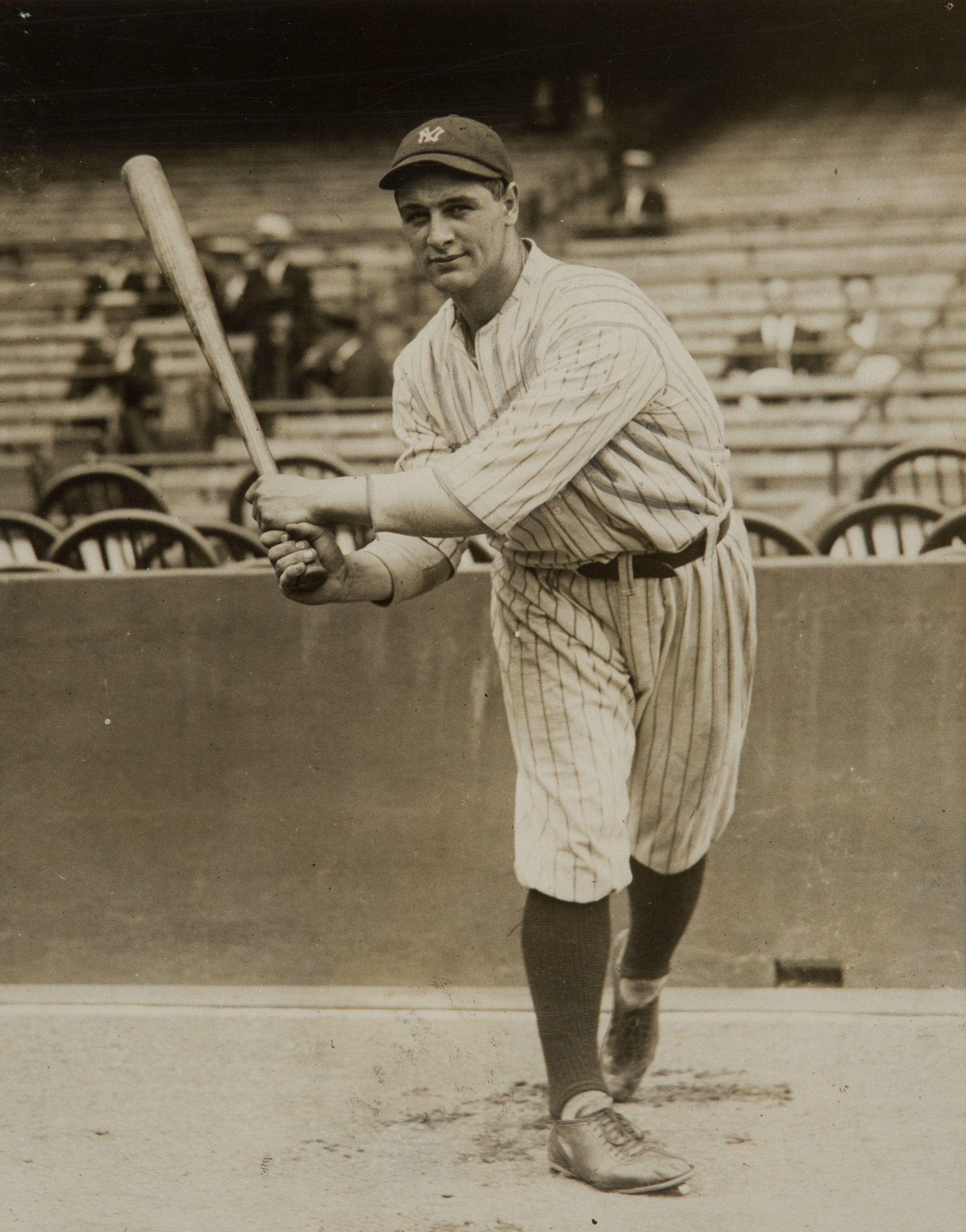 Lou Gehrig is the greatest first baseman in baseball history.

Talented and humble, Gehrig was an authentic American hero.  His tragic early death made him a legend.  One of the greatest run producers ever to pick up a bat, Gehrig delivered nearly 2,000 RBI in 8,000 major league plate appearances.  He drove in more than 150 runs in each of seven seasons, more than any player in history.  Gehrig averaged 147 RBI a season while batting behind Babe Ruth and, later, Joe DiMaggio – two of the greatest base-clearers of all time.  A two-time league MVP, Gehrig scored over 100 runs and drove in over 100 runs in a record 13 straight seasons.  He won the Triple Crown in 1934 after batting .363 with 49 homers and 149 RBI.  A prodigious power hitter, Gehrig hit 493 career home runs and made them count.  He clouted 73 career three-run homers and 166 two-run shots for the highest average of RBI-per-homer in history [2.47]

A Gibraltar in cleats, Gehrig played 17 big league seasons, all in New York Yankee pinstripes.  He won seven pennants and six World Series championships.  In 34 World Series games, Gehrig batted .361 with ten home runs and 35 RBI.  He led the American League in RBI five times, in runs four times, and boasted the top on-base percentage during five seasons.  The three-time AL home run king collected over 200 hits eight times.  Gehrig is one of only seven players with more than 100 extra-base hits in a season, and he did it twice.  Playing in the shadow of Ruth in the first part of his career and DiMaggio in the latter years, Gehrig was Yankee captain from 1935 to 1941.  He is the first player to have his uniform number retired [Gehrig wore Number 4 because he hit behind Ruth, who batted third and wore Number 3] and was the top vote-getter on MLB’s All-Century Team in 1999.

Nicknamed the “Iron Horse,” Gehrig played in 2,130 consecutive games that spanned nearly 14 seasons.  It was one of baseball’s most hallowed marks before being broken by the Baltimore Orioles’ Cal Ripken Jr., in 1995.  At six feet tall and weighing 200 pounds, Gehrig embodied toughness and reliability.  He played despite a broken thumb, broken toe and back spasms.  Later in his career, doctors discovered evidence of 17 different fractures that had “healed” while Lou Gehrig continued to play.  He hit 23 career grand slams, a record that stood for 75 years until Alex Rodriguez broke it in 2013.  The Iron Horse, however, hit his without the benefit of performance-enhancing drugs.

Born in New York City June 19, 1903, Henry Louis Gehrig was the son of first-generation German immigrants.  The only one of Christina and Heinrich Gehrig’s four children to survive, Gehrig’s mother was highly protective of her son and was the family’s primary breadwinner, as her husband Heinrich had trouble finding work and was in poor health.  The family lived in the Yorkville section of Manhattan before moving to Washington Heights when Gehrig was five.  In 1917, he entered Commerce High School, where he was a standout in football and baseball.  After winning the 1920 New York City high school baseball championship, Commerce was invited to play Windy City champion Lane Tech in a game at Wrigley Field in Chicago.  With the bases loaded in the top of the ninth inning, Gehrig hit a grand slam completely out of the ballpark.  The Chicago Tribune wrote the next day, “Gehrig’s blow would have made any big leaguer proud, yet it was walloped by a boy who hasn’t yet started to shave.”

Gehrig accepted a football scholarship to Columbia University in 1921.  A fullback, he also pitched and played first base for Columbia’s baseball team.  Gehrig set school records for batting average, home runs and slugging percentage and was the team’s best pitcher.  In April 1923, he struck out 17 batters to set a Columbia record that still stands.  New York Giants manager John McGraw coveted Gehrig and advised the youngster to gain some seasoning with the Giants’ Eastern League-affiliate in Hartford.  After playing a dozen games under an assumed name, the Ivy League banned Gehrig for a year for having played professionally.  In 1923, he left Columbia and signed with the rival Yankees for $ 400 a month plus a $ 1,500 bonus, a veritable fortune for the dirt-poor Gehrigs.  He spent most of his first two seasons in the Eastern League before landing a spot on the big league club during spring training in 1925.

Wally Pipp was in the prime of his career in the summer of 1925.  The 32-year-old first baseman was coming off one of his best seasons, having hit .295 with 19 triples and 114 RBI.  On June 2, Pipp – who had manned first base for the Yanks for a decade – was given the day off.  He was replaced by Gehrig who, batting sixth, went 3-for-5 with a double.  Pipp never got his job back, as the Iron Horse did not come out of the lineup for the next 13-plus seasons.  Gehrig played in 2,130 consecutive games with the Yankees, a record that stood for over five-and-a-half decades until Ripken surpassed it.

Mr. Gehrig’s statistics are mind-boggling.  He led the league with 20 triples in 1926, the first of a dozen straight years he would hit better than .300.  Gehrig compiled a lifetime batting average of .340 – and stole home 15 times in his career!  Tomorrow marks the 85th anniversary of Gehrig’s four-homer game.  On June 3, 1932, he became the first American Leaguer to hit four consecutive home runs in one game — and he nearly had five.  In Gehrig’s fifth and final at-bat of a game in Philadelphia’s Shibe Park, he belted a drive to the deepest part of the ballpark — 460 feet from home plate – where it was caught by A’s hall-of-fame centerfielder Al Simmons.  What’s more, Gehrig became the first man in baseball history to ever hit three home runs in one game for the fourth time, which he did when his fifth-inning homer cleared the fence in left-center field.

Gehrig struggled during spring training in 1939.  He did not hit a home run and his coordination and speed had deteriorated significantly.  After the first month of the season, Gehrig’s statistics were the worst of his career.  Speculation abounded in the press.  New York reporter James Kahn, who knew Gehrig well, wrote, “I think there is something wrong with him.  Physically wrong, I mean.  I don’t know what it is, but I am satisfied that it goes far beyond his ball-playing.”  After struggling to make a routine play at first base and going hitless against the Washington Senators  April 30, he took himself out of the lineup for the following game.  In Detroit on May 2, 1939, the Briggs Stadium announcer told the fans, “Ladies and gentlemen, this is the first time Lou Gehrig’s name will not appear on the Yankee lineup in 2,130 consecutive games.”  The appreciativeTigers fans gave Gehrig a standing ovation while he sat on the bench with tears in his eyes.  On his 36th birthday six weeks later, after undergoing extensive testing at Mayo Clinic, Gehrig was diagnosed with amyotrophic lateral sclerosis [ALS].

The Iron Horse immediately retired, and the Yankees held “Lou Gehrig Appreciation Day” July 4, 1939.  Before more than 62,000 fans on a sweltering afternoon in New York, Gehrig famously called himself “the luckiest man of the face of the earth.”  There was not a dry eye in the house, and it remains one of the most poignant and emotional moments in the history of American sports.  Five months later, the Baseball Writers Association of America voted unanimously to suspend the five-year waiting period and place Lou Gehrig in the Hall of Fame immediately.

On this date in 1941, 16 years to the day that he replaced Wally Pipp at first base, Henry Louis Gehrig died at his home in the Bronx.