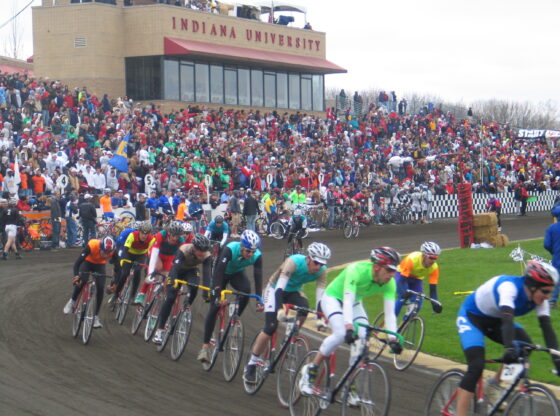 The Little 500 is a bicycle race held annually during the third weekend in April at Indiana University in Bloomington. The race is held in Bill Armstrong Stadium, which has a seating capacity of 6,500 and is also home to the IU soccer team. A flat, quarter mile oval cinder track surrounds the field and plays host to the competition. “Little 5” was founded in 1951 by Howdy Wilcox, the first Executive Director of the IU Student Foundation and modeled after the Indianapolis 500, which his father won in 1919. 33 four-man teams compete in a relay-style race of 200 laps [50 miles]. They begin in 11 rows of three riders abreast and must complete at least 10 exchanges between riders during the course of the race, which usually takes two hours to complete. The field is determined based on Qualifications, which is a one-day event held about one month prior to the race. “Quals” is a four lap race in which each rider on the team completes one lap and exchanges his bicycle in a 10 yard “exchange zone”. Each team is given three attempts to qualify and posts their fastest time. The 33 teams with the fastest cumulative times make the field and race day positions are based on those times. The team with the fastest qualifying time gets the pole position [Row 1, inside lane] and each subsequent time earns the remaining positions. IUSF issues the same bicycles to each team; an official AMF Roadmaster single speed model with coaster brakes and flat pedals. No additional gear may be added to the standard-issue bikes, which eliminates technology as a factor in winning the race. To be eligible, each rider must be full time undergraduate student, an amateur cyclist, drug free and have a cumulative GPA of 2.0 or better. Riders may only compete in the race four times over a five year span. The Little 500 is the centerpiece of what is billed as “The World’s Greatest College Weekend” that also includes a Women’s Little 500 [100 laps, 25 miles, held the day before the men’s race] and several other campus events. Then-senator Barrack Obama attended the Women’s Race in 2008 and Lance Armstrong called the men’s race “the coolest event I have ever attended”. The 1979 Oscar winning film, Breaking Away, was based on the race and filmed entirely in Bloomington.

25,000 fans descended upon Bloomington for the Little 500 this past April 25. The race was won by Sigma Phi Epsilon fraternity. It was their third-ever win in this storied event.