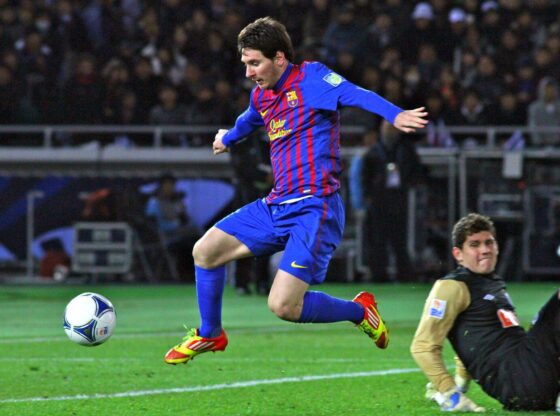 Soccer is the most popular sport in the world and Lionel Andres Messi Cuccittini may be the sport’s greatest player. Born in Rosario, Sante Fe, Argentina on this date in 1987, Messi was diagnosed with growth hormone deficiency at age 11. The local team showed interest in his play but were not willing to pay for treatment, which cost $ 900 per month, and FC Barcelona was, so he set off for Spain and enrolled in the club’s youth academy, La Masia. Messi played in FC Barcelona’s junior program from 2000-2004. He made his league debut in 2004 at the age of 17 and was at that time the youngest club player ever to play in La Liga, the top division of the Spanish futbol league system. In June of 2005 he led Argentina to the U-20 World Youth Championship and in September obtained Spanish citizenship and was finally able to compete in the Champion’s League that very month, scoring one goal in six appearances before an injury ended his season. He emerged as a star in the 2006-07 season and drew comparisons to Diego Maradona, the greatest Argentinian player of all time. He scored 14 times in 26 matches before suffering an injury but came back later in the season to become the youngest player ever to score a hat trick in El Clasico. 11 of his last 14 league goals came during the final 13 games. in 2007-08 he was nominated for FIFPro World XI Player Award as a forward and in helped Argentina win a gold medal in the 2008 Olympic games. He finished second in the 2008 FIFA World Player of the Year award and placed second, behind Cristiano Ronaldo, in the Ballon d’Or.

The 5’7” scorer was moved from right winger to “false-9” in the centre of the front line in 2009 for Barcelona and beat Ronaldo for Ballon d’Or by the largest margin ever. He was also named FIFA World Player of the Year. He won FIFA Ballon d’Or in 2010 and then again in 2011 and 2012. He also won the UEFA Best Player in Europe Award in 2010-11. At the age of 24, he became Barcelona’s all time top scorer in all official club competitions and in November 2014 Messi became the all time top scorer in La Liga and the all time leading goalscorer in UEFA Champions League. Messi is the only player to top-score in four consecutive Champion’s League seasons. He owns the record for most hat tricks and most goals scored in a season. He scored 5 goals in one match in 2012 and that year won an ESPY as Best International Athlete. Lionel Messi owns 9 world futbol records, 8 European League records, 5 Argentinian, 22 Spanish League and 8 FC Barcelona marks. He is the first footballer to win 3 European Golden Shoe Awards and 4 FIFA Ballon d’Or awards. At the 2014 World Cup, he led Argentina to a second place finish and won the Golden Ball award as the best player of the tournament. Lionel Messi turns 28 years old today.

“I have seen the player who will inherit my place in Argentinian futbol and his name is Messi”– Diego Maradona, February, 2006