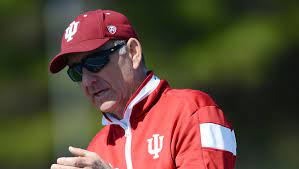 In 40 seasons at Indiana [44 overall], Loring created a legacy that may never be matched in the sport again.  He is the only coach in Division I women’s tennis history to amass 800 wins [Paul Scarpa is the winningest coach in collegiate tennis history, having led the Furman Paladins men’s program to 853 victories in 45 seasons].  In four decades in Bloomington, Loring’s teams won 16 Big Ten championships.  His 846 career wins are the most in women’s collegiate history, and his 804 victories at Indiana are the most-ever by a Big Ten coach.  Loring led the Lady Hoosiers to 29 national tournament appearances, including the 1982 national title.  IU won a record 39 matches that year en route to the university’s only championship in women’s athletics.

A standout at the University of California – Santa Barbara, Loring took the head coaching job at UCSB following his graduation in 1972.  He built the Gauchos into a national contender, going 42-17 in four years at the helm.  In 1977, he accepted the head coaching position at Indiana.  When he arrived in Bloomington, Loring found himself surrounded by what he called “a wonderful treasure chest of knowledge to walk into.”  IU boasted a handful of legendary coaches at the time, including Bob Knight, Doc Counsilman, Hobey Billingsley, Sam Bell and Jerry Yeagley.  Knight won three national championships and retired as the winningest coach in college basketball history.  Councilman won six NCAA titles, led the Hoosiers to 20 consecutive Big Ten swimming crowns and coached two Olympic teams.  Billingsley’s divers won more than 100 national titles, while Bell coached the Hoosiers to 22 Big Ten track crowns and mentored 11 Olympians.  Jerry Yeagley is the winningest coach in collegiate soccer history and guided IU to six NCAA championships.

Loring strived to create a family atmosphere, and attributes his success to his recruiting style.  From day one, he always made it clear to his recruits that their top priority was academics.  That meant that players knew they could asked to be excused from practice if they had a big test the next day.  They knew they were at IU to get an education.  “It was my goal to teach them how to have their priorities in line,” Loring said shortly after announcing his retirement in January 2017.  “You’re their family for four years.  Because their families entrusted them to me for four years, I always took that responsibility seriously.  I wanted to make sure there was a good outcome.”

Loring was monumentally successful.  In 40 years, he graduated 100 percent of athletes who exhausted their eligibility under his guidance in Bloomington.  One hundred percent!  Loring’s squads earned 12 Herbert Cups, presented annually to the IU athletics program with the highest grade-point average.  Upon Loring’s retirement following the 2016-17 season, IU Athletics Director Fred Glass said, “Lin Loring has enjoyed one of the most exemplary careers in the storied history of IU Athletics.  The impact and influence he has had on the lives  of his students over the course of four decades at IU is truly extraordinary.”

“A year from now no one will remember how many wins I had,” said Loring upon announcing he was stepping down.  “The fact that my students graduated and went on to be good citizens and good alumni of the university is what I am most proud of.”

From 1987 to 1995, Indiana won nine consecutive Big Ten championships.  Loring’s teams were 650-102 in dual matches, a winning percentage of 77.4.  Under Loring, the Lady Hoosiers won 350 Big Ten dual matches, the most in the history of the conference.  Loring’s teams posted a dozen undefeated seasons.  In 1992, no Indiana player lost a single match in Big Ten play, going 69-0.  Between 1978 and 1985, IU reeled off 104 straight victories over conference opponents, a record unmatched in the annals of Big Ten women’s tennis.

A five-time Big Ten Coach of the Year and two-time National Coach of the Year, Loring has mentored 25 All-Americans, 82 All-Big Ten selections, and seven Big Ten Athlete-of-the-Year honorees.  Four of Coach Loring’s players have been inducted into the IU Athletics Hall of Fame, including 1982 national singles champion Heather Crowe, the first women ever enshrined in the Hoosier hall.

Why did he stay in one place so long?  “My dad was career Navy.  We moved every two-and-a-half years.  We got to Bloomington and I was kind of tired of moving, so I put down roots and we stayed.”  Lin, wife Vicki and daughters Taylor and Magdelena love the Heartland and plan to remain in Bloomington.  Lin Loring was succeeded by long-time associate head coach Ramiro Azcui, who has been involved with the Lady Hoosiers since 1992.

Coach Loring founded the Intercollegiate Tennis Association [ITA] Summer Circuit, which allows collegiate athletes to compete in regional tournaments during the summer, elevating their games – and college tennis across the country – during the off season.  In 2000, Mr. Loring was honored with the Rolex/ITA Meritorious Service Award for his contributions to college tennis.

Quarterbacks of Western PA | Who is the best quarterback in the NFL?
Duel in the Sun