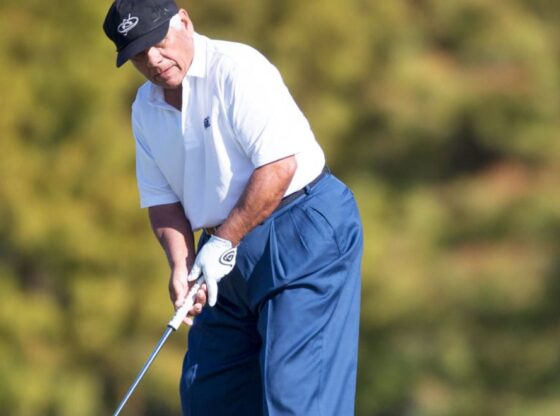 Lee Buck Trevino is the only golfer to win three national titles in the same year.

Born out of wedlock in Dallas, Texas, on this date in 1939, Trevino was raised by his mother– who was a house cleaner–and grandfather, who was a grave digger at Hillcrest Cemetery. The family was of Mexican ancestry and lived in a run-down shack with no electricity or plumbing on the outskirts of Dallas. Trevino began working as a laborer at five, picking cotton and onions in the dusty fields surrounding their home. Glen Lakes Golf Club was a stone’s throw from the Trevino family’s front door and young Lee began caddying for the local players at the age of eight. His uncle gave him an old club and a few golf balls and Trevino began practicing on three short holes reserved for caddies behind their shack at the course. After work, he would hit a least 300 balls while honing his self-taught swing. Trevino dropped out of school in eighth grade to go to work and help support his family, landing a job at Hardy Greenwood’s driving range in north Dallas. At 17, Trevino lied about his age and enlisted in the United States Marine Corps, where he served as a machine gunner in the Far East. Two years later, he re-enlisted and was assigned to Special Services, where he played for the Third Marine Division golf squad and taught rifle range classes on Okinawa. In 1960, Trevino left the Marines, returned to Dallas and began working toward earning his PGA Tour card. He was hired as an assistant pro at Horizon Hills Country Club in El Paso, Texas, and, in 1966, qualified for the U.S. Open, where he made the cut and finished tied for 54th. The following year, he qualified again–finishing eight shots behind champion Jack Nicklaus—to earn 5th place and a spot on Tour for the rest of the 1967 season.

Lee Trevino made 11 cuts in 12 starts in 1967, earning $ 26,473 in prize money while being named Rookie of the Year. The following year, he beat Nicklaus to win the U.S. Open. In 1970, “Merry Mex” won two events, was awarded the Vardon Trophy for lowest scoring average and was the Tour’s leading money winner. The following summer, he beat Nicklaus in a playoff to win his second U.S. Open. Two weeks later, he won the Canadian Open [the first of three] and the following week won the Open Championship at Royal Birkdale, becoming the first player to win those three titles in the same year. Trevino was named Sports Illustrated’s “Sportsman of the Year,” ABC’s Wide World of Sports “Athlete of the Year” and was awarded the Hickok Belt as top professional athlete of 1971. The following season, he won four events while successfully defending his Open Championship title. Trevino was struck by lightning while playing in the 1975 Western Open. When asked by a reporter what he would do if he were out on the course and it began to storm again, Trevino said he would take out his one-iron and point it to the sky, “because on even God can hit the one-iron.” The event caused Trevino back pain throughout the rest of his career but he still managed to win nine more PGA Tour events over the next nine years, including the 1984 PGA Championship at Shoal Creek, his final victory on Tour. Trevino joined the Senior [now Champions] Tour in 1989 and won 29 events, including four major championships.

“Super Mex” won six major championships and 29 events on the PGA Tour between 1968 and 1984. He won the Vardon Trophy five times and played for six U.S. Ryder Cup teams, serving as captain in 1985. Mr. Trevino has 89 wins worldwide and was Rookie of the Year on both the PGA and Senior Tours. He was the first player to shoot all four regulation rounds under par at the U.S. Open [Oak Hill, 1968] and won at least one PGA Tour event for 14 consecutive seasons. Lee Trevino is one of only four players to twice win the U.S. Open, the Open Championship and the PGA Championship. His wide stance, closed club face and flat, unorthodox swing landed him in the World Golf Hall of Fame in 1981.