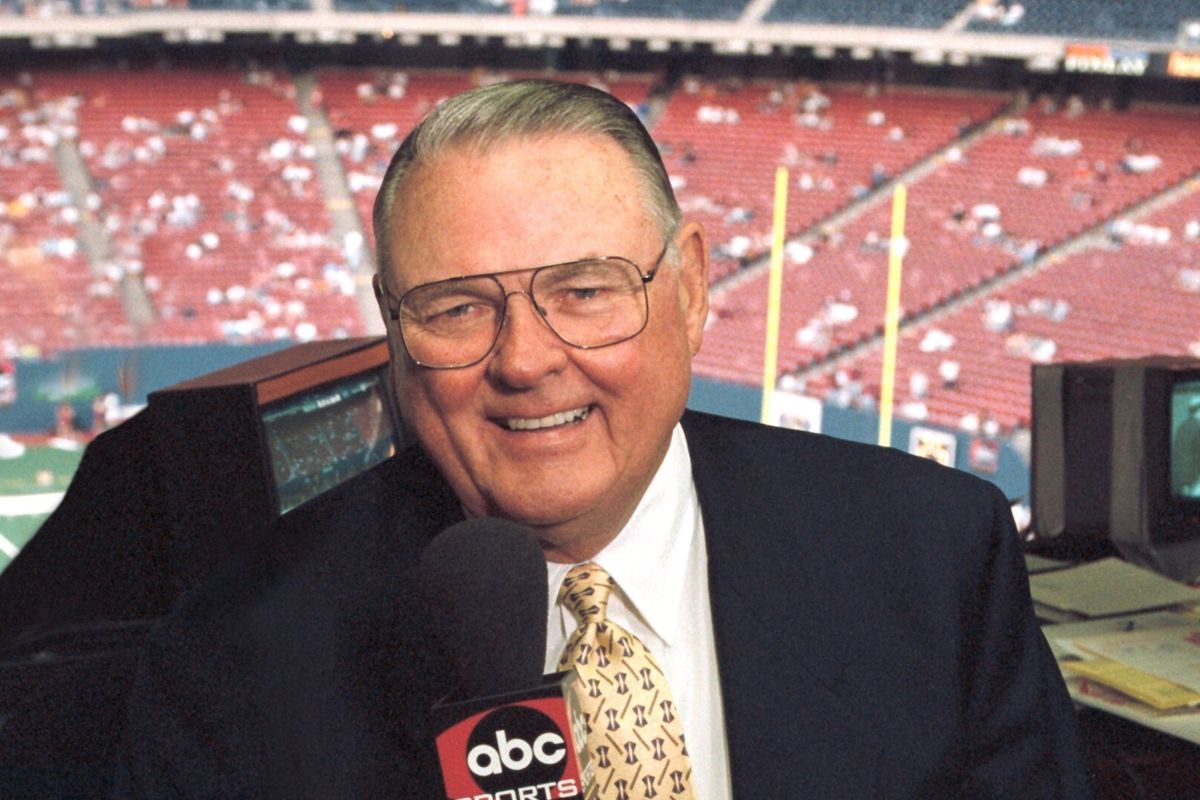 Only a tiny number of broadcasters can truly be said to be the voice of the sport or the event they are most closely associated with.  Vin Scully was the voice of baseball.  Jim McKay was the voice of the Olympics, and Keith Jackson is the enduring voice of college football.  With a distinctive, sonorous voice he described as “always turned up to holler,” Jackson called college football for over half of a century.  His deep cadence and folksy style was perfect for the rah-rah college game.  Nobody but Jackson could open a Saturday night telecast with “There’s a possum-huntin’ moon in the sky” and get away with it.  Beloved in towns like Lincoln and Norman and Tuscaloosa, his unmistakable delivery was energetic and crackling. “Touchdown, Alabama, roll tide!”

Jackson had a down-home, honest style that was completely his own.  “It was my job to amplify, clarify, punctuate and stay the hell out of the way,” he said of his role in the broadcast booth.  His influence was so far-reaching it changed the vernacular of football.  Jackson dubbed Michigan Stadium “The Big House” and named the Rose Bowl the “Granddaddy of Them All.”

He was the first to use “in the hunt” and “dodged a bullet”  — both mainstays in sports today.  Underappreciated lineman were “Big Uglies” who would spend their Saturdays “a-knockin’ heads and rubbin’ the paint off their helmets.”  Pass rushers “pinned their ears back” chasing the quarterback, a rainstorm was a “gully washer” and an imposing player was a “hoss.”

Keith Max Jackson came up out of the red clay of Georgia.  Born in Roopville on this date in 1928, he was the only surviving child of parents who divorced when he was young.  Raised by his grandmother on a small farm 40 miles southwest of Atlanta, Jackson rode a horse four miles to his rural high school each day.  He joined the Marines at 16, spent a couple of years in China, then enrolled at Washington State University under the G.I. Bill.  Jackson switched majors from political science to criminology to speech communications, and called Washington State football games on radio.

After graduating in 1954, Jackson hooked up with KOMO-TV in Seattle, broadcasting the evening news and doubling as a sportscaster.  He then joined ABC as a newsman, working across the desk from Ted Koppel at ABC Radio in Los Angeles.  In 1958, Jackson made history with the first live broadcast of a sporting event [crew] from the Soviet Union.  He covered the American Football League in the early 1960s and was a regular on Wide World of Sports, covering both popular sports and obscure events.

In 1970, he was chosen to be the first play-by-play man for Monday Night Football, where an inebriated Howard Cosell’s cigar once caught Jackson’s pants on fire in the broadcast booth.  Roone Arledge’s first choice for the MNF job was Frank Gifford, who was under contract with CBS.  When his contract expired, Gifford replaced Jackson for MNF telecasts in 1971.  It was a blessing for Jackson and for college football, as he came to define the game for over four decades.

Keith Jackson, who became “Mr. College Football” in 1974, was a great narrator who skillfully articulated the drama of the game to a captivated audience.  Lineman performed “Down in the trenches.” Hard-hitting defenders “laid a few licks on folks,” while high-scoring teams would “burn down the barn and take a couple of rows of the cornfield” with them.  Football fans hung on his every word.  Following a dropped touchdown pass:  “Merciful goodness, six points just went a-wastin.”  Describing  a hard-hitting game: “They’re rockin’ and a-sockin’ and a’whackin’ and a-crackin’”  A loose ball: “Fum-buuuullll!!!” After a penalty flag: “Hold the phonnnnnne!”

Jackson’s voice was the envy of cellos everywhere.  The deep cadence and operatic tone was a spoonful of Georgia sugar, and his down-to-earth manner make him the best college football broadcaster ever to put on a headset.  Jackson was voted National Sportscaster of the Year five years running from 1972 to 1976.  He began calling events for ABC in 1966 and covered MLB, boxing, pro football [AFL, NFL, USFL], auto racing, college and pro basketball, Wide World of Sports, and a total of ten Summer and Winter Olympics.  Jackson, who believes the very best place to take a nap is in the back of a cotton wagon, was never nervous before a telecast.  He kept a slip of paper in his pocket with a few prompts in case he froze during an opening – but never did.

Mr. Jackson considers the 1972 USC Trojans the best team he ever saw, and Bo Schembechler the best after-dinner speaker he ever heard.  Over the course of his 54-year career, he worked with Jackie Robinson, Frank Broyles, Bud Wilkinson, Bill Russell, Dick Vitale, Dan Fouts and Bob Griese.  A member of the American Sportscasters Association and National Sportscasters and Sportswriters halls of fame, Jackson has received the Gold Medal Award from the National Football Foundation and Amos Alonzo Stagg Award from the American Football Coaches Association.  He was the first sports announcer to receive the Stagg award.

In 1999, Keith Jackson was inducted into the Rose Bowl Hall of Fame for his contributions to The Granddaddy of Them All.  In 2015, the Rose Bowl stadium’s radio and television booths were renamed “The Keith Jackson Broadcast Center.”  Jackson retired after calling the 2006 Rose Bowl, the 15th time he had broadcast college football’s longest-running bowl game.

Happy 89th birthday to the best there ever was.

Arcadia News
Not In Football Hall Of Fame
The Halls