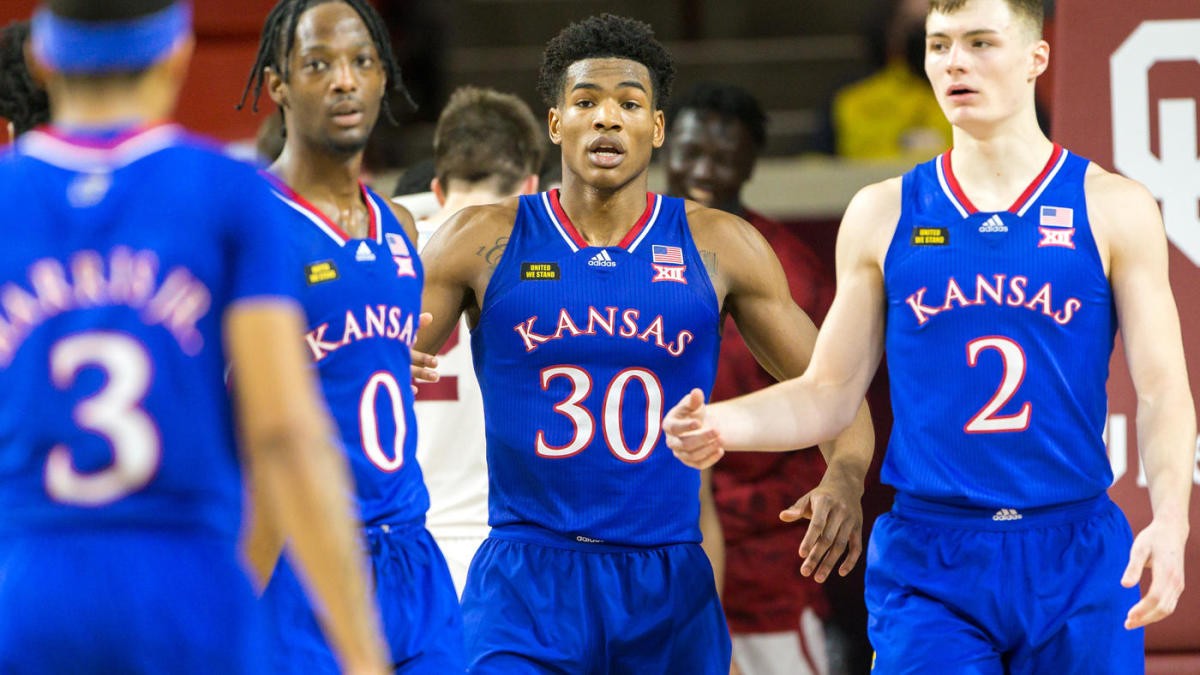 The University of Kansas boasts one of the top programs in the history of college basketball.  One of the true “Blue Bloods” of college hoops, Kansas is one of the most prestigious powers in the land.

The Jayhawks have the most winning seasons [95], most consecutive NCAA tournament appearances [28], and most consensus First Team All-Americans [28], of any program in history.  KU has been playing basketball since 1899.  In 118 seasons, the Jayhawks have won 2,217 games.

Located in Lawrence, 35 miles west of Kansas City and the state’s sixth-largest city, the University of Kansas is situated along the banks of the Kansas and Wakarusa Rivers, in the eastern part of the state.

Founded in 1865, the university offers 345 degree programs to its 22,000 undergraduate students.  A charter member of the Missouri Valley Intercollegiate Athletic Association — predecessor to the Big Eight Conference — Kansas has been a member of the Big 12 since its formation in 1996.

Kansas has had only eight head basketball coaches in 118 years.  All but one – Dr. James Naismith, the inventor of basketball – won more than 100 games.  Naismith was the school’s first basketball coach.

He arrived in Lawrence six years after writing the sport’s first official rules and coached the Jayhawks from 1898 to 1907.  With a career record of 55-60, Dr. Naismith is the only coach in Kansas basketball history with a losing record.  In 1907, Kansas hired one of Naismith’s players, Dr. Forrest C. “Phog” Allen, as head coach.

Known as the “Father of Basketball Coaching” for his innovations to the modern game, Allen helped create the NCAA tournament, successfully lobbied to make basketball an Olympic sport, and formed the National Association of Basketball Coaches [NABC].

Larry Brown guided the Jayhawks to two Final Fours and a national championship.  A notorious vagabond, the 1988 Naismith College Coach of the Year stayed in Lawrence only five seasons, the shortest tenure of any coach in KU history.  Brown was replaced by Roy Williams, who went 418-101 while leading Kansas to four Final Fours.

In 2003, the three time Coach of the Year left for North Carolina, where he has led the Tar Heels to three NCAA championships.  KU’s current coach is Bill Self, who is three wins shy of surpassing Williams as second-winningest coach in school history.

Self was an assistant at Kansas before becoming one of college basketball’s most successful coaches.  Legendary coaches John Calipari and Gregg Popovich also served as assistants at KU early in their careers.

Pay heed, all who enter: beware of the Phog.

The Jayhawks play home games in Allen Fieldhouse, which opened in 1955.  Named after Phog Allen, the 16,300-seat facility is one of the most raucous arenas in America.

In 2010, ESPN The Magazine named Allen Fieldhouse the loudest college basketball venue in the country.  In 2017, Allen broke the Guinness World Record for loudest indoor arena when the noise level reached 130.4 dB in a game against West Virginia.

Kansas’ signature chant is Rock, Chalk, Jayhawk.  Former President Teddy Roosevelt called it the greatest college chant he’d ever heard.  American athletes provided a rendition of it for the King of Belgium at the 1920 Olympics.

Kansas troops used the chant when fighting in the American- Philippine war in 1899, during the Boxer Rebellion in China, and in World War II.  The atmosphere at Allen Fieldhouse is electric.

While the opposing lineup is introduced, students feign reading The Daily Kansan to demonstrate their lack of interest.  Following a short video highlighting the history of Kansas basketball, students rip up their newspapers and toss the confetti as Jayhawk players are introduced.

When an opposing player fouls out, Jayhawk fans rise in unison, lift their arms overhead and slowly wave them back and forth, a tradition known as “waving the wheat.”  After each victory, fans perform the Rock Chalk chant, followed by the singing of “A Hot Time in the Old Town.”

KU has produced seven national college players-of-the-year, most recently Frank Mason III, in 2017.  Five Jayhawks have been named Most Outstanding Player of the NCAA tournament.

Kansas has had 84 players drafted into the NBA, with 37 of them going in the first round.  After being named 1952 College Player-of-the-Year, Jayhawks center Clyde Lovellette was the ninth overall pick of the Minneapolis Lakers.  Lovellette is the first player in basketball history to play on teams that won an NCAA title, Olympic gold medal, and NBA championship.

Wilt Chamberlain played two varsity seasons for the Crimson and Blue but departed prior to his senior year to a one year, $ 50,000 contract with the Harlem Globetrotters.  Former Senator Bob Dole played for KU, as did Dean Smith, a future four-time national Coach of the Year at North Carolina.

Seven players and four coaches associated with the University of Kansas – including Lovellette, Chamberlain and Smith — are in the Naismith Hall of Fame.

Jayhawk basketball is steeped in tradition.  Fans line up early for Late Night In the Phog, a free-admission event at Allen Fieldhouse that includes music by the KU pep band, a skit by the basketball team, video highlights from past seasons, and the team’s opening practice of the year.

The two winningest programs in college basketball history square off tonight, as Kansas and Kentucky go at it at the United Center in Chicago.