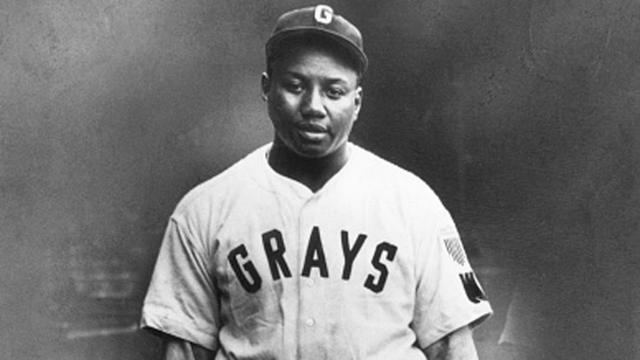 Josh Gibson was the black Babe Ruth.  Or was The Bambino the white Josh Gibson?

One of the most powerful sluggers of all time, Gibson was the Negro leagues’ greatest home run hitter.  “Josh was a better power hitter than Babe Ruth, Ted Williams or anybody else I’ve ever seen,” said former Cleveland Buckeye pitcher and manager Alonzo Boone, who faced them all.  “Anything he touched was hit hard.  Shortstops would move to left field when Josh came to the plate.”

Gibson never played in the major leagues because of an unwritten “gentleman’s agreement” that prevented African-American players from signing with major or minor league teams.  Between 1929 and 1946, he competed in four leagues, including the Dominican, Mexican, Puerto Rican and Negro leagues.  Gibson left an indelible impression on those who saw him play during his 17-year career.  His legend was larger than life, but statistics from the Negro leagues are largely incomplete, leaving no published records of his career stats.

In 1972 – a quarter-century after his death – Gibson became the second player [behind Satchel Paige] from the Negro leagues elected to the Baseball Hall of Fame.  His plaque in Cooperstown states he hit “almost 800 home runs in league and independent baseball during his 17-year career,” and that Gibson compiled a lifetime batting average of .359.  A playful and modest man, Gibson won five league batting titles.  In 1934, he reportedly hit .517 with 84 homers.

“It makes me sad to talk about Josh, because he didn’t get to play in the Major Leagues,” said Monte Irvin, who played for the Negro National League’s Newark Eagles before becoming a MLB All-Star with the New York Giants.  “When you tell people how great he was, they think you’re exaggerating.”

Gibson’s homers were gargantuan.  The Sporting News, one of the most reliable sources for baseball statistics, credited Gibson with hitting a home run at Yankee Stadium that struck two feet from the top of the wall circling the center field bleachers, 580 feet from home plate.  He and Mickey Mantle are the only players ever to knock one out of cavernous Griffith Stadium.  Washington Senators owner Clark Griffith once said that Gibson hit more home runs into Griffith Stadium’s left field bleachers than the entire American League.

“I played with Willie Mays and against Hank Aaron,” Irwin once said.  “They were tremendous ballplayers, but they were no Josh Gibson.”

At 6’1” and 215 pounds, Gibson was seemingly indestructible.  An agile catcher with a powerful arm and quick release, he made baserunners wary of trying to steal.  Gibson was the second highest-paid player in black baseball, behind Paige.  The two played together for the Pittsburgh Crawfords in 1936, forming the most popular battery in Negro leagues history.

Born in Buena Vista, Georgia, December 11, 1911, Joshua Gibson moved with his family to Pittsburgh in 1923.  He quit school at 15 and a year later found work as an elevator operator at Gimbels department store, joining their amateur team as a third baseman.  In 1928, Gibson was invited to join the Pittsburgh Crawfords, the top semi-pro team in the area.  Two years later, the 18-year-old Gibson was recruited by the Homestead Grays, the preeminent Negro league team in Pittsburgh, to replace their injured catcher.

Gibson played for the Grays in 1930 and ’31, then jumped to the Crawfords, who had joined the new Negro National League, in 1932.  After winning three home run titles in five seasons, he returned to the Grays, leading them to seven league championships in nine years.  In 1943 and 1944, Gibson helped the Grays to back-to-back Negro World Series titles.

In early 1943, Gibson fell into a coma and was diagnosed with a brain tumor.  Declining surgery, he lived the next four years with recurring headaches and was prone to odd behavior.  On January 20, 1947, Gibson died of a stroke at 35, just three months before Jackie Robinson broke baseball’s color barrier.  Larry Doby, who became the first African-American to play in the American League in July 1947, felt that Gibson was the best black player in America.  “One of the things that was disappointing and disheartening to a lot of the black players at the time was that Jack was not the best player.  The best was Josh Gibson.”

The incomparable Josh Gibson was number 18 on The Sporting News list of the 20th Century’s “100 Greatest Players.”  Babe Ruth was ranked first.  Mr. Gibson was ranked highest among the five Negro league players to make the list, one spot above Paige.