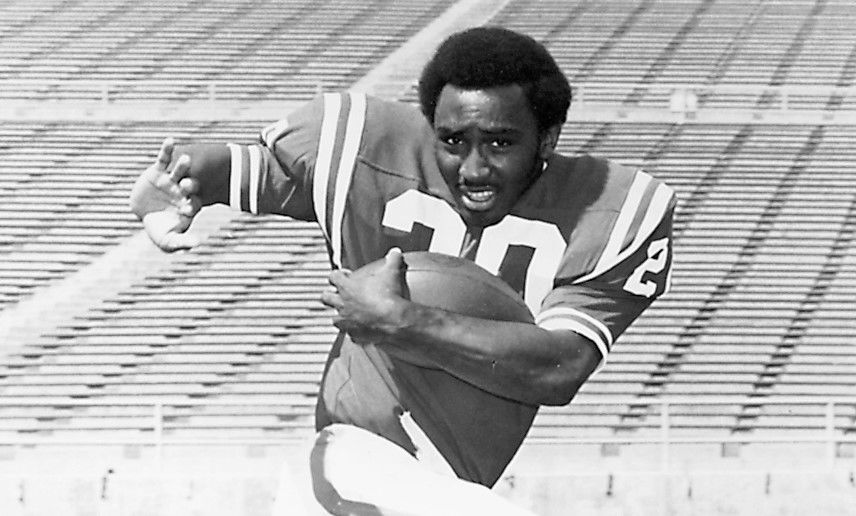 Johnny Rodgers is the greatest Nebraska Cornhusker of the 20th century.

Johnny The Jet did it with pizazz.  The first Nebraska player and first wide receiver to win the Heisman Trophy, Rodgers was perhaps the most electrifying punt returner in college football history.  Named the all-time best football player in the history of the Big 8 Conference, Rodgers helped Nebraska to national championships in 1970 and 1971 before going on to win the 1972 Heisman.

Voted the fifth-greatest athlete the state of Nebraska has ever produced, Rodgers was a Husker legend.  In three years at NU, he established a then-NCAA record with 5,586 all-purpose yards.  A two-time All-American, Rodgers set 41 school records, seven conference records and four NCAA marks.  In 1999, the wonderful wingback was named to college football’s All-Century Team.  The following year, Nebraska’s all-time leader in receptions and receiving yards was inducted into the College Football Hall of Fame.

I probably wouldn’t have won the Heisman if I hadn’t played on those two national championship teams.  They set the stage for me. – Johnny Rodgers.

Nebraska went 32-2-2 during The Jet’s three years in Lincoln.  After leading the Big 8 in receptions, receiving yards, receiving touchdowns, touchdowns from scrimmage and points as a senior, he was named Walter Camp Player of the Year.  Rodgers won the 1972 Heisman in a landslide, outpointing Oklahoma running back Greg Pruitt and Husker teammate Rich Glover.

Born in Omaha July 5, 1951, Johnny Steven Rodgers was a four-sport standout at Omaha Technical High School, alma mater of baseball hall of famer Bob Gibson.  Lacking the grades to get into USC, he enrolled at Nebraska, arriving in Lincoln just as assistant coach Tom Osborne was overhauling the Husker offense and switching to the I-formation.

As a sophomore, Rodgers rushed for 219 yards and two touchdowns while making 39 catches for 710 yards and seven scores.  Nebraska capped the season with a 17-12 victory over LSU in the Orange Bowl to finish 11-0-1 and claim the first national championship in school history.  The following season, Johnny Rogers became a household name.

Nebraska opened the 1971 season ranked second in the nation.  By Week 2, they had vaulted to number one.  Behind junior wingback Johnny Rodgers, who amassed 269 rushing yards and 956 receiving yards, the Huskers rolled, winning their first ten games of the season by an average of 32 ½ points.  As was so often the case in the early 1970s, the Big 8 title, an Orange Bowl bid and a shot at the national championship came down to the season finale with Oklahoma.

On November 25, 1971, the top-ranked Huskers traveled to Norman to take on number-two Oklahoma in the Game of the Century.  It was one of the most anticipated matchups in college football history: two undefeated teams playing before a national TV audience on Thanksgiving Day.  Four minutes into what would turn out to be a slugfest, The Jet fielded an OU punt at his own 28-yard line, then dipped and darted through Sooner defenders to score the first touchdown of the game.  Nearly five decades later, it still ranks as one of the most iconic moments in the annals of college football.

Rodgers’ punt return set the tone for a 35-31 Nebraska victory, earning them a date with Alabama in the Orange Bowl.  The Huskers arrived in Miami a six-point favorite and riding a 31-game win streak.  The Crimson Tide came into the Orange Bowl undefeated and ranked number two in the nation.  On the final play of the first quarter, Rodgers scored on a 77-yard punt return and the rout was on.  Nebraska drubbed ‘Bama 38-6 to claim their second straight national championship and Johnny Rodgers established himself as the most dangerous weapon in college football.

Named in honor of Johnny Rodgers, the Jet Award is given annually to the top kick returner in college football.  First presented to Arkansas’ Joe Adams in 2011, past Jet Award winners include Tavon Austin, Ty Montgomery, Christian McCaffrey and Tyler Lockett.

Like Desmond Howard, whose 93-yard punt return against archrival Ohio State before a national TV audience secured him the Heisman Trophy, Johnny Rodgers’ Heisman was cemented against Oklahoma in the Game of the Century.  His winning the 1972 Heisman was a foregone conclusion – a formality, really.  As a senior, the Nebraska flash reeled off 1,361 yards from scrimmage and scored 19 touchdowns.  And, as all the great ones do, he saved his best for last.

Nebraska went a disappointing 8-2-1 in 1972 to finish the season #9.  The Huskers earned a bid to the Orange Bowl to face #12 Notre Dame in what would be the final game of both Rodgers and head coach Bob Devaney’s Nebraska careers.  Rodgers shined, rushing for three touchdowns, catching another and throwing a 52-yard touchdown pass to splint end Frosty Anderson as NU drubbed the Irish 40-6.

A first-round pick of the San Diego Chargers in the 1973 NFL draft, Rodgers opted for the riches of the Canadian Football League.  He signed with the Montreal Alouettes, where he became a star.  Rodgers was named 1973 CFL Rookie of the Year and helped Montreal to the 1974 Grey Cup.  In four CFL seasons, he amassed 6,354 total yards, scored 35 touchdowns and was a three-time All Pro.  Deciding to try the NFL, Rodgers signed with the Chargers in 1977 but played only 17 games before a knee injury ended his career.

As an 18-year-old college freshman, Rodgers stole $91.50 from a Derby gas station in Lincoln.  He was caught and convicted of robbery.  The felony theft was fully pardoned by a Nebraska judge in 2013.  Almost three decades after leaving school, Mr. Rodgers returned to Nebraska to get his degree.  He currently lives in Omaha, where his is a businessman and volunteers as a youth counselor.

On this date in 1972, Nebraska senior Johnny Rodgers was awarded the 38th Heisman Trophy at the Downtown Athletic Club in New York City.