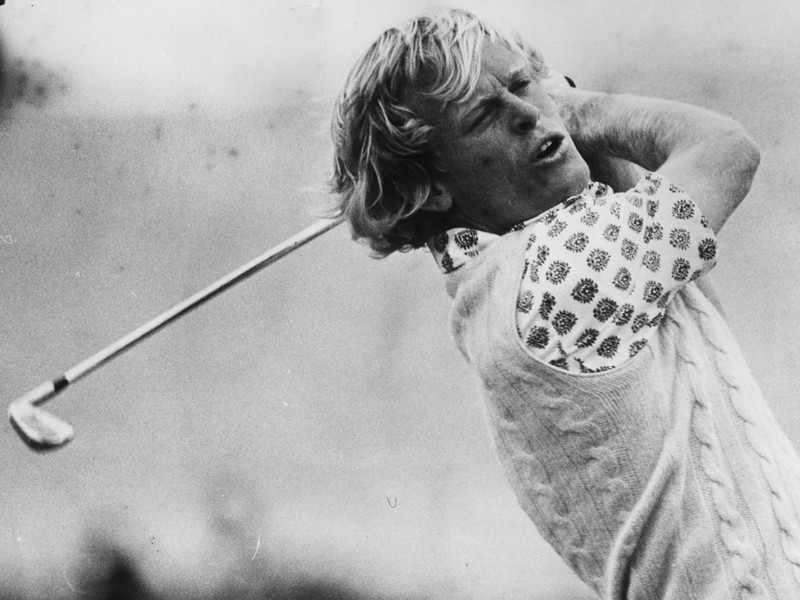 Miller may have been the best iron player ever to play the game.  In his prime, he hit the ball consistently closer to the pin than anyone.  Fred Couples described him as “probably the best ball-striker ever.”  Aggressive and accurate, Miller fired at the flag.  “I felt that I could knock down the pin from anywhere with my irons,” said the 1974 Player of the Year.  “I played some golf that I think is unequaled.”

In the mid-1970s, Miller was magnificent.  In 1974 and 1975, he won a dozen tournaments.  Miller won five of the first 11 events of 1974, then three more.  The next year, he won four.  Dubbed the “Desert Fox” for his success in the Southwest, Miller won the Tucson Open four times, along with two wins in Phoenix and a pair in Palm Springs.  At the 1975 Phoenix Open, the swashbuckling blonde shot 260 to win by 14.  The next week at Tucson, he closed with a final round 61 to win by nine.  At the Bob Hope three weeks later, the Desert Fox finished 21-under-par to claim his third winner’s check in five weeks. “It was sort of a golfing nirvana,” said Miller.  “I’d say my average iron shot for three months in 1975 was within five feet of my line.”

With 25 PGA Tour wins – including two majors – Miller played on two Ryder Cup teams.  He has 105 top-ten finishes and is a three-time runner-up at the Masters, including the 1975 event where he battled Jack Nicklaus and Tom Weiskopf in one of the most epic finishes Augusta National has ever witnessed.  The Tour’s leading money winner in 1974, Miller had 17 top-ten finishes in majors, including five straight at the Open Championship between 1973 and 1977.

Brash, handsome, and stylish, Miller was the epitome of 1970s cool.  Decked in white belt and plaid pants, the golden-haired mop-top was targeted by Sears, Roebuck & Co. – then America’s largest retailer – as the centerpiece of their men’s clothing line, “The Johnny Miller Collection.”  Off the course, Miller was, in his own words, “A salable product.”  Between the ropes, he was dominant, surpassing Jack Nicklaus in 1974 as golf’s all-time leading money winner.

Born in San Francisco April 29, 1947, John Laurence Miller was raised a Mormon.  He learned to play golf under the watchful eye of his father, Larry.  “I was very lucky because my father was always positive and never pushed,” said Miller.  “He called me ‘Champ.’”  Miller grew up playing the famed public courses in San Francisco before earning playing privileges at the Olympic Club.  He attended Abraham Lincoln High School, alma mater of 1964 U.S. Open champion Ken Venturi and the only high school in America to produce two U.S. Open winners.  A teen prodigy, Miller won the San Francisco city junior title at 16, then took the U.S. Junior Amateur in 1964.  He earned a scholarship to BYU, where he led the Cougars to two conference championships and was the first BYU golfer named first team All-American.  After qualifying for the 1966 U.S. Open at Olympic Club in the summer after his freshman year, Miller tied for eighth and finished as low amateur, earning him an invitation to the 1967 Masters.

One year after winning the 1968 California State Amateur Championship, Miller graduated BYU with a phys ed degree and joined the PGA Tour.  After tying for second at the 1971 Masters, the slender Californian earned his first professional win, beating future Tour commissioner Deane Beman by five shots at the Southern Open later that year.

On Father’s Day 1973, Johnny Miller shot a round for the ages.  Coming into the U.S. Open at Oakmont Country Club outside Pittsburgh, the 26-year-old Miller had just two Tour wins in four years, but had recorded eight top-ten finishes.  After carding a 76 at Oakmont on Saturday, he trailed by six shots entering the final round.  Miller was white-hot on Sunday.  He birdied the first four holes and continued to shoot at the flag.  Miller knocked it to within six feet or closer on six holes, and inside 15 feet on five more.  The fearless bomber hit all 18 greens in regulation and made nine birdies with one bogey for a 63 to win by one.  Only six players, including Miller, shot under par that day on one of the most demanding courses in the world.  It was the lowest round ever to win a major championship [tied by Henrik Stenson at the Open Championship in 2016] and remains the most remarkable final round in majors history.

At the 1976 Open Championship at Royal Birkdale, Miller trailed 19-year-old Seve Ballesteros by two shots going into the final round, but crafted a then-course record 66 to win by six.

After Birkdale, Miller lost his focus.  His priorities changed as he and wife Linda started a family [the Millers have six children].  Bored with golf, the 6’2” string bean spent a summer working on his ranch.  Upon his return to golf, Miller found that his bulkier body could not repeat his old swing.  Never a strong putter, Miller contracted the yips and did not win again until 1980.  Following his win at the Open Championship in 1976, Miller won only seven more tournaments.  His last victory came in 1994, when, at 46, he putted with his eyes closed to win the Pebble Beach Pro-Am by one shot.

One of golf’s best ball-strikers went on to become the finest analyst in history.  Like football’s John Madden, Miller was brilliant in the arena and even better in the booth.  Before Johnny, golf analysts would fawn over their brethren, broadcasting in hushed, reverential tones.  Miller changed all that when he joined NBC in 1990.  Refreshingly insightful, the outspoken Miller occasionally sparks controversy by speaking his mind.  The fearlessness earns him accolades and haters, but for 17 seasons Miller has partnered with Dan Hicks as the best team in televised golf.  This past season was Johnny’s 28th year in the booth and the last year of his contract with NBC.  Now 70, he has agreed to a one-year extension for 2018.

“My father always said that if you want to be the best, you would have to do a lot of things others were not willing to do.”