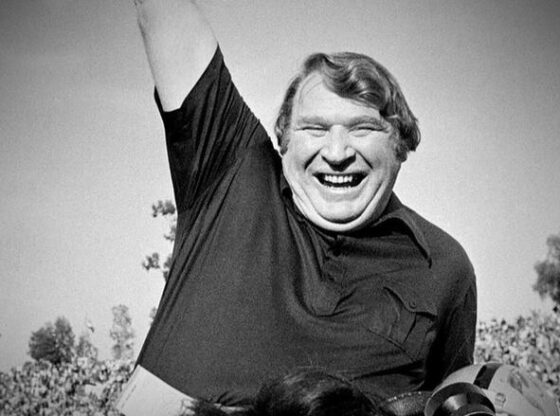 John Madden is the winningest football coach of the Super Bowl era, a best-selling author, and the greatest color analyst in the history of televised football.

In ten seasons as head coach of the Oakland Raiders, Madden never had a losing record.  His teams won seven division titles, including five in a row, and one Super Bowl.  They made eight playoff trips and got at least as far as the conference championship game seven times.  Madden compiled a regular-season career winning percentage of .763, the best in NFL history among coaches with at least 100 games.  Only George Halas and Curly Lambeau reached 100 career wins at a younger age.

Born in Austin, Minnesota, on this date in 1936, John Earl Madden is the son of an auto mechanic.  He grew up in Daly City, California, where he was a three-sport star at Jefferson High School.  Recruited to play football at the University of Oregon, he transferred to the College of San Mateo before settling at Cal-Poly in San Luis Obispo, along the California coast about 200 miles north of Los Angeles.  Madden played catcher on the baseball team and was a two-way lineman in football.  After helping the Mustangs to an 18-2 record in his two-year varsity career, Madden was named to the 1958 All-Conference Team as an offensive tackle.  After earning a degree in education, he was selected by the Philadelphia Eagles in the 21st round of the NFL Draft, but a knee injury suffered during training camp ended his playing career.

In 1960, Madden returned to California and was hired as an assistant coach at Allan Hancock Community College in Santa Maria.  He was promoted to head coach in 1962 and, following the 1963 season, was hired as defensive coordinator at San Diego State University.  He served under the great Don Coryell at SDSU through 1966, when Al Davis hired Madden to coach linebackers for the Oakland Raiders.  He made an immediate impact, helping guide the Raiders the 1967 AFL title.  Tired of Al Davis’ meddling, Raiders head coach John Rauch left Oakland for the same job with the Buffalo Bills.  Rauch must have really been fed up, as the Raiders were one of the best teams in football and had just played in two consecutive AFL Championship games.  Conversely, the lowly Bills were coming off a 1-12-1 season.  On February 4, 1969, Davis tapped John Madden to replace Rauch, making the 32-year-old Madden the youngest-ever head coach in the AFL.  It proved to be the best hire in the rich history of the Silver and Black.

Madden was obsessed with winning.  “I’m not into gardening or any other hobbies,” he said.  “I don’t fish or hunt.  I’m in football.”  In his first season at the helm, Madden was named Coach of the Year after the Raiders went 12-1-1 and won the AFL West.  The fiery Madden was a perfectionist, demanding his team to be fit and focused, but he was considered a player’s coach.  “The fewer rules a coach has,” preached Madden, “the fewer there are for a player to break.”  With a Master’s in Education, he loved to teach.  His Raider teams won ten or more games six times during his decade-long tenure, including 17 straight between 1976 and 1977 – one shy of the all-time record for consecutive wins.  Madden won seven division crowns and finished second in his three other seasons.  In 1976, the Raiders went 13-1 and trounced the Minnesota Vikings, 32-14, in the Super Bowl.  Madden was so absorbed coaching the Raiders that he forgot the age of one of his sons, thinking the boy was 12 when he was actually 16.  “Coaching isn’t work.  It’s a way of life.  No one should go into coaching unless he couldn’t live without it.  Football is what I am.”  The demands of the job began to take their toll and the 42-year-old Madden retired following the 1978 season, citing a stomach ulcer and fatigue.  “The high of a win is never as high as the low of a loss, and the longer you are in this business, the wider that gap becomes,” Madden said.  He went 103-32-7 in ten NFL seasons and had a winning percentage of .685 against the ten other hall-of-fame coaches he faced during his career.

As great a football coach as Madden was, he was even better as a broadcaster.  In 1979, he joined CBS as color analyst for NFL telecasts.  Two years later, he was promoted to the network’s top team, where he joined the legendary Pat Summerall .  With a lively and flamboyant delivery, Madden’s analysis was insightful and entertaining.  He made watching football fun – Boom! Whap! Bang! Doink! – became part of the experience, and Madden made the telestrator a staple of sports television coverage.  He had the unique ability to speak to both the novice fan as well as the football expert at the same time – usually enlightening both.  He and Summerall formed the greatest duo in football broadcasting history, coming into American living rooms from 1981 to 2001.  They worked a record eight Super Bowls together and broadcast the annual Thanksgiving Day game for CBS [and later for Fox] for two decades, with Madden awarding “turducken” drumsticks to the player of the game.

Madden took the advice of boyhood friend and former coach John Robinson and created the annual All-Madden Team, a group of players Madden thought represented football and played the game the way he thought it should be played.  “What does it mean to be All-Madden?  It’s a whole range of things,” the coach-turned-analyst explained. “It’s about Jack Youngblood playing with a broken leg.  Reggie White making the other guy wish he put a little more in the collection plate at church.  It’s about a guy who’s got dirt on his uniform, mud on his face, and grass in the earhole of his helmet.”  Madden moved to ABC in 2002, partnering with Al Michaels on Monday Night Football telecasts for four seasons.  In 2006, NBC introduced Football Night in America and the concept of the Sunday night game, with Madden and Michaels calling the action.  Madden made television history in February 2009 when he called Super Bowl XLIII for NBC, making him the only broadcaster in history to call the NFL’s title game for each of the Big Four networks.  Today, Sunday Night Football is the benchmark of excellence in NFL broadcasting.

The wildly popular Madden was so good that, in 1994, he signed a four-year deal with Fox worth $ 32 million, more than any NFL player was making at the time.  In 1988, EA Sports released Madden NFL, one of the most sought-after video games ever produced.  Madden NFL has generated over four billion dollars since its release nearly 30 years ago.  After his coaching days ended, Mr. Madden stopped flying, as claustrophobia prevented him from sitting in an aircraft.  He began traveling the country in a customized coach-bus dubbed the “Madden Cruiser” before retiring from broadcasting in 2009.  The 73-year-old Madden was replaced by Chris Collingsworth, who said of his predecessor, “Without question, he is the greatest sports analyst of all time.”

John Earl Madden spent over four decades in the NFL, including ten as a head coach and 30 as a broadcaster.  He remains involved with the league and is harsh critic of the league’s biggest fiasco – the Thursday night game and its clownish uniforms.  “The NFL needs to dump Thursday night games,” Madden said during the 2016 season.  “Something has to be done.  It just doesn’t work.  It’s not only a fan thing.  It’s a team thing.  It’s a safety thing.”  In 2006, the greatest coach in Raiders history and 16-time Emmy Award winner was inducted into the Pro Football Hall of Fame.  His presenter was Al Davis, the man who gave him his first NFL job as a 30-year-old linebackers coach.