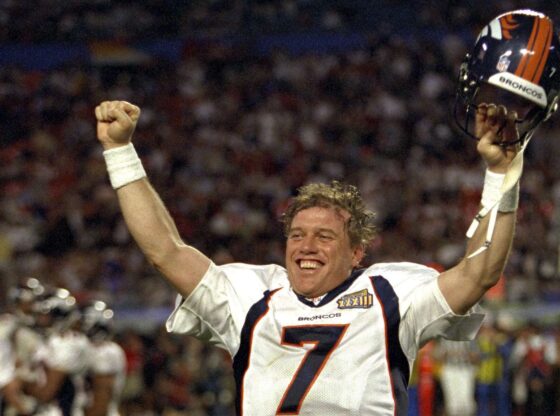 John Albert Elway, Jr. is one of the finest quarterbacks ever to play the game of football.

Born in Port Angeles, Washington on June 28, 1960, his father was a football coach at the high school and college level. The family moved around the Pacific Northwest for most of John’s early life and settled in California’s San Fernando Valley when the elder Elway took the head coaching job at Cal State-Northridge following John’s freshman year of high school. Elway played football and baseball at Granada Hills High School and starred in both sports. He was drafted by the Kansas City Royals in the 18th round of the 1979 Major League Baseball Draft [KC chose Dan Marino in the 4th round of that same draft] and he had over 60 scholarship offers to play football. He was the top rated prep quarterback in America and was named to the PARADE All America High School Football Team along with future NFL Hall of Famers Marino and Eric Dickerson.

John enrolled at Stanford University in 1979 and played baseball and football, setting nearly every Cardinal record for passing and total offense during his career. He was a two time Pac-10 Player of the Year, consensus All American and finished runner up to Hershel Walker for the 1982 Heisman Trophy. He won the Sammy Baugh and Pop Warner Trophy and continued to excel in baseball as well. The New York Yankees selected him 52nd overall in the 1981 MLB Draft, six spots ahead of future Hall of Famer Tony Gwynn. The Baltimore Colts took him with the first pick of the 1983 NFL Draft but, based on the advice of his father Jack, refused to play for the Colts. He threatened to play baseball for the Yankees so the Colts traded him to the Denver Broncos for two players and a first round selection in the 1984 draft.

Denver made the playoffs in Elway’s first two seasons and earned a trip to the Super Bowl in his fourth, losing to the New York Giants, 39-20. He played in two of the next three Super Bowls, losing both, before finally earning a trip back eight seasons later, winning Denver’s first world championship in 1997. The Broncos repeated in 1998 and Elway was named MVP of what would be his final NFL game.

Mr. Elway won two Super Bowls, five AFC championships and was league MVP in 1987. He played in nine Pro Bowls, was twice named AFC Offensive Player of the Year and made the NFL’s All Decade Team for the 2000’s.

He holds most Denver Bronco passing records and the team retired his # 7 jersey. Stanford retired his # 7 jersey in 2013 and he is the oldest quarterback, at age 38, to win a Super Bowl. Elway was inducted into the College Football Hall of Fame in 2000 and Pro Football Hall of Fame in 2004. The Sporting News ranked him as the third greatest quarterback of all time [behind John Unitas and Joe Montana] and he is one of three quarterbacks in NFL history to be drafted with the first overall pick and go to the Hall of Fame [Terry Bradshaw, Troy Aikman].