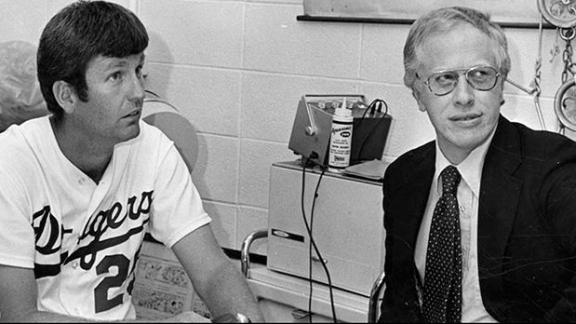 Perhaps no man in history has had a bigger impact on the game of baseball than Dr. Frank Jobe.

Born in North Carolina and raised outside Chattanooga, Frank James Jobe enlisted in the U.S. Army after graduating high school in 1943.  A medical staff sergeant, he was captured by German soldiers during the Battle of the Bulge.  Jobe escaped, and was later awarded a Bronze Star, Combat Medical Badge and Glider Badge.

After World War II, Jobe used the G.I. Bill to complete his bachelor’s degree, then graduated from Loma Linda University Medical School in 1956.  He worked for three years as a general practitioner before completing a residency in orthopedic surgery at L.A. County Hospital.  In the mid-1960s, Jobe began to consult with the Los Angeles Dodgers and founded the Kerlan-Jobe Orthopedic Clinic.  Dr. Jobe officially joined the Dodgers’ medical staff in 1968.

In 1974, 31-year-old Tommy John was 13-3 with a 2.59 ERA when he felt something pop in his throwing elbow while pitching in the third inning of a game against the Montreal Expos on July 17.  Dr. Jobe looked John over and knew the left-hander had torn his ulnar collateral ligament.  A few weeks of rest didn’t help, which is when Jobe suggested a radical new procedure.

Jobe told the pitcher the chances of success were one in a hundred.  John had no other option.  He could either have the procedure and potentially save his career, learn to pitch with greatly diminished stuff, or retire.  John went with option one.

On September 25, 1974, Dr. Frank Jobe performed the first-ever elbow reconstruction surgery, a procedure now commonly known as Tommy John surgery. “Elbow reconstruction is a surgical graft procedure,” explained Clare Rosa, CEO of Boston-based Endoscopic Specialties.  “Holes are drilled in the elbow and the UCL in the median elbow is replaced.  A tendon from elsewhere in the body – usually the wrist or forearm – is woven into a figure-eight pattern to form a new ligament.”

Formerly a career-ending injury for a pitcher, UCL repair became commonplace in baseball.  It allowed youth players to continue to pursue their baseball dreams and rescued the careers of countless big leaguers.

Prior to the injury, Tommy John had pitched 11 major league seasons.  He had thrown 200 or more innings five times, including 269 with the Chicago White Sox in 1970.  A crafty southpaw, John was named to the 1968 American League All-Star team, a season in which he posted an ERA of 1.98.

Tommy John pitched with his new elbow until he was 46.  He was the oldest player in MLB when he retired in 1989.  John decided to hang up his spikes when Mark McGuire, the son of his dentist, got two hits off him.  “When your dentist’s kid starts hitting you,” said John, “it’s time to retire.”

Dr. Jobe’s elbow reconstruction surgery was revolutionary.  More than 1,100 baseball players – from youth players to major leaguers —  have undergone Tommy John surgery.  A 2013 study found that about one-third of the active pitchers in the majors had had Tommy John.  Several stars have had their careers saved by the procedure.  Former Chicago Cubs fireballer Kerry Wood, who underwent Tommy John in 1999, said he threw harder after the surgery than before.  2005 NL Cy Young Award winner Chris Carpenter had his career saved by the procedure, as did seven-time All-Star Billy Wagner.

Stephen Strasburg was one of the most coveted prospects in baseball history when the Washington Nationals made him the first overall pick of the 2009 draft.  After tearing his UCL in August 2010, Strasburg underwent reconstructive surgery.  Thanks to Dr. Jobe’s pioneering procedure, Strasburg has returned to make three All-Star teams and become one of the most dominant right-handers in the National League.

David Wells had Tommy John surgery while still in the minor leagues.  He went on to make three All-Star teams, throw a perfect game in 1998, and anchor the staff of two World Series champions [Blue Jays and Yankees].  In 2015, John Smoltz became the first pitcher having undergone Tommy John surgery to be inducted into the Baseball Hall of Fame.

The four-time All-Star pitched 4,710 innings and struck out 2,245 batters.  His 288 wins are the most by any pitcher not in the Baseball Hall of Fame.

Dr. Frank Jobe pioneered the most famous surgery in sports.  He changed the course of baseball history when he repaired Tommy John’s elbow in 1974.  He also performed the first major reconstructive shoulder surgery on a big league player.  In 1990, Jobe repaired the throwing shoulder of Dodger star Orel Hershiser, allowing the Bulldog to pitch for another decade.

Sadly, neither John nor Jobe are in baseball’s hall of fame — a travesty!  It is impossible to measure their impact on the game.

On this date in 1974, Tommy John tossed a five-hit, complete game shutout over the Pittsburgh Pirates at Dodger Stadium.  The left-hander ran his record to 9-1.  Nine starts later, John tore his UCL.

Whitey and Zack
Over Rated !
The Sixth Man