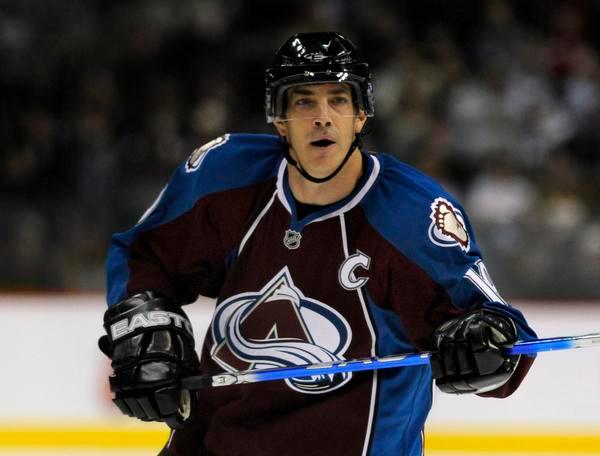 Joseph Steven Sakic is the pride and joy of Burnaby, British Columbia.

Born to Croatian parents in Burnaby on July 7, 1969 he did not learn to speak English until kindergarten. He attended his first NHL game at the age of four and decided immediately afterward that he wanted to become a hockey player. As a smaller player he was forced to use skill rather than size to excel and modeled himself after his idol, Wayne Gretzky. He played for Burnaby North Secondary School before joining the Lethbridge Broncos of the Western Hockey League in 1985-86. The team relocated to Swift Current, Saskatchewan the following season and Sakic won the WHL Rookie of the Year award. The following year he was named WHL’s Most Valuable Player and Canadian Major Junior Player of the Year. He was drafted with the 15th overall pick in the 1987 NHL Entry Draft by the Quebec Nordiques and made his NHL debut in 1988, registering an assist against the Hartford Whalers. He scored his first NHL goal two days later.

He was named team captain in 1992 and led the Nordiques to the playoffs for the first time in six years and set a franchise record for wins and points. He also scored over 100 points in three of his first five years in the NHL. The franchise was sold and relocated to Denver prior to the start of the 1995-96 season and was renamed the Colorado Avalanche. The 5’11”, 195 pound centre scored 120 points that year and led the Avalanche to the Stanley Cup championship, winning the Conn Smythe Trophy as most valuable player of the playoffs in the process. He led the team to three straight division titles before returning to the Stanley Cup Finals in 2001, where they beat the New Jersey Devils in 7 games. “Super Joe” won the Hart Memorial and Lady Byng Memorial Trophies as well as the Lester B. Pearson Award following the season.

Joe Sakic played 20 seasons in the NHL and was 13 times an All-Star. He holds Nordiques/Avalanche franchise records for goals [625], assists [1,016], points [1,641] and games [1,363]. He is the became the 11th player in league history to record 1,000 assists and 1,500 points and is the second oldest player, behind Gordie Howe, to record a 100 point season when he did so in 2006-07 at age 37. Sakic had an extensive international career as well, leading Team Canada to the 2002 gold medal while being named MVP of the Winter Olympics Ice Hockey Tournament in Salt Lake City. He is one of nine Canadian players in the Triple Gold Club which consists of winning an Olympic gold, World Championship gold and Stanley Cup, which the International Hockey Federation deem the “three most important championships in the sport.”

Joe Sakic retired as a player on this date in 2009.