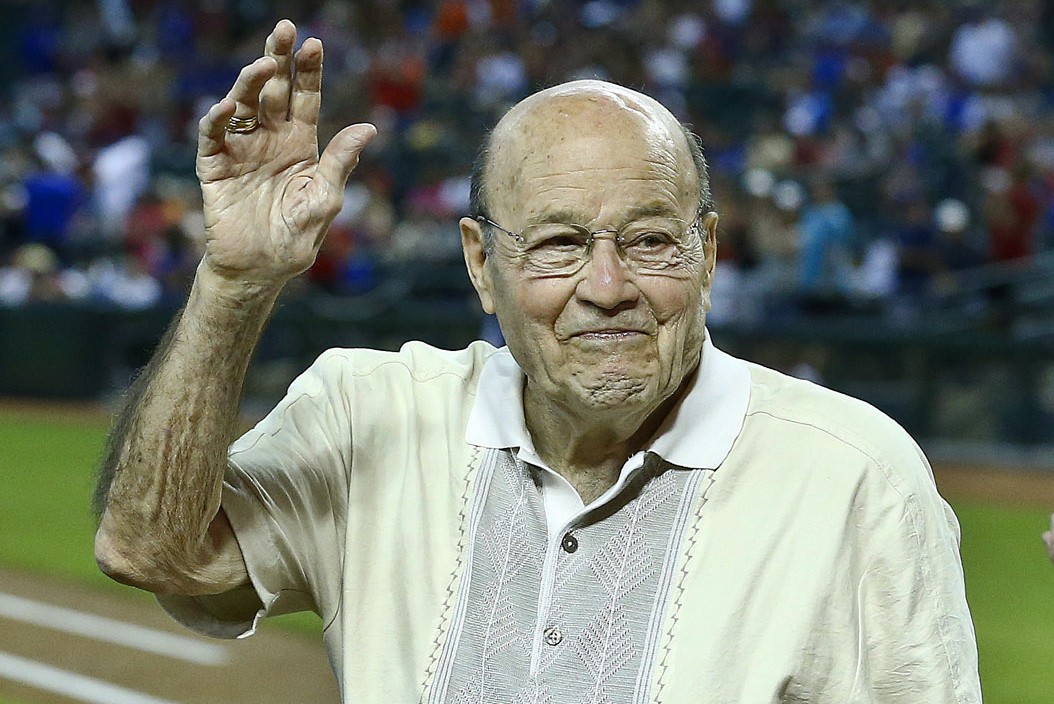 Joe Garagiola grew up on Elizabeth Street, across from Yogi Berra.  After Cardinals’ broadcaster Jack Buck moved onto the block early in his broadcasting career, it became known as Hall of Fame Place.

Born in St. Louis, Missouri, February 12, 1926, Joseph Henry Garagiola [Gar-Ajj-e-O-luh] was raised on the Hill, an Italian working-class neighborhood located on high ground south of Forest Park.  His father, Giovanni, was an immigrant laborer who did not understand why his son wanted to spend so much time playing baseball.  New York Yankee’s Hall of Famer Yogi Berra, born nine months to the day earlier than Joe, grew up directly across from the Garagiolas on Elizabeth Street and was Joe’s best friend.  Garagiola and Berra attended South Side Catholic High School [now St. Mary’s] before Garagiola—who scouts considered the better prospect—signed with the hometown Cardinals at 16.  He spent the following season with the AA Columbus Red Birds in the American Association where, at 17, he remains the youngest player in that franchise’s history.  After spending a year stationed in the Philippines with the U.S. Army, Garagiola returned to make his big league debut with the Cardinals as a catcher in May 1946, the same year Berra came up with the Yankees.  That autumn, the Cardinals met the Boston Red Sox in the only World Series appearance of  Garagiola’s career.  The rookie hit .316 during the Series, including going 4-for-5 in Game 5, and started Game 7, which the Cardinals won, 4-3, to claim the world championship.  The season would be the best of Garagiola’s career, as he bounced from Pittsburg to Chicago to the New York Giants in the following eight years.  After playing 676 games and batting .257 over nine seasons, the 28-year-old Garagiola retired following the 1954 season.

In April 1954, Garagiola testified before a U.S. Senate subcommittee investigating monopoly practices in baseball.  When the subcommittee chairman suggested the Cardinals were guilty of tampering by improperly trying to lure him from the Cubs, Garagiola replied, “Senator, how can you tamper with a .250 hitter?”  His likeability led to a broadcasting job with the Cardinals, where he worked with Jack Buck [Daily Dose, 2/17/16] and Harry Carey calling games for KMOX radio.  Garagiola began working nationally in 1961 before becoming the Yankees play-by-play man in 1965.  A highlight was calling the 500th home run of Mickey Mantle’s 536-home-run career.  “Me and the Mick combined for nearly 600 homers in our careers,” cracked Garagiola.  He had more success in broadcasting than he ever did playing.  “Each year I don’t play,” said Garagiola, “I get better.”  Garagiola called national games for NBC and the Cardinals.  He worked two stints co-hosting NBC’s Today Show; with Barbara Walters and Hugh Downs in the early 70’s, and with Bryant Gumble and Katie Couric in the early 90s.  Mr. Garagiola served as guest-host for the Tonight Show, interviewing John Lennon and Paul McCartney the only time any of the Beatles appeared on America’s top-rated late night program.  He also hosted various game shows, including To Tell the Truth.  Garagiola was a regular host of the Orange Bowl Parade on New Year’s Eve and later gained fame as co-host of the Westminster Kennel Club Dog Show, where he was later parodied by Fred Willard in the 2000 mockumentary, Best in Show.

One of Joe’s most appealing traits was his self-deprecating humor.  While playing for the 1952 Pirates—one of the worst teams in baseball history with a record of 42-112, GM Branch Rickey called Garagiola into his office.  “We’re turning the corner here,” assured Rickey.  “We’re coming out of the wilderness.  And you, my boy, figure in my plans.”  Three days later, Garagiola was traded.  Of his limited skills, Garagiola quipped, “When I was coming up, a scout reported that my speed was deceptive.  He said I was slower than I looked.”  Garagiola observed, “I went through baseball as the player to be named later.”  A good defensive catcher who hit 42 career home runs, Garagiola assessed his playing days.  “Being traded four times when there were only eight teams in the league tells you something.  I thought I was modeling uniforms for the National League.”  His nine years playing baseball were non-descript.  His 57 years in broadcasting landed him in the Hall of Fame, where he received the Ford C. Frick Award in 1991 for excellence in broadcasting.  Born on Lincoln’s birthday, Mr. Garagiola met three sitting U.S. presidents and a Pope.  More impressively, he knew Yogi.  “Not only was I not the best catcher in the major leagues,” recalled Garagiola, “I wasn’t even the best catcher on Elizabeth Street.”  When Garagiola asked his boyhood friend why he no longer went to Rigazzi’s, an Italian restaurant on the Hill, Berra replied, “Nobody goes there anymore.  It’s too crowded.”  While preparing to visit Berra at his new home in Montclair, New Jersey, Garagiola asked for directions.  “When you come to a fork in the road, take it,” explained Yogi.

Joe Garagiola led a rich, full life and was one of baseball’s most enduring personalities.  An folksy humorist, he was entertaining and engaging.  He called Arizona Diamondbacks games for the better part of two decades, and team President Derrick Hall said he was, “One of the biggest personalities this game has ever seen.”  Garagiola worked three World Series, three National League Championship Series, and three All-Star Games.  He shared the booth with Vin Scully [Daily Dose, 11/27/15], Dick Enberg [Daily Dose, 5/11/16] and Curt Gowdy [Daily Dose, 7/31/15].  Mr. Garagiola was an energetic crusader.  He helped found the Baseball Assistance Team, an organization that helps retired players in need, and campaigned forcefully against smokeless tobacco.  He cared deeply about his work.  “I want the broadcast to sound like two guys sitting at the ballpark, talking about the game, with the viewer eavesdropping.  It’s not High Mass, and it’s not a seminar,” said Joe. “It’s a ballgame.”

Joe Garagiola retired from broadcasting in 2013.  He died March 23, 2016 at age 90, exactly six months after the passing of his boyhood pal, Yogi Berra.

“At the apex of his career, the acclaim Joe Garagiola received was dreamlike.  No announcer, including John Madden in the 80s, was ever more popular.”- William Taffe