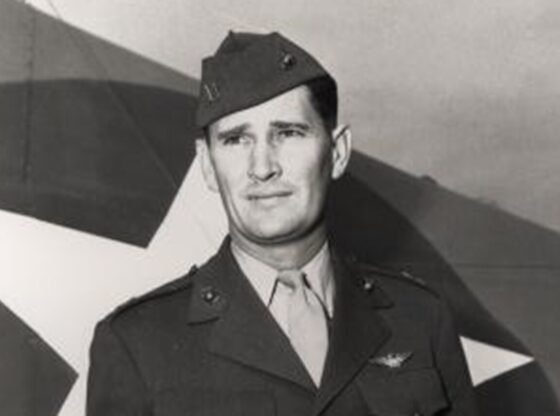 Joe Foss was an American hero.

Born in a farmhouse in Sioux Falls, South Dakota, April 14, 1915, Joe was the oldest son of Mary Esther and Frank Foss.  At 12, he and his father visited the airfield in nearby Renner to see Charles Lindbergh and his airplane, Spirit of St. Louis.  Four years later, Foss—who had a passion for flying– took his first airplane ride.  Before his 18th birthday, Foss lost his father to a farming accident and, after graduating from Washington High School, enrolled at the University of South Dakota.  He fought on the college boxing team, ran track and was a second-string guard on the Coyotes football squad.  While at USD, Foss learned to fly and served in the South Dakota National Guard.  Following graduation in 1939, he enlisted in the United States Marine Corps as a naval aviator.  After marrying his high school sweetheart, the former June Shakstad, in 1942, he shipped off that October for his first tour of duty in the Pacific Theatre.

USMC Major Joe Foss led a team of eight Wildcats—known as “Foss’s Flying Circus”—which shot down 72 Japanese aircraft during the Battle of Guadalcanal.  Foss personally downed 26 Japanese planes in 44 days to equal the accomplishments of America’s top World War I ace, Eddie Rickenbacker.  One of the two deadliest fighter pilots in the history of the USMC, Foss was dubbed America’s first “ace of aces” by the press.  In spring 1943, he returned to the U.S. and was awarded the Medal of Honor from President Franklin Delano Roosevelt for “aerial combat achievement unsurpassed in this war.”  Following a second tour of duty in the Pacific, Foss joined the Air National Guard, ultimately reaching the rank of Brigadier General.

After serving for two terms in the South Dakota legislature, Mr. Foss was elected, at 39, as the youngest governor in South Dakota history.  During his tenure, he accompanied Tom Brokaw—then a high school delegate from South Dakota Boys State—to New York City for a joint appearance on “Two for the Money,” a television game show.  After losing to George McGovern for a seat in the U.S. House of Representatives, Foss left politics.

In 1959, Foss became the first Commissioner of the newly formed American Football League [Daily Dose, 8/2/16].  He oversaw the growth of the upstart league and signed a lucrative TV deal with ABC.  Under Foss’s guidance, the AFL became the first pro league to put players’ names on the backs of jerseys.  The NFL used two clocks—one for the crowd and one for officials, while the AFL made the stadium game clock the league’s official timepiece.  While the NFL had a “cooling off” period after games, forcing reporters to wait for up to an hour before entering the locker room to speak with players, Foss provided immediate access to the press following a game.  Foss left his post as AFL Commissioner in 1966, two months before the announcement of the AFL-NFL merger and creation of the Super Bowl.

From 1964 to 1967, Foss hosted ABC television’s The American Sportsman [Daily Dose, 7/31/15], parlaying his love of the outdoors into a television career.  He later hosted The Outdoorsman: Joe Foss before serving as a Director for KLM Royal Dutch Airlines.  Starting in 1988, Foss was elected to two terms as president of the National Rifle Association and, in January 1990, was featured on the cover of Time magazine in his trademark Stetson hat–holding a revolver.  The father of a girl with cerebral palsy, Foss served as president of the National Society of Crippled Children and Adults—also known as Easter Seals.

In January 2002, 86-year-old Joe Foss was detained by security at Sky Harbor Airport in Phoenix.  He was on his way to West Point to address the Cadets at the Military Academy when airport security personnel confiscated and threatened to destroy his Medal of Honor.  “I wasn’t upset for me,” Foss said.  “ I was upset for the Medal of Honor, that they just didn’t seem to know what it even was.  It represents all of the guys who lost their lives-the guys who never came back….you’re supposed to know what the Medal of Honor is.”  Foss eventually was able to retain his medal by shipping it back to himself.

If there had been a film of his life, Joe Foss would have been played by John Wayne.  He was one of the greatest fighter pilots in the history of the U.S. Marine Corps and once told former U.S. Vice-President Dick Chaney, “There’s nothing I wouldn’t do for this country.”  Former astronaut and U.S. Senator John Glenn said, “Joe was one of our truly greatest patriots.  He lived it.”  Tom Brokaw wrote a book called The Greatest Generation in which he devoted an entire chapter to Mr. Foss.  “He had a hero’s swagger but a winning smile to go with his plain talk and movie star good looks,” wrote Brokaw.  “Joe Foss was larger than life.”

Mr. Foss, who received the Distinguished Flying Cross for “heroism or extraordinary achievement while participating in an aerial flight” died in Scottsdale, Arizona, on New Year’s Day in 2003.  The former South Dakota farm boy is buried at Arlington National Cemetery outside our nation’s capital.