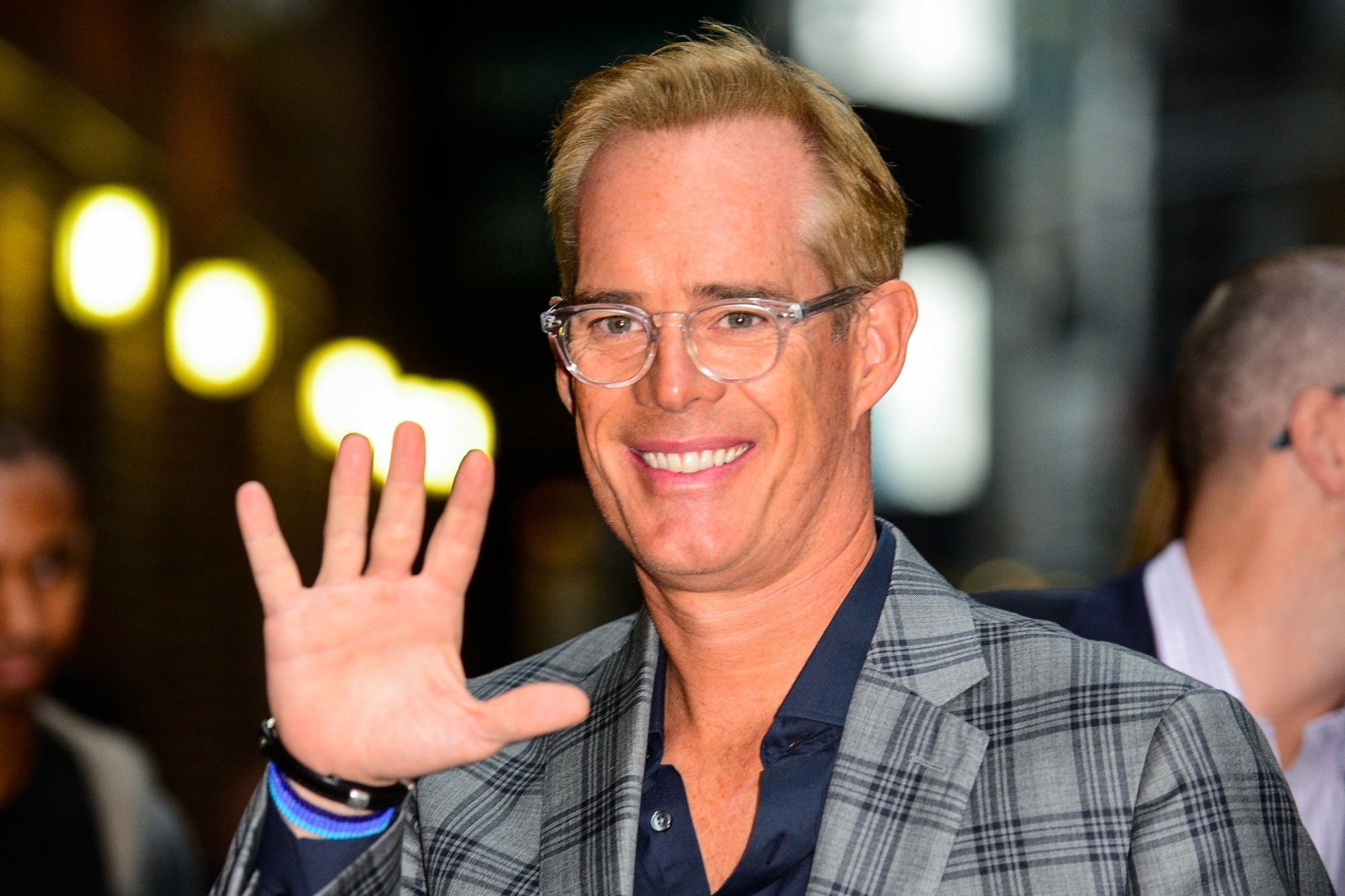 Born in St. Petersburg, Florida – the spring training home of the Cardinals – on this date in 1969, Joseph Francis Buck was the older of Jack and Carole’s two children.  He grew up in the Clayton-Richmond Heights area outside St. Louis, where his father, Jack, was the long-time voice of the Cardinals.  Young Joe was around the Cardinals all the time.  While his father prepared for the day’s broadcast, he hung around Busch Stadium, playing catch with Ozzie Smith before games and spending time in the locker room and dugout.  Once the games began, he’d head up to the booth.  “My summers were spent sitting literally nine feet behind my dad,” recalled Buck.  “I was on the road with him all the time.  I was in every National League city before I was 12.”  He was 13 when the Redbirds won the 1982 World Series.

On his 18th birthday – 30 years ago today – the teenage protégé was called to the mike by the legend.  “It’s the Cardinals and the Mets at Shea Stadium in 1987.  And I’m in the back of the booth, and he [Jack Buck] and Mike Shannon are broadcasting the game.  And my dad says, ‘Now to take us through the fifth inning, my son the birthday boy, Joe Buck.’  I’m pleading with him not to do the game, because I haven’t really been paying that much attention.  But he and Mike get up and leave.  He knew that I could handle it, because of all those broadcasts in an empty booth at Busch Stadium when I was 13, 14 and 15.  I’d broadcast the play-by-play into a tape recorder.  We would listen to the tapes in the car on the way home and he would tell me what he liked and what he didn’t like.  I just remember it felt natural…I’d been around it as much as anyone had ever been.’”

After graduating St. Louis Country Day School, Buck enrolled at Indiana University, majoring in English.  During his first two college summers, he called games for the Louisville Redbirds, St. Louis’ Triple-A affiliate in the American Association.  In 1989, Buck covered the AAA All Star Game as a reporter for ESPN.  Two years later, he began calling Cardinals games on KMOX, St. Louis’ 50,000-watt flagship station.  In 1992-93, Buck was the play-by-play voice for University of Missouri basketball.  While attending a Super Bowl convention in 1994, Carole Buck slipped a broadcast tape of her son to the wife of Ed Goren, now Vice Chairman of FOX Sports Media Group.  “See if you don’t hear something great,” said Carole.  The network called Joe shortly after to tell him he had three weeks to prepare for an audition as a football announcer.

In the fall of 1994, Joe Buck burst onto the national scene when, at 25, he became the youngest man ever to announce the NFL on network television.  In 1996, he was named FOX’s lead play-by-play man for Major League Baseball, teaming with Tim McCarver, who had worked with his father on CBS.  That fall, Buck became the youngest ever to broadcast a World Series for network television when he and McCarver called the 1996 World Series between the Yankees and Braves.  He replaced Pat Summerall as FOX’s top NFL play-by-play man in 2002.  When he stopped broadcasting Cardinals baseball in 2008 due to the demanding network schedule, he ended a 54-year run of Bucks [either Joe or his father] handling coverage of the team’s games.

Now in his 24th year with FOX, Buck has called five Super Bowls, including this year’s classic from Houston, where the Patriots came back from a 25-point second half deficit to win their fifth Lombardi Trophy.  He and Troy Aikman – the NFL’s longest-running broadcast team — just finished their 15th NFL season together.  A seven-time Emmy Award winner, Buck called his record 16th MLB All-Star Game in 2014, surpassing the legendary Curt Gowdy for most in history.  The 2016 Cubs-Indians World Series was his 19th for FOX, and he is also the network’s lead announcer for golf.  Jack and Joe Buck are the only father-son tandem to each call the Super Bowl on network television.

One of the most polarizing media figures in sports, Buck is not without his detractors.  His dry sense of humor is sometimes interpreted as smug.  “One critic says Joe tries to be funny,” said former baseball partner Tim McCarver.  “Not true.  He is funny.  There’s a big difference.”  Buck has stirred controversy, such as the time Minnesota Vikings wide receiver Randy Moss pretended to pull down his pants and moon Packer fans after catching a touchdown pass during a playoff game in Green Bay.  “That is a disgusting act,” opined Buck, after watching Moss briefly wiggle his backside against the goalpost.  He was called “boring” after failing, in the eyes of some, to sound more excited over David Tyree’s miraculous helmet catch [which Eli Manning has accurately called the luckiest play in Super Bowl history] that allowed the New York Giants to go on to win the 2008 Super Bowl.  Buck has been called biased, such as when he asked for a hug from his good friend Mark McGuire prior to interviewing the Cardinals slugger moments after McGuire broke Roger Maris’s single-season home run record in 1998.

While nepotism certainly played a role in Buck getting his first network job at 25, he has worked hard to get to the top of his profession.  Buck’s preparation and professionalism make him one of the best broadcasters in sports.  Like the great Pat Summerall, Buck omits needless words.  He is the anti-Gus Johnson, whose contrived enthusiasm is insulting and borders on the ridiculous.  “He defers to the game and puts himself below big moments,” observed Tom Verducci, who covered baseball telecasts with Buck for FOX.  Buck inherited his dad’s voice and his mother’s stage presence [Carole performed on Broadway].  Former Cardinals manager, Tony LaRussa, called the father L.J. –short for Legendary Jack.  “He [Joe] has done very well for himself,” explained LaRussa, “so I call him A.L, for Almost Legendary.”

Jack Buck made one of the greatest calls in baseball history, when Kirby Puckett’s walk-off homer in Game 6 of the 1991 World Series sent the Fall Classic to a deciding Game 7, scheduled for the following evening.  As Puckett’s hit cleared the wall in left center, Buck said –simply and eloquently – “We will see you tomorrow night.”  Twenty years later, David Freese of the Cardinals sent a pitch over the center field wall in the 11th inning to win Game 6 of the 2011 World Series, sending it to a deciding Game 7.  As Freese’s blast landed beyond the centerfield wall, Buck honored his father, who had died earlier that year.  In a spine-tingling moment seemingly scripted in broadcasting heaven, Joe Buck echoed his father’s words: We will see you tomorrow night.  “It just came out,” said Buck the following day.  “The more you try to plan out what you’re going to say in big moments, the more trouble you get into.  You have to trust your instincts that you’re going to say the right thing.”  Tim McCarver was in the booth for both of them.  “What rolled through my head was two decades of memories,” McCarver recalled.  “To see him enjoy that moment and get to remember his dad that way was what made it so wonderful.”

Happy 48th birthday to one of the best in the business.