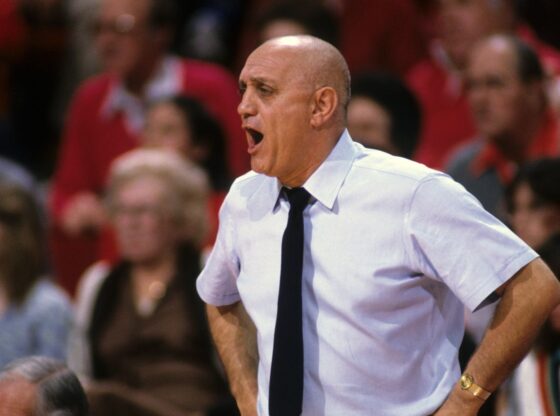 Jerry Tarkanian was a rebel with a cause.

A Division-I coach for 31 seasons, Tarkanian’s legacy is as complicated as any in college basketball history.  He coached in five decades at three different schools, compiling an overall record of 729-201. “Tark” was the 12th coach to amass 700 wins, and never had a losing season.  He was at the University of Nevada-Las Vegas [UNLV] for 19 years – going 509-105 — and made the Runnin’ Rebels a brand name.  Tarkanian led UNLV to three Final Fours in five years between 1987 and 1991 and was coach and architect of two of the best college basketball teams of all time: the 1990 national championship team and the 1991 Runnin’ Rebels, who won 27 straight games.  His teams looked glamorous, featuring a fast-break style of play, but it all started with defense, which Tark demanded of his players.  “Jerry had consistently high levels of success because his teams played hard defensively,” said Duke coach Mike Krzyzewski.  “He’s one of the truly remarkable defensive coaches.”

Tarkanian had a reputation as a rogue who would take in student-athletes other schools passed on and win with them.  He pioneered the use of junior college transfers and believed in giving second chances to troubled players.  “I need eight great players and four to cheer for them.” Tarkanian said.  He was incessantly dogged by the NCAA throughout his career on suspicions of cheating and academic irregularities.  “Tark the Shark” responded by challenging the organization that he derisively called “the NC-two-A” to also investigate larger, more powerful schools.  “The NCAA is so mad at Kentucky,” Tark said,” that it put Cleveland State on two more years’ probation.”  Tark fought the law and Tark won.  Mr. Tarkanian twice sued the NCAA for trying to run him out of college basketball and, in 1998, collected a $ 2.5 million settlement from college basketball’s governing body.

Born in the Cleveland suburb of Euclid, Ohio – home of the Softball Hall of Fame – August 8, 1930, Tarkanian was the son of Armenian immigrants who landed in the U.S. after escaping the Ottoman Empire during World War I.  After losing his father at 13, Tarkanian migrated to California and played basketball at Pasadena City College in 1950-51.  He then transferred to Fresno State, where he played backup point guard for the Bulldogs.  Tark graduated Fresno State, earned a master’s from the University of Redlands, then coached high school basketball in southern California for five years.  In 1961, he moved to the junior college level, with stints at Riverside City College and Pasadena City College.  After winning a record four straight California junior college championships – three at Riverside, one at Pasadena – he moved to Division I basketball, landing the head job at Long Beach State in 1968.

Tarkanian went 23-3 in his first season at Long Beach State, then made four straight NCAA tournament appearances.  In the 1971 West Regional final, Long Beach led top-ranked UCLA by a dozen points at halftime only to lose, 57-55.  The Bruins would go on to win their seventh title in eight years under coach John Wooden.  Wary of continuing in UCLA’s shadow, Tarkanian accepted a job to coach at UNLV in 1973.

Prior to Tarkanian’s arrival, UNLV was known as “Tumbleweed Tech.”  The basketball program had minimal fan support and little success.  Teaching an up-tempo style and stifling defense, Tark transformed UNLV from a small commuter school into a national powerhouse.  An innovator, his “amoeba” defense – a gambling-style zone setup – led to steals and fast breaks.  In an era before the shot clock or three-point shot, his 1977 team averaged a whopping 109 points per game.  In his fourth season in the desert, Tark led the Runnin’ Rebels to the first of four career Final Fours, where they lost to North Carolina, 84-83.  It would be a decade before they would return, losing to good friend Bob Knight and the eventual champion Indiana Hoosiers in 1987.  UNLV returned again in 1990, where they blew out Duke in the title game, 103-73.  It was one of the most dominant performances in NCAA Championship Game history, setting a record for largest margin of victory in a final.  The following year, the Rebs brought a perfect 27-0 record into the national semifinals before losing to Duke in one of the most shocking upsets in the history of March Madness.

In 1992 – two years after winning the national championship – a picture was published in the Las Vegas Review-Journal showing some UNLV players in a hot tub with a convicted game fixer.  Already on probation and with mounting negative publicity, UNLV acted swiftly and forced Tarkanian – who had guided the Runnin’ Rebs to ten straight Pacific Coast Athletic Association titles — to resign.  He coached briefly in the NBA with the San Antonio Spurs before a dispute with ownership led to his dismissal 20 games into the season.  Tark returned to Fresno State, where he guided his alma mater to six straight 20-win seasons and two NCAA tournament berths.  Tarkanian retired following the 2002 season.

The lasting image of Tarkanian is the ever-present towel in his mouth.  The practice of chewing on soaked towels began while he was coaching high school, when he would chew on soaked towels to ward off dry mouth.  In later years, the practice became more of a superstition as well as Tark the Shark’s endearing trademark.  Jerry Tarkanian was obsessed with winning.  It was once said Shark was “a guy who doesn’t know there is a war in Vietnam, but who knows where the best forward in the country is.”  An underrated teacher, Tark only twice failed to win 20 games in a season.  The 1987 UPI Coach of the Year had 39 of his UNLV players selected in the NBA draft, including Larry Johnson, the first overall selection in 1991, and Armen Gilliam, the second overall pick in 1987.

Tark was a celebrity in Vegas – he was beloved there — and tickets to UNLV games were a hot commodity during his tenure.  With no pro teams in the city, the Runnin’ Rebels were the center of attention.  His teams were as flamboyant as the city, with light shows and fireworks for pregame introductions and celebrities such as Frank Sinatra, Bill Cosby and Don Rickles sitting courtside in “Gucci Row.”  In 2015, Coach Tarkanian received a long overdue recognition — induction into the Naismith Basketball Hall of Fame.

In October 2013, UNLV dedicated a bronze statue of Jerry Tarkanian – seated on a folding chair, towel in mouth – as a tribute to the greatest coach in school history.  Mr. Tarkanian, who was in declining health, died a year-and-a-half later, in February 2015.  He was 84.