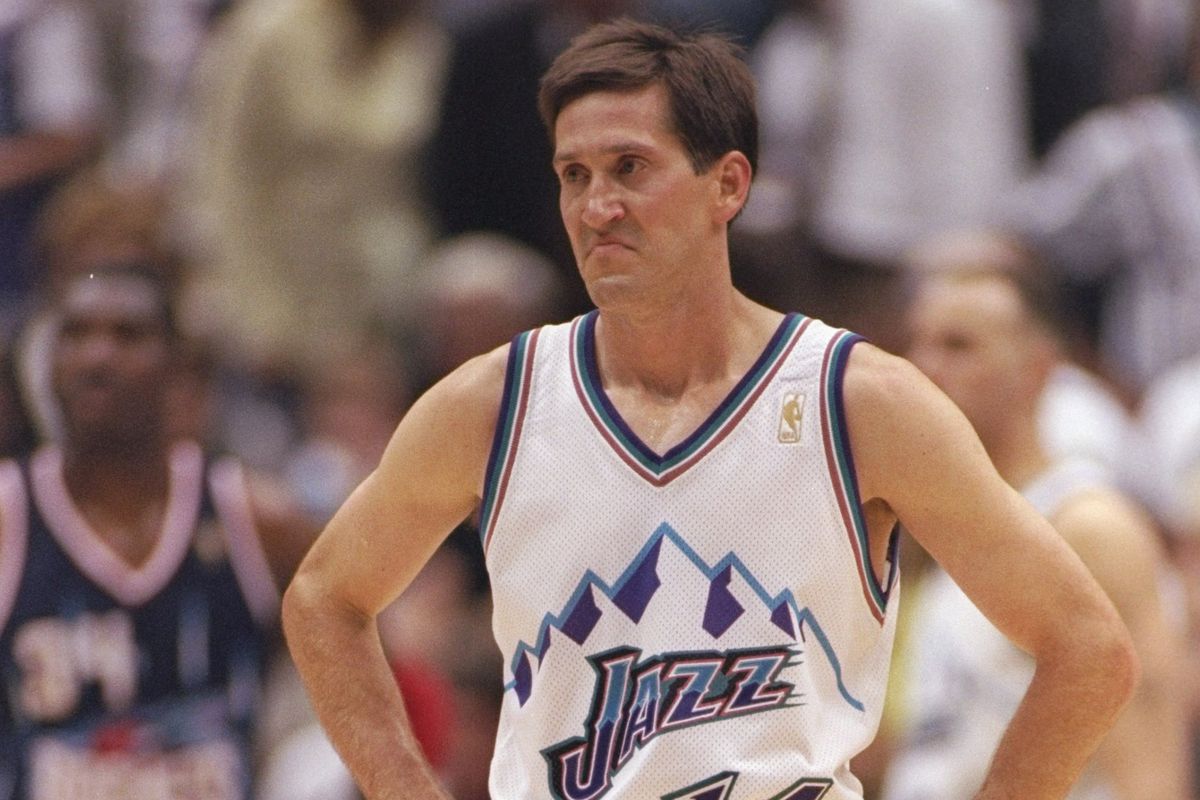 Jeffrey John Hornacek [horn-a-seck] was born in Elmhurst, Illinois, on this date in 1963.  After graduating from Gurrie Middle School, he attending Lyons Township High School—alma mater of David Hasselhoff—in nearby La Grange.  Hornacek played shortstop on the baseball team and led the Lions to the Sweet 16 of the IHSA state basketball tournament as a senior.  Lightly recruited coming out of L.T., several small colleges expressed interest but Hornacek wanted to play Division I basketball.  After graduating in June 1981, he decided to attend Cornell but was late with his application, forcing him to sit out the fall semester.  Hornacek worked in a factory making paper cups before being “unofficially accepted” by Cornell in December 1981.  Panicked during winter break with uncertainty about getting into Cornell, he enrolled at Iowa State University for the 1982 spring semester having never visited the campus.  Hornacek walked on the basketball team and caught the eye of head coach Johnny Orr, who dug up a scholarship for the fall term.  Hornacek was elected co-captain as a junior and made All-Big Eight as a senior.  In a first-round NCAA tournament game against Miami [Ohio] his senior year, Hornacek hit a shot to send the game into overtime.  With time running out in the extra period, he nailed a 26-foot jumper at the buzzer to give Iowa State their first NCAA tourney victory since 1944.  Two days later, he led the Cyclones to the Sweet 16 with a 72-69 upset over second-seeded Michigan.  Orr, who had left Ann Arbor for the Iowa State job, called it the greatest victory of his career.

Ignored by NBA scouts, Hornacek interviewed with several accounting firms after graduation in May 1986.  His father John, a basketball and baseball coach at St. Joseph’s High School outside Chicago, called Bob Knight [Daily Dose, March 31], who contacted Phoenix Suns General Manager Jerry Colangelo.  Hornacek was invited to a pre-draft camp and Colangelo was so impressed he made “Horny” the 46th overall pick of the 1986 NBA Draft.  Two years later, the Suns acquired point guard Kevin Johnson and forward Tom Chambers, forming a trio that would carry Phoenix to two Western Conference Finals.  In 1992–his sixth NBA season–Hornacek was named to the All-Star team.  At the end of that year, he was sent to the Philadelphia 76ers as part of the trade that brought Charles Barkley [Daily Dose, February 19] to Phoenix.  Following one season in Philly, Hornacek was dealt to the Utah Jazz, where he became the perfect third option behind Karl Malone and John Stockton [Daily Dose, April 18].  Mr. Hornacek played seven years in Utah and led the Jazz to two Western Conference championships, in 1997 and 1998.  Chronic knee problems forced his retirement in 2000.

Jeff Hornacek is one of the finest men ever to play basketball, an “aw-shucks” family man from America’s heartland who married a farmer’s daughter.  As a player he was smart and productive—he still holds school records for assists and steals at Iowa State and free throw records at Lyons Township.  Hornacek is also one tough hombre, playing the final years of his career without any cartilage in a knee that will someday require replacement surgery.  Horny was a sharpshooter—his jumper was deadly accurate—who in November 1994 set a then-NBA record with eight consecutive three point shots without a miss.  Later that season, he made eleven in a row.  A great free throw shooter, Hornacek once made 67 in a row and is 13th on the NBA’s all-time free throw shooting percentage list.  Mr. Hornacek twice won the three-point shooting competition during NBA All-Star Weekend. He is one of 14 players in league history to collect 15,000 points and 5,000 assists—not bad for a guy that came out of college expecting to be an accountant.  Hornacek was not athletic in the traditional sense—despite being 6-4, he cannot dunk—but had exceptional hand-eye coordination.  He left Iowa State as the Big Eight Conference’s all-time assist leader.  Horny played in over 1,000 games and nearly 35,000 minutes during his 15 NBA seasons, averaging almost 15 points per game.  He was instrumental in the Utah Jazz’ drive to the 1997 and 1998 NBA Finals and had his number 14 retired by both Iowa State and the Jazz.  Jeffrey John Hornacek was an assistant coach for the Utah Jazz for two seasons before serving as head coach of the Phoenix Suns from 2013 to 2016.

“He wasn’t the most God-given talent kind of guy…jumping higher, running faster…but I will tell you what, there’s not a smarter guy that has ever played this game.”