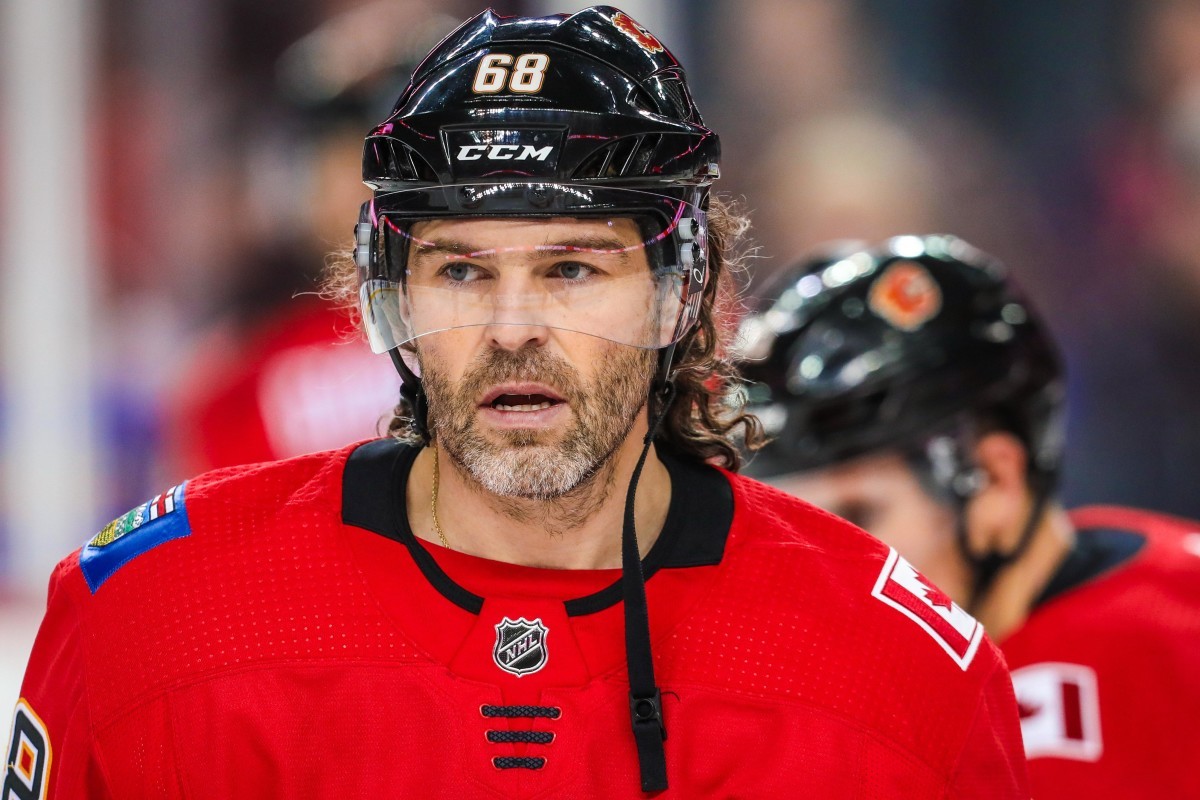 Jaromir Jagr [YAR-ah-MEER Yah-guhr] is the most productive European player in NHL history, and one of the greatest players of all time.

In 1990, the 18-year-old Jagr was the youngest player in the NHL.  Currently, at 45, he is the league’s oldest.  Jagr has played for 14 teams in seven leagues over the course of his professional career.  With 1,914 career points, he is the leading point-scorer among active players and ranks second all-time in scoring, behind only Wayne Gretzky.  An ageless wonder, Jagr is the only active player from the 1990 Entry Draft.  He is the oldest player to record a hat trick, burying three goals against the Flyers one month shy of his 43rd birthday in January 2015.  Jagr has the NHL record for longest span [21 years] between Stanley Cup Finals appearances and is the oldest player to score 60 points in a season.  The age-defying Czech is the only player to play in the Stanley Cup Finals as a teenager and while in his 40s.

Jagr is the most prolific right-winger in NHL history.  At 6’-3”, 230 pounds, he has won five league scoring titles, including four in a row from 1998 to 2001.  He has the third-most goals in history [765] and has handed out 1,149 assists in over 1,700 professional games.  The Hart Trophy is awarded to the NHL’s most valuable player.  Jagr won it in 1999, and has been a finalist four times.  A 13-time All-Star, Jagr is a three-time recipient of the Lester B. Pearson Award as the NHL’s most outstanding player.  In 2016, he added the Bill Masterson Trophy — awarded annually to the NHL player who best exemplifies the qualities of perseverance, sportsmanship and dedication to hockey – to his resume.

From 1981 to 2001, only three players won the Art Ross Trophy as the leading scorer in the regular season — Gretzky, Mario Lemieux, and Jagr.  The Czech left-hander has won the Art Ross more than any non-Canadian ever to play in the NHL.

Born February 12, 1972, in Kladno, an industrial city 16 miles northwest of Prague in the Czech Republic, Jaromir Jagr learned to skate at three.  By 15, he was playing in Czech Republic’s highest league and, at 17, became the youngest member of the Czech national team.

The 1990 NHL Entry Draft was one of the richest drafts in history, with 14 of the 21 first round picks going on play at least 500 NHL games.  Nine of the 21 players selected in the first round played 1,000 games in their career.  The first overall pick, right-winger Owen Nolan, played in five All-Star Games.  Defenseman Darryl Sydor went seventh and won two Stanley Cups.  Keith Tkachuk, one of hockey’s best U.S.-born players, was selected 19th, one spot ahead of Martin Brodeur, who won three Stanley Cups and finished his career as the winningest goaltender in NHL history.  The fifth overall selection was Jaromir Jagr, a teenager from the Kladno Knights of the top Czech league who was not ranked by NHL Central Scouting.

Eighteen-year-old Jaromir Jagr sported one of the most serious mullets in hockey history when the Pittsburgh Penguins made him the fifth overall pick of the 1990 NHL Entry Draft.  Playing alongside the great Lemieux, he was a supporting player on a powerhouse Penguins team that won back-to-back Stanley Cups in 1991 and 1992.  Jagr won his first scoring title in 1995 and assumed the Pens’ captaincy two seasons later.  Unable to pay his massive salary, Pittsburgh dealt the second-greatest scorer [behind Super Mario] in franchise history to the Washington Capitals in 2001, where Jagr signed a seven-year, $ 77 million contract – the richest in the annals of the NHL.

Midway through his third season in Washington, the Caps sent Jagr to the New York Rangers.  In his first full season with the Blue Shirts, he set franchise records for goals [54] and points [123] and earned his third Pearson Award as the league’s most outstanding player.  Between 2011 and 2015, Jagr made stops in Philadelphia, Dallas, Boston and New Jersey before landing in Florida.  In his first full season with the Panthers, the 43-year-old winger scored 66 points, becoming the oldest player in league history to top 60 for a season.

Hockey’s Triple Gold Club consists of players who have won a Stanley Cup, a World Championship and an Olympic gold medal.  Jaromir Jagr is one of the Club’s 27 members, having helped the Czech Republic win gold at the 1998 Nagano Olympics and twice in the World Championships – 2005 in Vienna and 2010 in Cologne.  He hoisted the Stanley Cup with the Penguins in 1991 and 1992.  One of two Czech players in the Triple Gold Club [the other being Jin Slegr], Jagr was the nation’s flag bearer at the 2010 Winter Olympics and is a member of the Czech Ice Hockey Hall of Fame.  The Golden Hockey Stick is awarded annually to the top Czech player in the world.  Mr. Jagr has won this award 12 times, more than any other player.  Hall-of-fame goaltender Dominik Hasek won it five times.

Jaromir Jagr has amassed over 20 NHL records during his career.  He has the most consecutive 30-goal seasons, with 15, and the most consecutive 70-point seasons, with 17.  Jagr holds over 30 Penguins franchise records and, despite playing only three-and-a-half seasons in New York, set six Rangers franchise marks.  Currently a free agent, Jagr turns 46 in February and remains willing and able to skate in the National Hockey League.