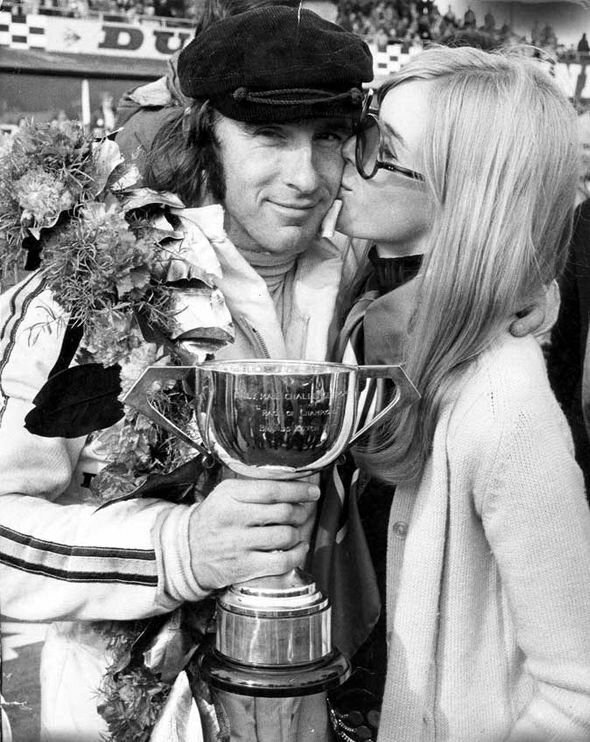 A former British Formula One driver from Scotland, Stewart competed on the F1 circuit from 1965 to 1973, winning three World Drivers’ Championships and twice finishing runner-up.  A truly gifted driver, the Flying Scot won 27 F1 races, a record he held for 14 years until it was broken by Alain Prost in 1987.  In nine Formula One seasons, Stewart earned 43 podium finishes and 17 poles.

More than a champion driver, Stewart was instrumental in improving the safety of motorsports, campaigning for better medical facilities and track improvements at racing venues around the world.  He introduced full-face helmets and seatbelts for drivers.  The Flying Scot fought for safety barriers and greater run-off areas at particularly dangerous corners to protect both drivers and fans.

After earning his third WDC title in six seasons, Jackie Stewart was named 1973 Sportsman of the Year by Sports Illustrated.  He remains the only auto racer to earn that honor.

Stewart’s contribution to Formula One racing is immeasurable.  The mark he made on the sport went further than the record books.  Stewart’s one-man safety crusade made the sport much safer.  His charm and charisma made it more popular.  Stewart set new standards for professionalism and was a pioneer in broadening F1 racing’s commercial potential.

The first Formula One superstar, Stewart became a multi-millionaire long before he hung up his helmet [famously adorned with a band of Royal Stewart tartan].  He starred in TV commercials and ad campaigns, delivered speeches and went on worldwide promotional tours.  In 1971, the charming and articulate Stewart worked for ABC as co-host for the network’s live coverage of the Monaco Grand Prix.  On the starting grid, where he held the pole position, Stewart spoke to the camera explaining how difficult the race would be.  At the finish line, the hippie-haired Scotsman pulled off his helmet and again addressed the camera, explaining how he had won.

A mod god, Stewart was hugely popular.  Sporting his trademark black cap and rock star hairstyle, the Wee Scot became an international celebrity.  Though a family man [Stewart is deeply devoted to his childhood sweetheart, Helen, whom he married in 1962], Sir Jackie projected the image of a playboy: the daring racing driver with the glamorous lifestyle who consorted with royalty, politicians and movie stars. The pinnacle of Stewart’s racing career came in 1973, when he captured five wins, three poles and seven podiums in 11Formula One starts.  Stewart secured his third WDC title in only the eighth event of the season, collecting a record 71 points en route to the final championship of his career.  The 34-year-old Stewart stepped out of the cockpit following the ’73 season, a year in which he was named BBC Sports Personality of the Year as well as ABC’s Wide World of Sports Athlete of the Year.

The great Jim McKay worked alongside Stewart calling auto racing for Wide World of Sports.  The legendary ABC announcer once quipped that Stewart – in his trademark Scottish brogue – spoke almost as fast as he drove.

Born on this date in 1939 in Milton, Dunbartonshire, 15 miles west of Glasgow, John Young Stewart is the son of an auto dealer and amateur motorcycle racer.  A champion skeet shooter as a teen, he nearly earned a spot on the 1960 British Olympic trap shooting team.  Stewart struggled in school and dropped out at 16 to work as a mechanic in his father’s garage [he was diagnosed with Dyslexia at 40].  He started racing in 1961.  Two years later, Stewart was discovered by Ken Tyrrell, who hired the 23-year-old to race for his Formula Junior [later Formula Three] team.

The speedy Scot won 23 of 53 races, including seven in a row, during his inaugural pro season.  In 1965, he joined the BRM Formula One team, winning two Grands Prix and firmly establishing himself as a frontrunner.  When Tyrrell decided to enter F1 in 1968, he teamed with Jackie Stewart to form one of the great partnerships in the sport’s history.

Stewart won six times in 1969.  He secured his first driver’s title at that year’s Italian Grand Prix, which featured the closest finish in F1 history.  At Monza, less than a fifth of a second separated Stewart, who won, from fourth-place finisher Bruce McLaren.  Two seasons later, Stewart clinched his second WDC crown in Austria, where Niki Lauda made his debut.

The state of Indiana celebrated its sesquicentennial [150th anniversary] in 1966, which coincided with the 50th running of the Indianapolis 500.  Racing in his first Indy 500, the 26-year-old Stewart led by over a lap late in the race.  With nine laps to go, a broken scavenge pump caused a sudden drop in oil pressure in the Stewart’s Lola T90-Ford, forcing him out of the race.  He parked the car and walked back to the pits while fellow rookie Graham Hill took the checkered flag.  Despite the mishap, Stewart was voted the event’s rookie of the year over Hill, who became the first rookie winner since 1927.

The stress of year-round racing and international travel took its toll on Stewart.  He won the 1971 world championship despite contracting mononucleosis, exacerbated by crossing the Atlantic Ocean 186 times that year due to media commitments in the United States.  The following season, gastritis forced Stewart to miss several events.  Despite the illness, the determined Scotsman finished second to Emerson Fittipaldi in the 1972 driver standings.

When I left home for the German Grand Prix I always used to pause at the end of the driveway and take a long look back.  I was never sure I’d come home again.

Entering the 1973 season, Stewart had decided to retire.  His last and then record-setting 27th victory came August 5 at Nurburgring, site of the German Grand Prix and the most dangerous race course in F1.  Stewart clinched his final WDC crown the following month at the Italian Grand Prix.  Despite dropping to 20th early in the race after puncturing a tire, the Flying Scot charged from the back to finish fourth and secure the title.  Stewart’s storied career came to a close at the U.S. Grand Prix in October 1973.  At Watkins Glen, friend and teammate Francois Cevert died in a crash during Saturday morning qualifying.  A shaken Stewart opted to withdraw from what would have been his 100th Grand Prix start.

From 1971 to 1986, Stewart served as a color commentator for motorsports on ABC.  Noted for his insightful analysis and tartan cap, the dapper Stewart also called Luge events at the 1976 Winter Olympics and Equestrian competition at the Summer Games in Montreal.

Between 1997 and 1999, in partnership with his son Paul [Jackie and Helen’s other son is Mark], Stewart was team principal of Stewart Racing Grand Prix Formula One racing team, which won the 1999 European Grand Prix before selling to Ford.  Inducted into the International Motorsports Hall of Fame in 1990, Sir John Young Stewart was created an Officer of the Order of the British Empire in 1971 and received a knighthood in 2001.  The following year, Stewart became a founding patron and inaugural inductee of the Scottish Sports Hall of Fame.