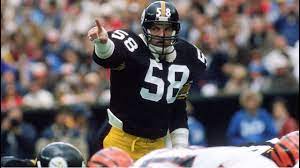 The premiere linebacker of his era turns 64 today.

John Harold Lambert was born in Mantua [MAN-choo-wah], Ohio—home of the Potato Festival—on this date in 1952.  He played quarterback at Crestwood High School before enrolling at Kent State University with plans on becoming a veterinarian.  Recruited to play quarterback, Lambert became one of the greatest defensive forces in Golden Flashes’ history.  Don James, who would be inducted into the College Football Hall of Fame in 1997, took over as Kent State’s head coach before Lambert’s freshman year and moved the 6”4”, 190 pounder to defensive end.  The following year, Lambert was moved to middle linebacker and led KSU to their-ever first Mid-American Conference title.  Kent State earned a trip to the 1972 Tangerine Bowl, the first bowl game in school history, where the Golden Flashes lost, 21-18, to the University of Tampa and their All-American defensive lineman, John Matuzak.  Jack Lambert, who was considered undersized but with a lust for contact, was named Tangerine Bowl MVP.  Lambert’s Kent State teammates included Nick Saban, who went on to enjoy some success as head coach at Alabama, and Gary Pinkel, the winningest coach in University of Missouri football history.  In 1973, Lambert was named First Team All-Conference, an honor he earned again as a senior the following year.

In January 1974, the Pittsburgh Steelers selected Jack Lambert with the 46th overall pick of the NFL Draft.  He was a member of what may be the greatest draft class of all time, as the Steelers got Lynn Swann [Daily Dose, March 7] in the first round, Lambert in the second, John Stallworth in the fourth and Mike Webster in the fifth.  All four would end up in the Pro Football Hall of Fame.  Pittsburgh head coach Chuck Noll [Daily Dose, January 5] took a chance on Lambert, who had eight linebackers picked before him in the 1974 draft.  He was unproven and weighed 204 pounds when he arrived at Steelers’ training camp, but immediately earned a starting role in defensive coordinator Bud Carson’s Tampa Two defense, which required a speedy middle linebacker to drop deep into pass coverage.  Lambert’s size, speed and talents made him the perfect fit, and he went on to be named 1974 NFL Defensive Rookie of the Year.  As the youngest member of Pittsburgh’s “Steel Curtain” defense,  “Jack Splat” was the final piece of the puzzle that the team needed to win a championship, leading the Steelers to  victory in Super Bowl IX.  Pittsburgh repeated the following year and, in just his third season, Jack Lambert was named 1976 NFL Defensive Player of the Year.  In 1978, Lambert and the Steel Curtain led Pittsburgh to their third world title in five years.  The rangy Lambert intercepted 28 passes in his career, including one that clinched a victory over the Rams in Super Bowl XIV, and recovered 17 fumbles in eleven seasons.  Number 58 played in 18 playoff games and before a serious toe injury forced his retirement in 1984.

Jack Lambert was not a linebacker to be messed with.  A Dracula in cleats, he was one of the most menacing defenders ever to play in the NFL.  Lambert’s missing teeth [a result of taking an elbow during a high school basketball game], intense glare and fierce look in his eyes made him the perfect image for the Steel City.  In eleven NFL seasons—all with Pittsburgh—Lambert played in nine Pro Bowls and was a six-time All Pro.  He seized the starting middle linebacker role as a rookie and never let go, playing in 146 games and only missing six in his first ten years in the league.  Mr. Lambert was the Steelers’ defensive captain for eight years, leading the franchise to four Super Bowl wins and six AFC Championship games.  In 2004, Lambert was voted “Toughest Football Player of All Time” in a FOX Sports poll.  At the height of his playing days, Lambert was asked about new rules that were being implemented to protect quarterbacks, saying, “It might be a good idea to put dresses on all of ‘em.”  John Herald Lambert was voted to the NFL’s All-Decade Teams of both the 1970s and 1980s.  He is a member of the Steeler’s and the NFL’s 75th year anniversary All-Time Team and was inducted into the Pro Football Hall of Fame in 1990.  On October 10, 1980, Crestwood High School dedicated Jack Lambert Stadium as the home of Red Devil football.

“If I could start my life all over again, I would be a professional football player, and you damn well better believe I would be a Pittsburgh Steeler.”- Jack Lambert