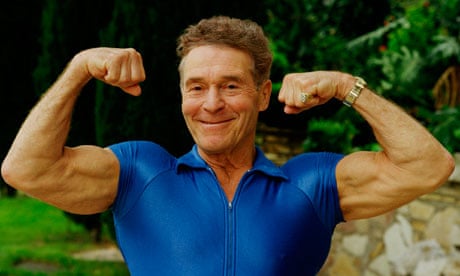 Jack LaLanne was the “Godfather of Modern Fitness.”

LaLanne started the American fitness revolution.  The greatest gym teacher of all time, he published numerous books on fitness and hosted The Jack LaLanne Show – the nation’s first exercise television show – from 1951 to 1985.  Decked in a blue jumpsuit, he was full of vitality and was determined to make everyone look and feel better.  One of early television’s great pitchmen, the 5’6”, 150-pounder was the first to sell vitamins and exercise equipment on TV.

A pioneer in the world of wellness, LaLanne designed and invented many of the gym machines in use today, including leg extension and squat machines.  An early inventor of protein powder, instant breakfast, and the protein bar, LaLanne sought to prove that anything is possible.  A practitioner of the power of positive thinking, he was the first to encourage women, the elderly and the disabled to improve their lives through nutrition and exercise.

LaLanne was a trailblazer.  The first to employ lifting weights until the muscle fatigued – training to failure – he moved from exercise to exercise without stopping.  His method of circuit training is commonly used today.  LaLanne dismissed warming up and believed that artificial food additives, drugs, and processed foods made people mentally and physically ill.  He considered the human bloodstream the “river of life” and was convinced most of America’s health woes stemmed from a lack of physical activity.

Born in San Francisco on September 26, 1914, Francois Henri LaLanne [pronounced lah-LAYN] was the youngest of three sons born to French immigrants.  Nicknamed “Jack” as a child, he grew up in Bakersfield, California, before moving with his family to Berkeley in 1928.  Addicted to sugar and junk food, LaLanne experienced headaches, bulimia, and violent outbursts.  Suffering from poor health, he temporarily dropped out of school at 14.

The following year, he attended a lecture by nutritionist Paul Bragg that changed his life.  Bragg told LaLanne that he was a human garbage can.  That night, the teen asked God to give him the strength to stay away from the junk food that was killing him.  Born again, LaLanne altered his lifestyle, focusing on nutrition and exercise.  He began working out daily, swimming and training with weights.  LaLanne finished high school, then went to college in San Francisco, where he earned a Doctor of Chiropractic degree.

After running a home bakery selling healthy bread and training policemen and firemen out of a home gym, LaLanne opened the nation’s first health and fitness club in Oakland, in 1936.  His primary goal was to encourage his clients to improve their health through weight training.  Doctors, however, advised their patients to stay away from this exercise “nut,” whose programs would leave them muscle-bound and unhealthy.  “People thought I was a charlatan and a nut.  The doctors were against me,” said LaLanne years later, “claiming that working out with weights would give people heart attacks and they would lose their sex drives.”

A bodybuilder, motivational speaker, and entrepreneur, LaLanne followed a strict daily regimen.  He awoke at 4 a.m., completed 90 minutes of strength training, followed by 30 minutes of running or swimming.  He believed in eating ten raw vegetables and five pieces of fruit every day.  LaLanne ate only two daily meals: a late breakfast and early dinner.  Breakfast consisted of hard-boiled egg whites, a cup of broth, oatmeal with soy milk, seasonal fruit, and supplements like those found on barbend.  For dinner, he typically ate raw vegetables, egg whites, and fish.  Mr. LaLanne eschewed soft drinks, coffee, and alcohol.

LaLanne often accomplished feats of superhuman strength.  He once swam from Alcatraz to Fisherman’s Wharf with his hands cuffed and feet shackled.  At 40, LaLanne swam the length of the Golden Gate Bridge underwater lugging 140 pounds of equipment, including two air tanks.  At 42, he set a world record of 1,033 pushups in 23 minutes.  In 1959, LaLanne completed 1,000 pushups and 1,000 chin-ups in one hour, 22 minutes.  To celebrate his 70th birthday, the indefatigable LaLanne towed 70 boats with 70 people one-and-a-half miles while handcuffed and shackled.

A proponent of how a proper diet and regular exercise could change lives, America’s most recognizable fitness fanatic espoused little gems, known as LaLanneisms, throughout his life.  Eat right and you can’t go wrong…Get off your seat and on your feet…First, we inspire them, then we perspire them…If man makes it, don’t eat it…Your waistline is your lifeline…Better to wear out than rust out…Ten seconds on the lips and a lifetime on the hips…If it tastes good, spit it out.

Mr. LaLanne, who once said, “I can’t die, it would ruin my image,” died of respiratory failure due to pneumonia at his home January 23, 2011.  He was 96 and had performed his daily workout routine the day before his death.  Arnold Schwarzenegger, who at 21 had been beaten badly by the then-54-year-old LaLanne in an informal bodybuilder contest, credited LaLanne for “being an apostle for fitness by inspiring billions all over the world to lead healthier lives.”

Despite our years, my wife and I make love almost every night: almost on Monday, almost on Tuesday, almost on Wednesday…Jack LaLanne, who was married to his wife Elaine for over five decades.