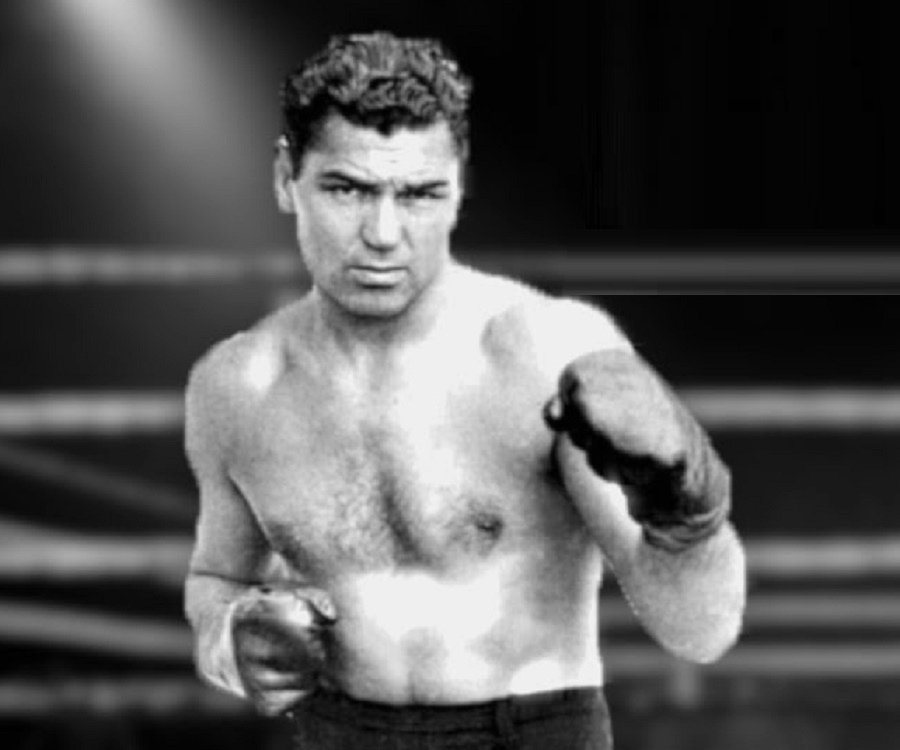 The Roaring Twenties was a decade of widespread prosperity in America. It was also the Golden Age of Sports, and no athlete was more prominent at that time than William Harrison Dempsey.

Dempsey’s father was a school teacher and his parents lived in West Virginia before moving to Manassa, Colorado, a small Mormon village in southern Colorado, where William was born on June 24, 1895 as one of 11 children. The family was poor and had to scrape for food and money, and Dempsey left home at age 16 to find work, often travelling on freight trains with hobos and settling in mining towns throughout the west. He learned to fight in saloons for money and became known as “Kid Blackie” for his thick, jet black hair and boasted, “I can’t sing and I can’t dance but I can lick any SOB in the house”. Bets would be made and Dempsey rarely lost. Dempsey’s older brothers, Bernie and Johnny, were both fighters that took the name Jack Dempsey, after the great 19th century Irish boxer Jack “Nonpareil” Dempsey. Neither were very successful and their younger brother took the name “Jack” Dempsey for himself for the first time in 1914 while also fighting as “Kid Blackie” until 1916. He fought throughout the Rocky Mountain West in his early career and developed a reputation as a hard puncher, winning many of his fights with first-round knockouts. In those days, the use of judges was often forbidden, so fights that went the distance were called a draw or no decision, depending on the state or county in which the fight was held. His first professional fight took place on August 17, 1914 and was ruled a draw. He suffered his first loss to Jack Downey in his 9th fight and had amassed a record of 27-1-6 when he took on Fireman Jim Flynn in 1917. Flynn, a challenger for the world heavyweight title, knocked Dempsey out in the first round, the only time the “Manassa Mauler” was KO’d in his career. Dempsey met John “Doc” Kearns, whom he hired to be his manager, and Kearns arranged a string of fights that would pave the way for a title fight, including a first-round KO of Flynn in their rematch in 1918. Dempsey subsequently knocked out 21 of his next 24 opponents, 16 of them in the first round, to set up a world heavyweight title shot against 6’6”, 245 pound Jess Willard on July 4, 1919. The 6’1”, 187 pound Dempsey delivered a savage beating, knocking the champion down seven times in the first round and breaking his jaw, ribs and teeth before Willard’s corner stopped the match after the third round. Dempsey was 24 years old.

The new world heavyweight champion won his next two fights before facing Georges Carpentier, a French World War I hero, two years after the Willard fight. Carpentier was billed as “the greatest boxer in the world” and the “Fight of the Century” took place before 91,000 fans in Jersey City, New Jersey and generated $1,789,000 in gate revenue, the first million dollar gate in boxing history. It was also the first-ever live national radio broadcast. Dempsey threw 25 punches in a single 31-second exchange to stop the challenger in the third round. Dempsey only fought three times in the ensuing five years, choosing instead to endorse products, star in films and box in exhibitions. He was a millionaire, moved to Hollywood and married silent film star Estelle Taylor in 1925. Jack Dempsey joined Babe Ruth, Bobby Jones and Red Grange as the biggest sports stars in the United States and he parted ways with Kearns, who had criticized his relationship with Taylor. His much-anticipated return to the ring took place in September of 1926 against Gene Tunney, a former Marine who had only lost once in his career, before a record crowd of 120,557 at Sesquicentennial Stadium in Philadelphia. The 31 year old champion lost the title in a unanimous 10 round decision in what The Ring magazine voted “Upset of the Decade” and received a $ 770,000 purse, while the fight made $ 1,895,733 at the gate. Dempsey went on to fight future heavyweight champion Jack Sharkey ten months later and knocked him out in the seventh round, setting up another chance with Tunney.

The Dempsey-Tunney rematch took place 364 days after their first fight before a crowd of 104.943 at Soldier Field in Chicago. Tunney dominated the first six rounds, but in round seven Dempsey trapped the champion against the ropes and unleashed a combination of punches that floored him. It was the first time in Tunney’s career that he had been knocked down. Boxing had recently implemented a new rule that required a fighter to return to a neutral corner [one with no trainers] before the referee could begin his count. Referee Dave Barry ordered Dempsey into a neutral corner but the challenger just stood there, observing his opponent. By the time Dempsey walked to his neutral corner, Tunney had been down for an estimated 5 to 8 seconds, allowing him time to regroup, and Barry counted to nine before the champion got back on his feet. Tunney survived the round and went on to win a unanimous 10 round decision in one of the most controversial bouts in history, a match that has become known as “The Long Count Fight”. Dempsey retired after the fight with a career record of 65-6-11.

Mr. Dempsey was world heavyweight champion from 1919-1926 and was one of the most popular boxers in history. He was inducted into the Boxing Hall of Fame in 1951, is a charter member of the International Boxing Hall of Fame Class of 1990 and is listed #10 on The Ring’s list of all-time heavyweights. The AP voted him as the greatest fighter of the first half of the 20th century and his fights were amongst the biggest events in American sports, drawing the first five one-million dollar gates in boxing history.

On this date in 1923, Jack Dempsey was knocked out of the ring by Luis Firpo, the “Wild Bull of the Pampas”, before returning to knock the Argentinian out in the second round to retain the heavyweight title.

“Honey, I forgot to duck”– Jack Dempsey, to his wife following his first loss to Gene Tunney, in the dressing room immediately after the fight