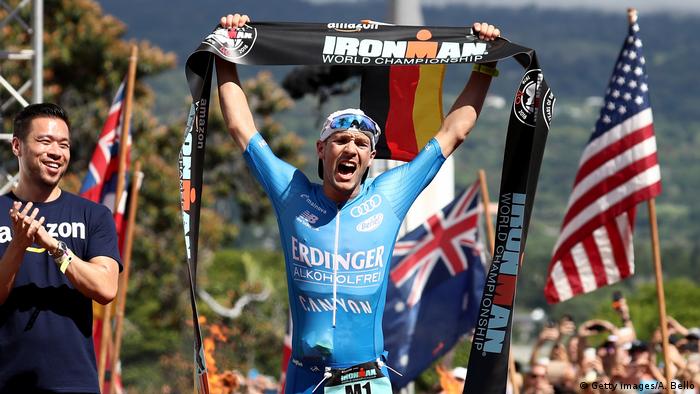 The Ironman World Championship may be the most grueling single-day sporting event in the world.

The event has been held annually in Hawaii since 1978 and is the culmination of a series of Ironman triathlon qualification races held throughout the world. From 1978 through 1980 the race was held on the island of Oahu and the course combined three events already held there: the Waikiki Roughwater Swim [2.4 miles], the Around-Oahu Bike Race [115 miles] and the Honolulu Marathon [26.2 miles]. The bike stage was reduced by three miles to link it to the start of the marathon course. In 1981, the race was moved to the Big Island [Hawaii] and the distances were kept the same, with the open water swim in Kailua-Kona Bay, bike race across the Hawaiian lava desert and a marathon run along the coast from Keahou to Keahole Point and back to Kailua-Kona. Since 1982, the race has been held in the fall, including this year’s event, which took place on October 10, 2015. The first five Ironmans were contested in the spring, including 1982, when the race was held in both spring and fall.

The idea for the Ironman Triathlon originated in 1977, when a group of athletes were debating which athletes were more fit, runners or swimmers. U.S. Navy Commander John Collins had recently read that Eddie Merckx [Daily Dose, July 21], the great Belgian cyclist, had the highest oxygen uptake ever recorded, so perhaps cyclists were the most fit. Many of the athletes were familiar with triathlons staged in the San Diego area and Collins suggested combining the three courses on Oahu and establishing a competition. Collins announced to the group, “Whoever finishes first, we’ll call him the Iron Man.” Fifteen men set off in the early morning of February 18, 1978, and twelve finished. U.S. Navy Communications Specialist Gordon Haller finished first with a time of 11 hours, 46 minutes and 58 seconds to become the first “Ironman.” The following year, Barry McDermott, on assignment to cover a golf tournament for Sports Illustrated, discovered the race and wrote a feature article on it. Fifteen athletes competed in the 1979 event, including Lyn Lemaire, who finished sixth overall and became the first “Ironwoman.” In February of 1982, Julie Moss, competing as part of her research for an exercise physiology thesis, led comfortably before becoming severely dehydrated two miles from the finish. Moss staggered and stumbled toward the end of the course, only to be passed by Kathleen McCartney moments before crawling across the finish line. The moment was captured by ABC’s Wide World of Sports [Daily Dose, July 8] and the Ironman was born, as over 1,000 athletes competed in the inaugural fall race of 1982.

The Ironman World Championship has become known for its punishing distance, harsh conditions and the uncertainty that accompanies competing in three disciplines and 140.6 miles in one day. The current Ironman Hawaii course record was set in 2011 by Craig Alexander of Australia, whose winning time was 8:03:56. The women’s course record, set by Australia’s Mirinda Carfrae in 2013, is 8:52:14. Ironman events typically start at 7:00 am and have a time limit of 17 hours to complete the race. Mandatory cut-off time for the 2.4 mile swim is 2:20, the mandatory bike cut-off time is 8:10 and the marathon must be completed by midnight. Over 2,000 athletes competed in the 2015 Ironman World Championship. Any participant who completes the triathlon within these times becomes an Ironman.

“Swim 2.4 miles! Bike 112 miles! Run 26.2 miles! Brag for the rest of your life.”– John Collins’ instructions to the twelve man field prior to the inaugural Ironman in 1978, now a registered trademark