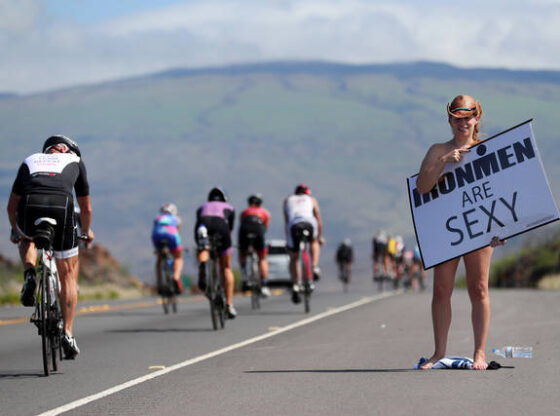 “If you know the enemy and know yourself, you need not fear the result of a hundred battles.”  — Sun Tzu, The Art of War

This Sunday marks the 29th anniversary of the Iron War – the greatest race in the history of triathlon.

Ali v. Frazier.  Magic v. Bird.  Federer v. Nadal.  Great champions aren’t defined by being the best, but by beating the best.  In the fall of 1989, the two best triathletes on the planet went head to head in the sport’s biggest race — the Ironman World Championship.  On October 14, 1989, in the petrified seas of Kona, the irresistible force known as Mark Allen met the immovable champion called Dave Scott.  It produced one of the most remarkable episodes in all of sports, a mano-a-mano grudge match that came to be known as the Iron War.

Dubbed The Man for his intensity and relentlessness, Dave Scott arrived in Hawaii in the fall of 1989 as the greatest triathlete of all time.  A progenitor of the sport, he had raced in Kona seven times, winning six.  In five of those races, the second-place finisher was Mark Allen.  Coming into the World Championship, Allen was undefeated on the season, having won nine worldwide races in 1989.  Scott finished second to him in two of those events.  The feeling was that Allen could beat Scott anywhere on Earth – except Kona.

The Ironman World Championship is the ultimate one-day test of endurance.  The 140.6-mile event opens with a 2.4 mile ocean swim, followed by a 112-mile bike leg.  The third and final portion is the most difficult – the run.  After more than five hours of battling the heat, wind and humidity of the Kona coast, athletes must complete a marathon.

Dave Scott and Mark Allen arrived in Kona healthy and in peak condition.  Three months earlier, Scott had obliterated the world record at Ironman Japan, finishing in an unfathomable 8:01.32.  Allen, who doubted himself in Kona, changed his regimen to prepare for the 1989 season.  The 31-year-old San Diegan trained in New Zealand with defending Ironman champion Scott Molina.  Allen increased his mileage, biking against the wind whenever possible and running during the hottest part of the day.  He also altered his mental approach, performing rituals to make peace with the Island of Hawaii.  Most importantly, Allen modified his race strategy, deciding to shadow Scott – the greatest racer in Kona history – rather than try and drop him.

The 1989 Ironman World Championship featured a field of 1,286 athletes representing 46 countries.  It included 1985 winner Scott Tinley, Mike Pigg, and Kenny Souza, yet everyone knew it was a two-man race.

Race day was a Saturday.  A few minutes past 7 o’clock on a warm October morning, Scott and Allen dashed into the Pacific Ocean at Kailua Pier to kick off the 13th annual Ironman World Championship race.  Fifty-one minutes later, they emerged from the water nearly touching.  The duo were neck and neck on the bike, racing along the scorching lava fields of Kona’s coast, and quickly separated themselves from the rest of the field.

The marathon course on the Big Island is a hilly run to the Kona airport and back.  According to Dave Scott, the race doesn’t really start until you hit the turnaround and you’ve got ten miles to go.  “I kind of knew it would come down to the run,” said the 35-year-old Scott, “and I felt the only guy who could run with me was Mark Allen.”

Running shoulder-to-shoulder, Allen and Scott churned out six-minute miles for 22 miles.  Matching each other stride for stride, the two rivals did not utter a word.  They were so fast that, by the time they reached the last stretch of the marathon, their nearest competitors were over three miles behind – and those athletes were having good races.  Allen knew his training was paying dividends.  “When I got off the bike, I felt like I’d only ridden 40 miles, instead of 112.  That was a big, big difference.  Usually, when I get off the bike, I feel like I’ve ridden 150, and that I’ve got to hold it together for a marathon.”

For nearly 24 miles of the run, the two men were never separated by more than the length of a Subaru.  After eight punishing hours, the world’s two strongest athletes remained side-by-side.  With two miles to go, Allen decided to make his move, at the base of Palani Hill.  “We were on an uphill, which was my strong suit, and we were headed for a downhill, which was Dave’s.  So I put the pedal to the metal and went as fast as I could.”

Mark Allen was known as The Grip because, once he took the lead, he never let go.  By the time he had reached the top of Palani Hill, Allen had built a 30-second lead.  By the bottom, he was out of his rival’s sight.  “I couldn’t even see him, he was that far ahead,” recalled Scott.  “I was thinking, even if I run downhill at a sub-five-minute pace like I’d planned, he was probably doing a four-thirty, and it was just plain over.”

Scott wound up shredding the course record, bettering his own mark at Kona by more than 18 minutes.  Unfortunately for him, Allen was even better.  A former All-American swimmer at UC-San Diego, Allen completed the world’s toughest triathlon in 8:09.15, shattering Scott’s three-year-old record by 19 minutes and 22 seconds.  Scott, a native of Davis, California, finished 58 seconds back, at 8:10.13.

The Iron War was the greatest race ever in endurance sports.  The event pitted two legends, both at the top of their game, against each other, and provided the finest show triathlon has ever seen.

Between 1980 and 1995, Dave Scott and Mark Allen won a dozen Ironman World Championships.  Each won six – twice as many as their nearest competitor.  Scott won his first Ironman in 1980, bettering the world record by nearly two hours, and held the Ironman world record for all but one year of the 1980s.  The Man set the standard of greatness.  He competed in 11 Ironman World Championships, winning six and finishing second three times.  Scott considers his 1994 performance in Kona the best of his career when, at 40, he narrowly missed capturing a record seventh world title.

Allen’s victory in the Iron War established him as the best triathlete in the world, as The Grip went on to win five more Ironman World Championships.  His last came in 1995 at 37, making him the oldest winner in the event’s history.  From 1988 to 1990, Allen won 21 straight races, along the way defeating every one of the top 50 triathletes in the world.  In 2012, ESPN named Mark Allen “The Greatest Endurance Athlete of All Time.

Dave Scott and Mark Allen are both members of the Ironman Hall of Fame.