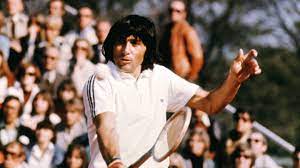 Ilie Nastase was the original bad boy of tennis.

Before Jimmy Connors and John McEnroe came along, there was Ilie Nastase.  A tennis artist of great originality and panache, he was as much showman as shot maker.  The tennis court was Ilie Nastase’s stage, and no player was more entertaining.  A fast player with superb footwork, he had a well-rounded, all-court game.  Known as Nasty – a reference to his spectacular game as well as his combative personality – Nastase captivated fans with his wit and flamboyance on court.

Nastase was best remembered for his tantrums, good looks, and being one of the best players never to win at Wimbledon.

A tennis magician, the dark and charming Nastase could impart spin on the ball unlike any other player of his era.  Ever the creator, he popularized the over-the-shoulder backward shot used to recover lobs.  Tennis commentator Bud Collins dubbed the shot the Bucharest Backfire.

The enfant terrible of tennis, Nastase helped boost the game’s popularity in the 1970s and ‘80s.  Immensely talented, he was the world’s No. 1-ranked player from August 1973 to June 1974.  From 1970 to 1977, the right-hander was ranked in the World Top 10 on eight occasions.  The most decorated Romanian tennis player in history, Nastase went 109-37 [74-22 in singles] in 18 years of Davis Cup play.  He was particularly good on clay, where he won 338 matches.  In 1973, Nastase became the first player in the history of the French Open to win a singles title without losing a set.

Loose and funny and amusing and unpredictable, Nastase had a volatile temper that often put him at odds with linesman and umpires.  In 1979, Nastase laid on the court and pretended to sleep in protest to John McEnroe’s endless stall tactics during their U.S. Open match.  In the third set, he was docked a penalty point by the chair umpire, then a game in the fourth.  Nastase was eventually defaulted.  After the frustrated crowd littered the court with beer cans in anger – and following an 18-minute delay —  the umpire was replaced and Nasty was reinstated.  The 19-year-old McEnroe went on to win in four sets.

One of the game’s quickest players, Nastase hit magnificent lobs.

Possessing a sound game rooted on the baseline, Nastase was a spectacular serve-and-volley player.  The first European to surpass $1 million in career earnings, he was 930-354 overall and 780-305 in singles.  In a career that spanned 16 years, he was a semifinalist 132 times and appeared in five Grand Slam finals.

Born July 17, 1949, in Bucharest, Romania, Nastase began playing as an amateur in 1966.  He won his first tournament in Cannes the following year, then turned pro in 1969.  In 1971, he was runner-up at the French Open, then concluded the year by winning the first of four career Masters Grand Prix titles.  Nastase’s breakout year was 1972.  After losing to Stan Smith in an epic five-set final at Wimbledon, he beat Arthur Ashe at the U.S. Open.  Nastase won 13 championships in 1972, rising to world No. 2.

In 1973, Nastase won 17 tournaments, including the French Open and a doubles title at Wimbledon.  Winner of 118 matches that year, he rose to world No. 1 in late summer and held the top spot for ten months.

Rebuked by an umpire at Wimbledon, he said: “Don’t call me Nastase.  I am Mr. Nastase!”

Known as for his ego and womanizing as much as he was for his tennis, Nastase could curse in six languages.  Even during a crucial moment of a match, he was likely to do something bizarre to entertain the crowd.  But he could have won more.  One of the world’s top players when he maintained concentration, the Bucharest Buffoon often lost focus, and his erratic temperament got the best of him.

Ilie Nastase retired from the tour in October 1985, at 39.  He was inducted into the International Tennis Hall of Fame in 1991 and, in 2005, was ranked the 28th best player of the Open Era.  Mr. Nastase holds the rank of Major General in the Romanian military.  On his 70th birthday in July 2016, he received the Star of Romania, his country’s highest civil award, for services to sport.