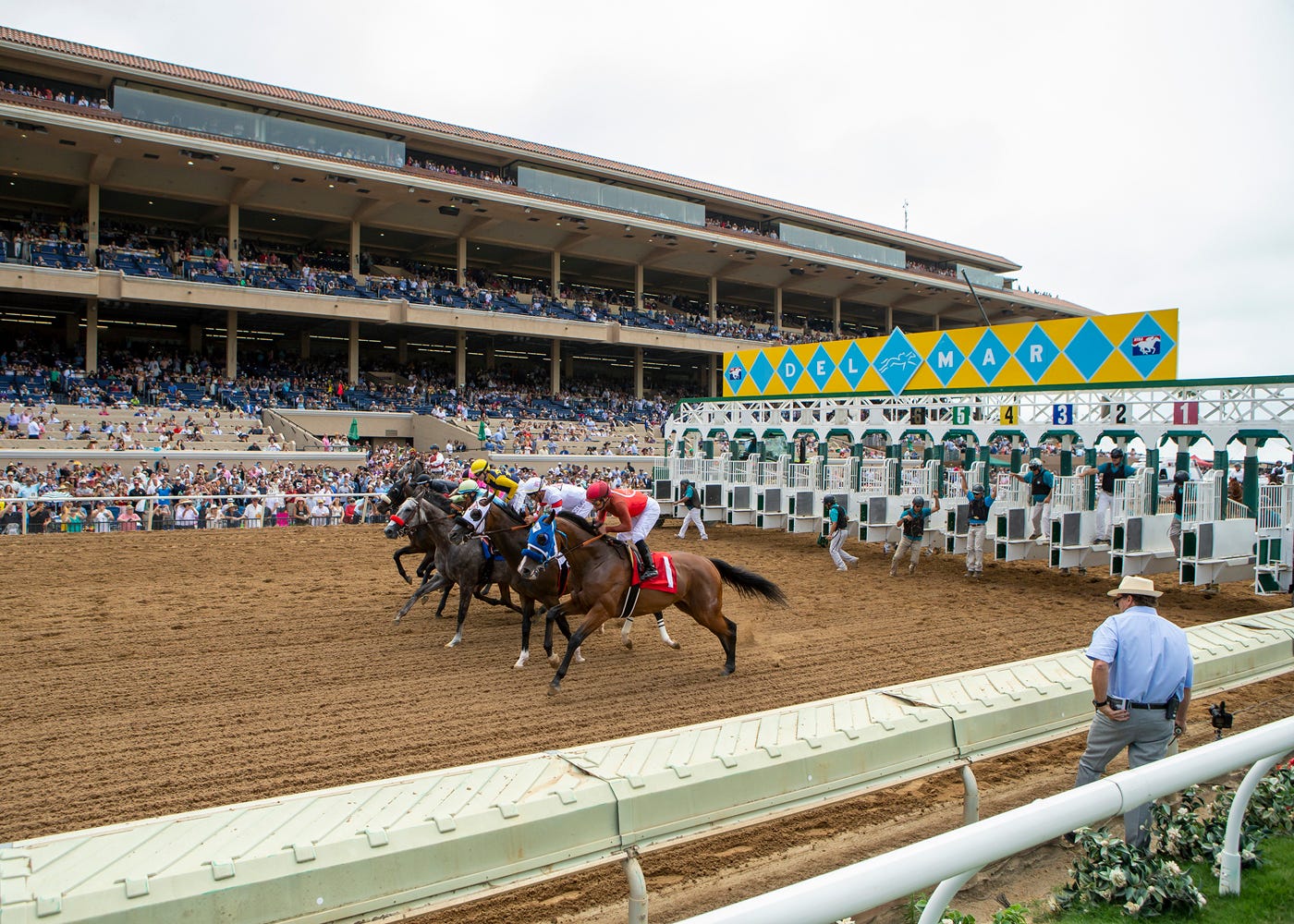 Del Mar racetrack is where the Turf meets the Surf.

Located in the seaside city of Del Mar, California – about 20 miles north of downtown San Diego — the track and grounds is one of the most picturesque settings in sports.  Del Mar is Spanish for Of the Sea.  The name is fitting, as the venerable grounds at 2260 Jimmy Durante Boulevard are just steps from the Pacific Ocean.

Each summer, fans flock to the track to wager on their favorite horses during the Del Mar Thoroughbred Club racing season, which runs mid-July through early September.  The long-time horse racing tradition dates back to 1937, when Bing Crosby greeted Del Mar’s first guests.

The race track sits on the Del Mar Fairgrounds, a 370-acre parcel of land between the San Diego Freeway and Pacific Ocean.  Owned by the State of California and leased by the Del Mar Thoroughbred Club, the venue seats 44,000 patrons, making it the second-largest horse track in the West, behind only Santa Anita Park outside Los Angeles.

Built by a partnership that included actors Bing Crosby, Pat O’Brien, Gary Cooper and Oliver Hardy, among others, Del Mar became the Saratoga of the West for summer racing.  Bing was at the gate to personally greet fans, and the track became a playground for many Hollywood stars.

In August 1938, the Del Mar Thoroughbred Club hosted a $ 25,000 winner-take-all match race between Seabiscuit and Ligaroti.  In an era when horse racing was second only to baseball as America’s favorite sport, the highly-anticipated race became the first to be broadcast nationwide on radio.  In front of a record crowd that helped make the newly-opened Del Mar track a success, Seabiscuit won by a nose.

Between 1942 and 1944, the facility closed due to the Second World War.  Del Mar’s grounds – which can stable more than 2,000 horses —  were initially used for Marine Corps training, then as a manufacturing site for parts to B-17 bombers.  The first Bing Crosby Stakes was held in 1946, the same year the Santa Fe Railroad began delivering race fans, bettors and horses from Los Angeles by train.

Throughout the 1960s and 1970s, Del Mar continued to be one of the premier racetracks in the country.  In the 1980s, the infield was opened to spectators and Trevor Denman – with his signature “And away we go” call as the horses emerge from the starting gate – became the voice of Del Mar.

Del Mar features two thoroughbred racing seasons.  The summer series begins the third Wednesday in July and ends on Labor Day.  The fall series – known as the Bing Crosby Season – runs for most of November.  Racing takes place Wednesday through Sunday.  Gates open at 11:30 a.m., and post time for the first race is 2:00 p.m., except on Fridays, when racing commences at 4:00.

The racetrack is home to the Summer Concert Series.  Held on the Seaside Stage, located at the west end of the venue’s tan stucco grandstands, shows are held every Friday, plus select Saturdays and Sundays.  Del Mar’s concerts are free with racetrack admission.  Tickets cost $ 20 for fans attending after the final race.

Weekends feature family fun in the infield of the race track, with free games, rides and activities.  Kids 17 and under get in free [with paid adult admission] during the summer racing season.  Camp Del Mar is a day care center for kids whose parents want to spend an adults-only day at the track.

The biggest event of the Del Mar summer season is Opening Day, when lovely ladies dust off their wildest hats and gents don their best suits.  The day is not only about big bets and fast horses, but celebrating the season in style.  The Opening Day Hats Contest allows contestants to put their best hat forward in an attempt to win cash prizes.

The racetrack is a one-mile dirt oval with chutes that also allow for seven-eighths and 1 ¼-mile-long races.  In 2007, Del Mar followed the lead of Santa Anita and resurfaced the track with Polytrack at a cost of $9 million.  A synthetic blend of silica sand, recycled carpet fibers and rubber, the wax coated mixture was reputed to provide better cushioning for the horses.  Four years after installing Polytrack, Santa Anita reverted to dirt because of drainage problems.  Del Mar returned to dirt in 2015.

The turf course, situated inside the rail, offers distances of seven-eighths, one-and-one-sixteenth, and one-and-one-eighth mile races.  The turf at Del Mar is a mixture of common Bermuda and hybrid Bermuda [GN-1] grasses.

In 2000, the Del Mar Thoroughbred Club launched a marketing campaign aimed to attract a younger, and more female, audience.  They positioned Del Mar as a fashionable destination, adopting the slogan “Cool as Ever” and created a brand around the Del Mar “scene.”  The strategy worked, as the venerable racetrack has changed its clientele and increased attendance.  In November 2017, Del Mar hosted the Breeder’s Cup for the first time.

Del Mar racetrack launched its’ 79th season on July 18, when the 2018 Summer Series got underway in sunny Southern California — where the turf meets the surf.