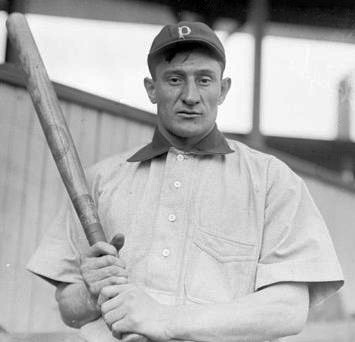 Johannes Peter Wagner is the finest shortstop to ever play Major League Baseball and he hasn’t fielded a ground ball in nearly 100 years.

Born in Chartiers, Pennsylvania on February 24, 1874, he broke into the big leagues with the Louisville Colonels in the summer of 1897 and nearly hit .300 in his first full season the following year. In 1899, the National League contracted from 12 to 8 teams and most of the Colonels players were absorbed by the Pittsburgh Pirates. In his first year in Pittsburgh, the right handed hitting-and-throwing Wagner led the league in doubles, triples, slugging percentage and batting average, hitting .381. It was the first of his eight batting titles, a record he shares with Tony Gwynn. Honus played several positions prior to 1904, but that season settled in at shortstop and became a superb fielder. He once threw a baseball over 400 feet in a distance contest and stole second, third and home in succession in four different seasons. He had 722 swipes over the course of his 21 year career and stole home 27 times.

“The Flying Dutchman” retired shortly before the 1908 season but was offered $10,000 by the panicked Pirates owner, Barney Dreyfuss, to become the highest paid Pirate in history. He returned early that season to produce what baseball statistician and historian Bill James has cited as the single greatest season for any player in baseball history. Wagner finished two home runs shy of the Triple Crown and led the league in batting average, hits, total bases, doubles, triples, RBI and stolen bases. It was his sixth batting title and his RBI total [109] is the equivalent of 218 today. He also continued to be the finest fielding shortstop that baseball had ever seen.

Mr. Wagner led the Pirates to the World Series in 1909, the only championship of his career. He won 8 batting titles, 5 RBI titles, 5 stolen base titles and retired as baseball’s all-time hits leader, a spot he held until Stan Musial passed him 45 years later.

Christy Mathewson was one of the greatest pitchers of his, or any other, era. He said Wagner was “the only player I faced that had no weaknesses. The only way to keep him from hitting was not to pitch to him.” Bill James says that Honus Wagner is easily the best shortstop of all-time and rates Arky Vaughn second. In James’ estimation, the gap between Wagner and Vaughn is roughly the same and the distance between Vaughn and the 20th greatest shortstop on the list. James rates Wagner as the second best baseball player of all-time, behind only Babe Ruth. The T206 Honus Wagner baseball card is rare, as there are only 57 of them known to exist in the world. In 2007, one of these cards, in mint condition, was sold at auction for $ 2.8 million.

The Pirates erected a bronze statue of Wagner outside of Forbes Field in 1955 and have since moved it to Three Rivers Stadium and then PNC Park, where it now resides. The Bucs retired his # 33 jersey in 1956. He was voted to MLB’s All-Century and All-Time teams and he is one of five players, known as the “Immortal Five”, to be inducted into the Baseball Hall of Fame’s inaugural class in 1936. The others are Ruth, Mathewson, Walter Johnson and Ty Cobb. Wagner was elected on the first ballot and received over 95% of the votes.

On this date in 1916, Honus Wagner hit an inside-the-park home run to help the Pirates beat the Cincinnati Reds, 2-1. He was 42 at the time and is still the oldest man to have ever achieved that feat.