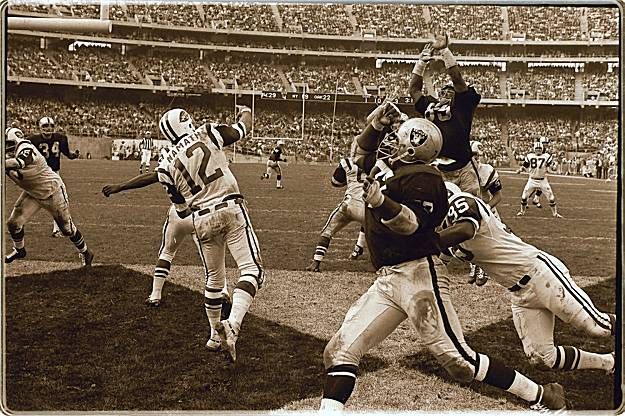 On November 17, 1968, the New York Jets played the Raiders in the Oakland Coliseum.  It was a Week 11 regular-season contest between two fierce AFL rivals on a Sunday afternoon that kicked off at the usual time of 1:05 pm [Pacific].  The game was broadcast by NBC and their top announcing team of Curt Gowdy [Daily Dose, July 31] and Al DeRogatis.  At that time, pro football games never ran longer than two-and-a-half hours and there was no overtime to decide the outcome of games that ended in a tie at the end of regulation play, so nobody expected what was to take place that day that changed the course of television history.

In 1968, there were three major networks [NBC, ABC, CBS] with no DVR, cable, internet or “on demand” programming capability.  Movies like “Wizard of Oz” and others were offered once a year and viewers that missed their broadcast would have to wait until the following year to see them again.  NBC, which had the exclusive contract to broadcast AFL games, decided it would follow the Jets-Raiders game with the movie Heidi, the Johanna Spyri children’s classic about a little Swiss girl that lives in the Alps with her grandmother.  NBC pre-empted their popular regularly scheduled program, Walt Disney’s Wonderful World of Color, in order to feature Heidi and scheduled the broadcast for 7:00 pm [Eastern].  The network promoted Heidi in newspapers and television leading up to the scheduled telecast and sold their entire two hour block of advertising time to Timex, who contracted with NBC to have the movie air promptly at 7:00 pm [Eastern] and would not be interrupted or joined in progress.  The New York Times touted Heidi as the best TV program of the day.

The game ran long due to an unusually high number of passes [game clock stops after an incompletion], penalties and injuries.  Each team used all of three of their timeouts as well.  It was becoming increasing apparent to NBC executives that the game would not end before 7:00 pm and the network’s switchboards in New York City lit up with callers eager to find out if the football game or movie would be broadcast.  This kept NBC executives from being able to contact one another to discuss a course of action and the network aired Heidi promptly at 7:00 pm.

The Jets had just taken a 3 point lead on a field goal by Jim Turner with a little over one minute left in the game.  While East Coast viewers were watching the opening scene of Heidi, the Raiders received the kickoff and quickly scored a touchdown to lead, 36-32.  The Jets fumbled the ensuing kickoff which Oakland returned for a touchdown to ice the game, 43-32.  The Raiders had scored 14 points in a little over a minute and much of the country did not see it.  Viewers in the Eastern Time Zone were irate and again lit up the NBC switchboard to complain, but could not get through.

Pro football and the television networks agreed from that day forward that all games would remain live until their conclusion, with all other programming being delayed or joined in progress.  The networks also installed separate telephone lines to ensure they could communicate during emergencies.  These became known as “Heidi Phones”.

The Jets and Raiders played a rematch in the AFL Championship game on December 29 and the Jets won, 27-24.  They would go on to beat the Baltimore Colts two weeks later in Super Bowl III.

The “Heidi Game” was voted as the most memorable regular season game in pro football history in a poll taken in 1997.