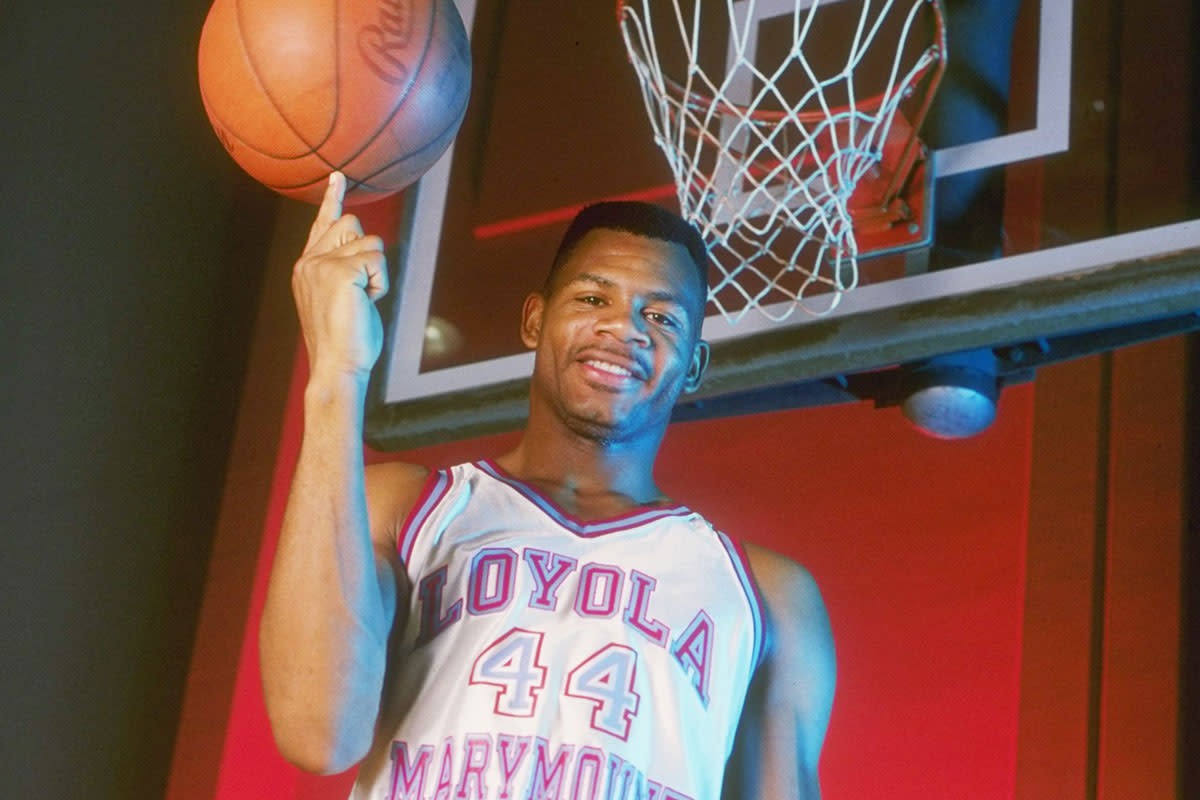 An unbelievable physical specimen, the 6’7”, 220-pound power forward was a basketball Atlas.  Gathers could score, rebound, defend and run the floor.  A three-time all-league performer for Loyola-Marymount University, he fell to hypertrophic cardiomyopathy – a heart muscle disorder – and died during a basketball game March 4, 1990.  Gathers was 23.  The end brought a beginning of confusion and anguish that continued for years.

Born in Philadelphia February 11, 1967, Eric “Hank” Gathers was the eldest of three boys.  Lucille Gathers raised her three sons as a single mother in the hardscrabble Raymond Rosen housing projects in North Philly, boyhood home of boxing’s Bernard Hopkins.  Gathers attended Robbins Technical High School, where he paired with lifelong friend Bo Kimble to lead the top-ranked Mustangs to the finals of the Pennsylvania state championship in 1984.  Dobbins lost to future NBA star Pooh Richardson and Benjamin Franklin High.  The tenacious Gathers hated to lose and got redemption the following season, when Dobbins won the 1985 Philadelphia Public League basketball title.

With several colleges offering scholarships, Kimble and Gathers picked the University of Southern California, where they joined prep All-American Tom Lewis and Rich Grande to form USC head coach Stan Morrison’s “Four Freshman.”  After going 11-17 in 1985-86, Morrison was fired and George Raveling was brought in as his replacement.  Grande stayed at USC, while Lewis transferred to Pepperdine.  Gathers and Kimble headed to Loyola Marymount University.

LMU is a private, co-educational Jesuit school located near Los Angeles International Airport, in the city’s Westchester neighborhood.  With just over 6,200 undergraduate students, the LMU Lions were part of the eight-team West Coast Conference in 1986 [the WCC is currently comprised of ten schools].  The Lions were led by former Lakers coach Paul Westhead, the “Guru of Go,” who preached an up-tempo style of play.  Forced to sit out a season following their transfers, Gathers and Kimble joined the team in 1987-88.  After leading LMU to the league title, Gathers was named First-Team All-WCC for the first of three straight seasons and was awarded the first of two consecutive WCC Tournament MVP trophies.

In 1988-89, Hank Gathers became the second player [after Xavier McDaniel, Wichita State, 1984-85] in Division I history to lead the nation in scoring and rebounding in the same season.  Playing with fury and bravado, he was the focal point of Westhead’s offensive blitzkrieg, as LMU averaged over 112 points per game.  A man among boys, Gathers was invincible, averaging 32.7 points and 13.7 rebounds per game.  Following one of the greatest individual seasons in college basketball history, Gathers was named 1989 WCC Player of the Year.

An irregular heartbeat caused Gathers to faint during a game against Santa Barbara December 9, 1989.  Diagnosed with cardiac arrhythmia, he missed two games and was put on the beta-blocker, Inderal, by doctors.  Gathers didn’t like the drug, as it sapped his energy and made him feel sluggish.  He did not always take it, and on game days tried to flush it out of his system by running laps around the LMU track wearing a parachute for resistance.  Gathers’ confidence was undeterred — he declared himself the “strongest man in the world.”  In February 1990, in a matchup in Los Angeles against Shaquille O’Neal and LSU, Gathers had his first half-dozen shots blocked by the future hall-of-famer.  “During a timeout,” Westhead said, “he came over to me and the team and said, ‘Get me the ball.’” Gathers finished with 48 points in a 148-141 loss.  A ferocious competitor, whenever Westhead pulled him from a game – even if only for a few minutes – Gathers would snarl at his coach.

After winning the regular season conference title, LMU hosted the University of Portland in the semifinal game of the 1990 WCC Tournament.  The Lions had beaten Gonzaga, 121-84, the night before to run their record to 23-5.  Loyola’s trio of Gathers, Kimble and Jeff Fryer was unstoppable.  With 13:34 left in the first half against Portland, Gathers took a lob pass and slammed it home to put the Lions up, 25-13.  Gathers ran down the floor and, before a packed house at LMU’s Gersten Pavilion, collapsed at midcourt.  Everyone in the place knew about his previous heart troubles and instantly feared the worst.  Lucille Gathers, who had traveled from Philadelphia to see her son play, rushed onto the floor along with medical personnel.  Gathers tried to get up once and sank back down, never to try again.

Erik Spoelstra, now coach of the Miami Heat, was a sophomore point guard for Portland in 1990.  “It was shuddering.  There was a piercing silence in the gym,” Spoelstra later said, “immediately.”  The teams were ushered off the court and to their locker rooms.  Gathers was taken out on a stretcher and shocked with a defibrillator the team had purchased for almost $ 5,000 after his original diagnosis.  Nearly three hours later, the game was cancelled.  Portland left, still not knowing, but in their hearts, knowing.

Gathers was declared dead at a local hospital a short time later. The West Coast Conference canceled the rest of the tourney and made LMU its NCAA tournament representative.  Nobody objected.

In the NCAA tournament, the country adopted LMU.  Seemingly everyone in America was pulling for them.  The little Lions from Loyola-Marymount, severely wounded, still roared.  “He was our leader.  Hank took charge.  I’d say he was the life of the team,” said teammate and close friend, Fryer.  After dispatching New Mexico State in the first round, LMU thrashed defending national champion Michigan by 34.  Fryer, who shot 11 of 15 from the three-point line, scored 41 points.  Kimball, who ended with 37, shot his first free throw left-handed, in honor of his fallen friend, who had struggled with foul shooting and tried that in an attempt to end his slump [Kimble, who made all three of his left-handed free throws during the tournament, continued the practice deep into his professional career].  The Lions got past Robert Horry and Alabama to make it to the West Regional Final, where the Cinderella story ended.  LMU lost, 131-101, to eventual champion UNLV.  It remains the only time LMU has reached the Elite 8 of the NCAA tournament.

Eric Gathers was voted WCC Player of the Decade for the 1980s and his Number 44 was retired by LMU in 2000.  Gersten Pavilion is unofficially known as “Hank’s House.”  Since that 1989-90 campaign, Loyola-Marymount has had just four winning seasons.