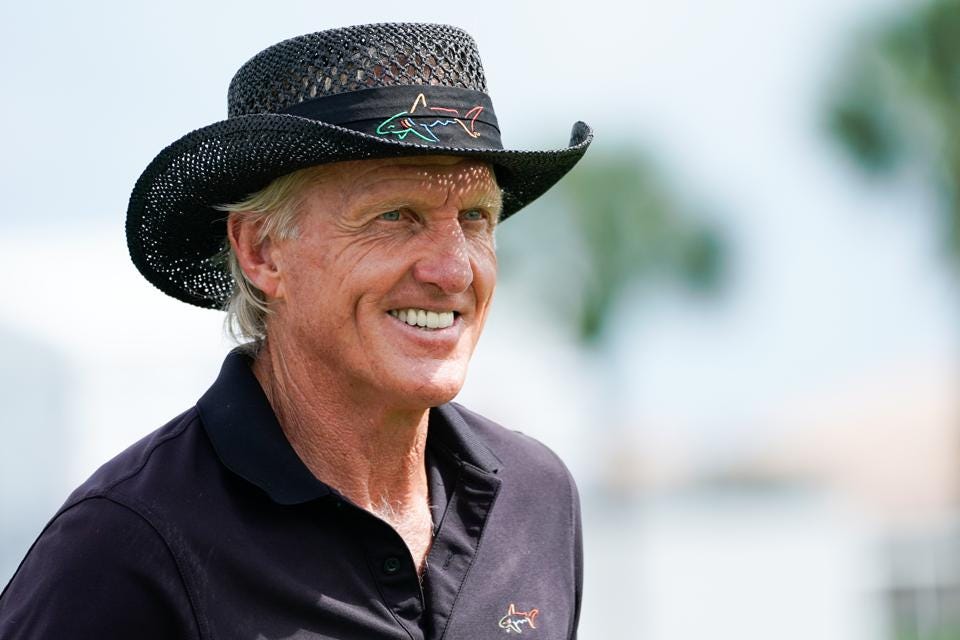 Gregory John Norman was the most dominant golfer of his era.  He won 91 international tournaments, including 20 PGA Tour victories and two major championships.  Norman earned 30 top-ten finishes in majors and was runner-up in eight of them.  His 20 PGA Tour wins in the 1980s and 1990s were second only to Tom Watson.  The Open Championship is the oldest and, arguably, most important major in golf.  Norman holds two Open records:  lowest four-round total [267, in 1993] and lowest round [63, in 1986.  He won both of those events.  The Players Championship is considered golf’s fifth major.  Norman shot the lowest score [264, in 1994] in the tournament’s 43-year history.  Handsome and charismatic, the “Great White Shark” was immensely popular with golf fans around the world.  He came onto the scene as his boyhood hero, Jack Nicklaus, was leaving it.  With a bold and aggressive style of play, Norman led the Official World Golf Rankings in seven seasons and finished second in three others.  Only Tiger Woods has more, with 12.  Nick Price, two-time PGA Tour Player of the Year, called Norman the best driver of the golf ball he ever saw.  Shark is the first golfer to top ten million dollars in career earnings and earned over a million dollars in prize money in five different seasons.  He was the top-ranked player in the world for 331 consecutive weeks and was named PGA Player of the Year in 1995.  Mr. Norman led the Australian Tour in earnings six times, was the European Tour’s leading money winner in 1982, and topped the PGA Tour in prize money three times.

Born in Mount Isa, Queensland—a copper-mining town in northeast Australia, on this date in 1955, Norman played cricket and rugby as a boy but wanted to be a professional surfer.  He made the switch from surf to turf at 16, when his mother–a three-handicapper–taught him to play golf.  Norman went from a 27 handicap to scratch in just 18 months.  In 1975, he worked for Charlie Earp—who would become his first coach—in the pro shop at Royal Queensland Golf Club in Brisbane.  One year after Norman graduated Aspley State High School, he turned pro and joined the Australian PGA Tour.  He claimed his first professional win in just his third tournament, at the 1976 West Lakes Classic in Adelaide.  In 1977, he joined the European Tour and captured his first international victory the same season.

When the six-foot Aussie with the sparkling white teeth emerged as a surprise contender in his Masters debut in 1981 [Norman would finish fourth], the American press dubbed him the Great White Shark.  “The media didn’t know who I was or anything about my background and started asking questions about the unknown blond with the aggressive style of play who used to swim and dive with the sharks,” recalled Norman.  In Europe, Norman won nine events in his first six seasons and claimed the circuit’s money title in 1982.  One year later, he came to America to play on the PGA Tour.

In June 1984, Norman earned his first PGA tour victory with a five stroke win at the Kemper Open.   At the U.S. Open one week later, he holed a 45-foot putt on the 72nd hole to force a playoff with Fuzzy Zoeller, which he lost the following day.  Norman had arrived.  He would go on to win the 1984 Canadian Open before posting three wins in 1986.  Norman reeled off seven multi-win seasons on the PGA Tour from 1986 through 1997.  His best came in 1995, when he won the Memorial, Hartford Open, and World Series of Golf en route to being named Player of the Year.  During that 11-year stretch, he won 14 Australian Tour events as well as four in Europe.

Greg Norman’s talent was never questioned but his heart often was.  Like Scott Norwood and Bill Buckner, his solid game was underscored by eye-popping failures.  Norman lost in a playoff at all four major championships, an ignominious sort of grand slam.  In 1986, he held the lead after 54 holes at each of the majors—infamously dubbed the “Saturday Slam” or “Norman Slam”—yet won only one, the Open Championship.  His 1996 Masters loss was particularly painful to watch, as the world’s best player collapsed, squandering a six-shot lead as golf fans got an eyewitness view of the agony of defeat.  They saw the crash unfolding but were helpless to stop it.  They felt the Shark’s pain.  It remains the most epic Masters meltdown in history.

Norman was also victimized by some highly improbable, ultra-dramatic golf shots.  At the 1986 PGA Championship, he was tied with Bob Tway on the final hole.  With the Shark safely on the green some 25 feet from the hole, Tway’s approach shot found a greenside bunker. As Norman sized up his first putt, Tway holed his bunker shot for a birdie and the win.  Nine months later, Norman faced Larry Mize in a playoff at the Masters.  On the second playoff hole, Mize missed the green with his approach shot, leaving him with a tricky 140-foot chip.  Norman played conservatively to the right fringe, 50 feet from the hole.  Sensing a two-putt par would win, Norman watched in bewilderment as Mize chipped in for one of the most unexpected Masters victories of all time.  It was the second straight time Norman would lose a major championship to a chip-in.  In 1990, Norman held a one-shot lead over Robert Gamez at the Nestle [now Arnold Palmer] Invitational.  The blond Aussie had finished his round and was signing his scorecard when Gamez holed his 176-yard approach shot for eagle and the win.

Just as Jack Nicklaus inspired a young Greg Norman, the Shark’s career success created a huge spike in the popularity of golf in Australia.  Current Aussie stars Adam Scott and Aaron Baddeley worshipped Norman as young players.  With a bright smile, engaging personality and a swashbuckling style, Norman was the Arnold Palmer [Daily Dose, 7/1/16] of his era.  From the 1981 Masters to the 1985 Open Championship, he made 18 consecutive cuts in majors.  During his career, Norman finished in the top ten in more than 38 percent of the majors he entered.  The Shark won the Byron Nelson Award for lowest scoring average five times and, along with Roger Federer [Daily Dose, 7/6/15], Muhammad Ali, and Usain Bolt [Daily Dose, 8/21/15] is a multiple winner of the BBC Overseas Sports Personality of the Year Award.  Mr. Norman was elected to the World Golf Hall of Fame in 2001 and is one of the most successful athletes-turned businessmen in the world.  Great White Shark Enterprises, which Norman founded in 1993, is a multinational corporation with hundreds of millions in annual earnings.  In 2015, the PGA of Australia established the Greg Norman Medal, awarded annually to the best Australian golfer of the year, male or female.