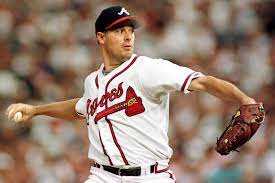 Greg Maddux is the only pitcher in big league history to record over 300 wins, collect over 3,000 strikeouts, and issue fewer than 1,000 walks.

A cerebral assassin on the mound, The Professor was a master.  Exhibiting pinpoint control, he got ahead in the count and was the most efficient pitcher in baseball.  Consider this stat line from a game he pitched against the New York Yankees in July 1997: nine innings, three hits, no walks, eight strikeouts, one pickoff, one double play, 84 pitches – all in two hours and nine minutes.

“Greg Maddux is so good,” said a scout for the Montreal Expos, “we should all be wearing tuxedos when he pitches.”

Standing six feet tall and weighing 170 pounds, the bespectacled Maddux was an average-looking right hander.  He looked more like an accountant than four-time Cy Young Award winner, but those looks were deceiving.  Maddux was quietly dominant, and elevated control to a whole new level.  “Greg Maddux could put a baseball through a Life Saver if you asked him to,” said hall of famer Joe Morgan.

Featuring a fastball that rarely topped the high 80s, Maddux valued movement and location over velocity.  When in a jam, he threw softer, rather than harder.  Maduux kept the ball low, moved it in and out, and lived on the corners.  “I just try to do two things: locate my fastball and change speeds.”  Maddux possessed an extraordinarily high pitching IQ, and his mastery of the strike zone seemed effortless.

Teaming the John Smoltz and Tom Glavine, The Professor was part of a dominant Atlanta Braves pitching staff that won 11 straight division crowns.  During that time, he went 198-88 with a 2.63 ERA.  Maddux went 6-14 in 1987, his first full season with the Cubs.  It would be two decades before the clever righthander posted another losing record.

In his prime, Maddux was nearly unhittable.

Maddux was a workhorse whose superb mechanics prevented fatigue while keeping him injury-free.  He led the National League in innings-pitched five straight seasons and complete games in three.  In 2005, Maddux led the NL in starts [35] at age 39.  And he was durable.  In 23 seasons, the sinewy righthander spent only 15 days on the disabled list, a two-week stint in 2002 with an inflamed nerve in his lower back.  An eight-time All-Star, Maddux led the league in ERA four times and helped the Braves win a World Series title in 1995.

The cerebral Maddux would study hitters, then exploit their weaknesses.

He featured an arsenal of pitches – fastball, change, slider, cutter, curve, and splitter – all of which he could throw for strikes.  Maddux refused to give in to hitters and his command of the corners – painting the black – was unprecedented.  He never walked more than 82 batters in any season, and in 2001 set an NL record by going 72.3 innings without surrendering a walk.  “The key to pitching,” said the humble Maddux, “is to have the ability to throw a strike when they’re taking and throw a ball when they’re swinging.”

He spent much of his childhood in Madrid before returning stateside to attend Valley High School in Las Vegas.  When older brother Mike was drafted by the Philadelphia Phillies in 1982, Maddux’ father, Dave, told the Phillies scout who signed his eldest son, “You will be back later for the little one.”  It seems father knew best as, two years later the Chicago Cubs selected Greg Maddux with the 31st pick of the 1984 amateur draft.

Maddux made his big league debut for the Cubs in September 1986.

He made his first All-Star team two seasons later and won 20 games and the NL Cy Young Award in 1992.  After seven seasons in Chicago, Maddux signed with the Braves in 1993.  He enjoyed his greatest success in Atlanta before returning to the Cubs in 2004.  He finished his career on the West Coast, serving two stints with the Dodgers and playing one season in San Diego before retiring after the 2008 campaign.

Mr. Maddux won 355 games, eighth-most of all time.  Since the start of the post-1920 live-ball era, only Warren Spahn recorded more, with 363.  Maddux is one of ten pitchers to achieve both 300 wins and 3,000 strikeouts.  He posted a career winning percentage of .610, and only a dozen hurlers in history have pitched more than his 5,000 career innings.

Baseball statistics guru Bill James believes Maddux is the most underrated player in baseball history.  Although he only won 20 games twice, he won 19 games five times.  Maddux had only one season of 200 or more strikeouts but whiffed 199, 198 and 197 in three other years.  The slender righthander holds the MLB record for most seasons leading his league in starts [7] and most seasons in the top ten in wins [18].

On this date in 2014, Greg Maddux was elected to the Baseball Hall of Fame on the first ballot.

He was joined by close friend and former teammate Tom Glavine and the Big Hurt, slugger Frank Thomas.  The three players were elected together in their first appearance on the ballot.  The only other time in MLB history when that occurred was 1999, when Nolan Ryan, George Brett and Robin Yount went into Cooperstown as first ballot hall of famers.