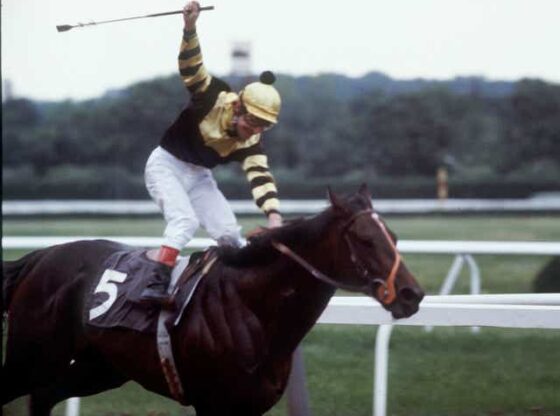 All 143 Kentucky Derby winners are special.  But not all are equal.  Here are the ten best thoroughbreds ever to win the Run for the Roses.

Gallant Fox won the 1930 Kentucky Derby, then followed with victories in the Preakness Stakes and Belmont Stakes to become the second horse in history to win those three races.  A New York Times writer dubbed the accomplishment the Triple Crown, and the name stuck.  Gallant Fox is the only Triple Crown winner to sire a Triple Crown winner: Omaha, who swept the “Big Three” in 1935.

Whirlaway demolished the field in 1941, winning the Kentucky Derby by a record eight lengths, a record that still stands.  Dubbed Mr. Longtail, Whirlaway took the Preakness and Belmont to become racing’s fifth Triple Crown winner.  And he just might have the coolest name in horse racing history.

Weeks after injuring a hind leg at the 1943 Wood Memorial, Count Fleet arrived at Churchill downs wearing ice packs.  With legendary jockey Johnny Longden aboard, the bay stallion won the Derby by three lengths, the Preakness by eight and the Belmont by 25 – the second largest margin of victory behind Secretariat’s 31.  The 1943 Horse of the Year also sired a derby winner, 1951 hero Count Turf.

Northern Dancer won 14 of 18 career starts and never finished out of the money.  The bay beauty took the 1964 Derby in record time, then claimed the Preakness two weeks later.  Northern Dancer went on to sire and grandsire several of the best horses in history, including Alydar, Affirmed and Genuine Risk.

Barbaro won the 2006 Kentucky Derby by six and a half lengths.  Two weeks later, he shattered his leg at the Preakness which ended his racing career.  He finished his career undefeated in six starts but did not race long enough to fulfill his potential.  Complications from the broken leg led to the colt being euthanized.  The Barbaro statue outside the main gate at Churchill Downs is a fitting tribute to this great champion.

The horse with the misspelled name – American Pharoah —  is the only horse in history to win the Derby, Preakness, Belmont and Breeders Cup Classic in the same year – 2015.  The most recent Triple Crown winner, Pharoah broke a 37 year-long Triple Crown drought on his way to being named 2015 Horse of the Year.

One of the best rags to riches stories in racing history, Seattle Slew was purchased for $17,500 as a yearling.  The brown stallion became the tenth Triple Crown winner and the only horse to accomplish the feat while undefeated.  Slew is the only Triple Crown winner to defeat another Triple Crown winner.  In 1978, he beat Affirmed by three lengths in Belmont Park’s Marlboro Cup.

Considered by many the greatest racehorse in history, Citation raced an astounding 29 times as a three-year-old and won 27.  The first horse to eclipse $1 million in career earnings, The Big Cy won 16 consecutive races, including the Triple Crown in 1948.

Voted Horse of the Year at two, three and four years of age, Spectacular Bid is the greatest horse never to win the Triple Crown.  After winning the Derby and Preakness in 1979, The Bid stepped on a safety pin the morning of the Belmont and finished third.

Secretariat owns the fastest time in Kentucky Derby history.  Big Red also holds the track record at Pimlico and Belmont Park.  The latter was a 31-length victory that cemented the 1973 Triple Crown as well as his place as the best thoroughbred in racing history.