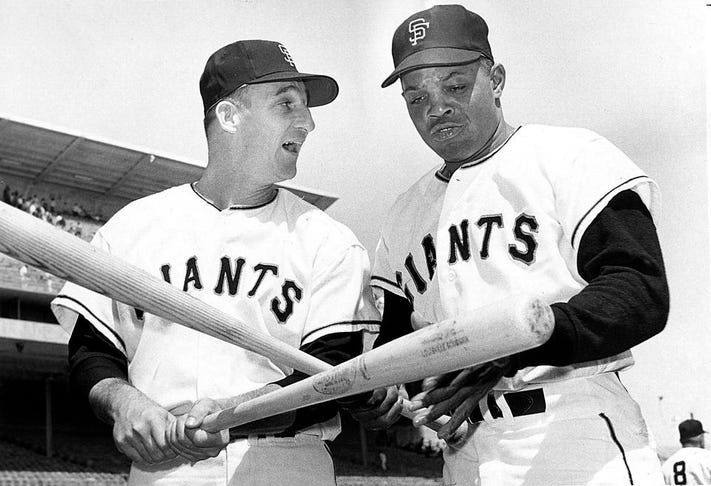 On July 2, 1963, Juan Marichal outdueled Warren Spahn in a complete game, 16-inning thriller.  It was the greatest game ever pitched.

As the 1963 major league baseball season moved into its fourth month, the Milwaukee Braves visited San Francisco for the second time.  The Giants were in third place in the National League, 1 ½ games back of first-place St. Louis, while the Braves were 6 ½ back.  In a Tuesday-night opener of a three-game set, the Giants sent 25-year-old Juan Marichal out to face veteran left-hander Warren Spahn, 17 years his senior.

The right-handed Marichal was in his fourth big-league season.  He came into the game having won 12 of 15 decisions, including his last eight straight.  The Dominican Dandy boasted a 2.38 ERA and had no-hit Houston just 17 days earlier.  A 14-time All-Star, Spahn was in his 19th season.  The 42-year-old southpaw was 11-3 with a 3.12 ERA for 38-38 Milwaukee.  Hooks hadn’t allowed a walk in 18.1 innings and had no-hit this same Giants lineup two years earlier.

Nearly 16,000 hardy souls turned out on a chilly, windy night at Candlestick Park.  One of them was 28-year-old Bud Selig, a Milwaukee-based car-leasing executive who, later in the decade, would buy the Seattle Pilots and move them to his home town after the Braves bolted for Atlanta.

Marichal took the mound just after 8:00 p.m.  Four hours and 15 innings later, he was still out there.  And so was Warren Spahn — in a scoreless pitching duel.  Manito had dodged trouble in the fourth.  Henry Aaron led off with a blast that appeared to be leaving the park before the strong winds blowing in off Candlestick Point held it up enough for left-fielder Willie McCovey to corral it a few feet in front of the fence.  Then, with two outs and Norm Larker on second, Del Crandall singled to center for what looked to be the game’s first run.  But Willie Mays fielded the ball on one hop and fired a bullet to the plate in one fluid motion to nail Larker and end the inning.

McCovey almost ended it with a walk-off homer in the bottom of the ninth, but first base umpire Chris Pelekoudas called it foul.  Spahn then retired McCovey to send the game to extras.

Marichal was brilliant.  After walking Aaron in the eighth, the Giants workhorse retired 16 in a row before surrendering a single to Frank Bolling in the top of the 13th.  Marichal, who held Aaron hitless in six trips to the plate, got The Hammer to pop out to end the threat.  The Giants starter was scheduled to hit third in the bottom of the 13th.  Thinking of sending up a pinch-hitter to bat in the pitcher’s spot, Giants manager Alvin Dark asked his tireless right-hander if he’d had enough.  Marichal would have none of it.  “He’s 42 and I’m 25,” he barked at his skipper.  “You can’t take me out until that man is not pitching.”

With two out in the bottom of the 14th, the Giants loaded the bases before Spahn coolly retired Ed Bailey on a fly to center, ending the inning and extending the deadlock.  Marichal retired the side in order in the 15th, then Spahn matched that.  Using high leg kicks that made it tough for batters to pick up the baseball, the two masters recorded 90 outs through 15 innings of gutsy pitching — neither yielding a run.

In the 16th, Marichal surrendered a two-out single to Denis Menke, then got Larker on a comebacker to end the threat.  It was the Dominican Dandy’s 227th pitch of the night.  In the bottom half of the frame, Spahn retired Harvey Kuenn on a flyout.  That brought up Mays, who was hitless on the night.  Mays drove Spahn’s first pitch – a hanging screwball – through the teeth of the wind in left for a walk-off homer.  It was Spahn’s 201st pitch of the evening and one of six walk-offs the Say Hey Kid would belt in remarkable career.

“I’ve been around a long time,” said Braves left fielder Henry Aaron, who went 0-for-6 on the evening, “and that’s the finest exhibition of throwing I’ve ever seen.”

The game ended at 12:31 a.m. July 3.  When Spahn arrived in the Braves clubhouse after conducting postgame interviews with reporters, everyone rose, applauded and lined up to shake the antediluvian southpaw’s hand.  “If you didn’t have tears in your eyes,” recalled Braves pitcher Bob Sadowski, “you weren’t nothing.”

Both men made their scheduled starts five days later.  Spahn’s elbow flared up later in the month, causing him to miss two starts.  But he pitched through it to lead the NL in complete games in 1963, with 22.  Marichal led the league in innings pitched in 1963, with 321.1.  The following season, he topped the circuit with 22 complete games.

Warren Spahn won 363 games, more than any other left-handed pitcher in history.  Juan Marichal won more games than any pitcher in the 1960s, including Sandy Koufax and Bob Gibson.  Marichal won a league-best 25 games in 1963 and won more than 20 in five of the next six seasons.  Spahn went 23-7 in 1963.  It was the 13th and final year that the great left-hander would win 20 games or more.  Mr. Spahn, who died in 2004, was voted into the Baseball Hall of Fame in 1973.  Marichal, who was a ten-time All-Star, landed in Cooperstown a decade later.

The Greatest Game Ever Pitched involved two starters throwing 15-plus inning complete games, something that had not happened in the big leagues – before or since.