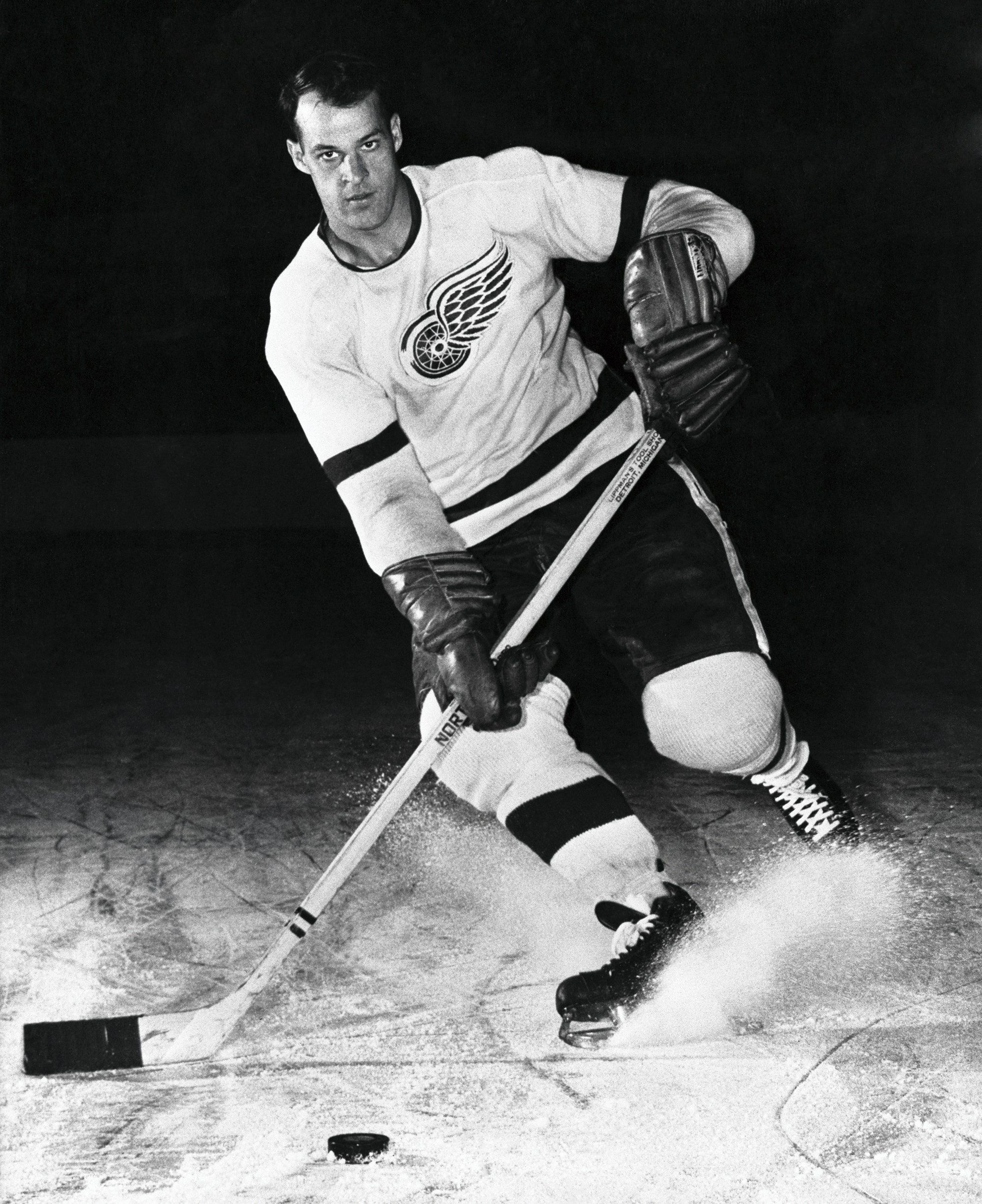 “He is, he was, and he will always be the greatest of all time.”  — Wayne Gretzky, speaking of Gordie Howe in 2015

The most complete player ever to play the game of hockey, Gordie Howe could do it all.  In a career that spanned five decades, Howe won six scoring titles, six NHL MVP awards, and four Stanley Cups.  At the time of his retirement in 1980, Howe held nearly every NHL scoring record.  Until Wayne Gretzky came along, his goal total of 801 was considered unapproachable.

“Wait for the next line change and you can get even.”

Gordie Howe’s toughness was unmatched.  A prolific scorer whose flying elbows were legendary, Howe was feared within the NHL – and revered throughout the hockey world.  There was no “Mr. Football” nor a “Mr. Baseball.”  However, there was a “Mr. Hockey,” and that man was Gordie Howe.

“If you can push someone around, then you push him around.”

Howe had no weaknesses.  A nifty skater, he could shoot, pass and defend.  A rugged winger, he combined skill, athleticism, longevity and physicality like no player – ever.  “The Great Gordie” played in more games [2,421] and more seasons [32] than any hockey player in history.  There will never be another like him.

“All hockey players are bilingual.  They know English and profanity.”

Once, during a road game in Maple Leaf Gardens, the Red Wings were faring badly, both on the scoreboard and in the penalty department.  The ref – who’d been raised in Toronto, was liberally sending Wings to the box.   After the Leafs scored yet another power play goal against Detroit, Howe skated over to the head official.

“Well, I’d have to give you two minutes, Gord.”

“Oh.  What would you do if I just thought that instead?”

“I couldn’t do anything, Gord.  Your thoughts are your own.”

Howe’s brawn and physical play inspired the coining of The Gordie Howe Hat Trick  — a goal, an assist and a fight all in the same game – which is now a part of the hockey lexicon.  Mean and nasty on the ice, Gordie was all class off of it.  Benevolent, kind and trusting, he was one of the most beloved figures not just in hockey, but in all of sports.

“I always tell kids, you have two eyes and one mouth.  Keep two open and one closed.  You never learn anything if you’re the one talking.”

In 1971, Howe retired after 25 seasons with the Red Wings.  He came out of retirement in 1973 to play alongside his sons, Marty and Mark, for the Houston Aeros of the World Hockey Association.  In his first season, the 45-year-old Howe put up 100 points in 70 games.  He helped Houston win the first of back-to-back league titles, and was named MVP of the WHA.

“If you play a little rough, you get respect.  And with respect you get just a little more space on the ice.”

When the WHA folded in 1979, the three Howes joined the NHL Hartford Whalers.  Nearing his 52nd birthday, Gordie was selected to play in the mid-season All-Star Game, to be played in Detroit.  Playing in his 23rd and final Midwinter Classic, Howe skated alongside the second-youngest to ever play in an All-Star Game, 19-year-old Wayne Gretzky.  After the greatest player in Red Wings history received two lengthy, deafening ovations from the Detroit crowd, Mr. Hockey recorded an assist to help his Wales Conference team to a 6-3 win.

Born in a farmhouse in Floral, Saskatchewan, Howe was one of ten children.  He started playing hockey at eight, quit school to help support his family, and tried out with the New York Rangers at 15.  Howe made his debut for the Detroit Red Wings in 1946, scoring as an 18-year-old in his first NHL game.  A great goal scorer and gifted playmaker, he finished in the top five in scoring for 20 straight seasons.

“My philosophy is never start talking about if, and, but, or the past, because 90 percent of what follows will be negative.”

Howe was to hockey what Arnold Palmer was to golf.  The game’s most iconic figure, Howe transcended the sport, spreading hockey’s popularity well beyond the upper Midwest, New England and Canada.  “Number 9” spent 25 seasons with the Red Wings, six more in the WHA and retired at 52 after a final season with the Whalers.

In 1998, The Hockey News released its List of the Top 100 NHL Players of All Time.  Howe was listed third, behind Gretzky and Bobby Orr.  Both Gretzky and Orr have stated many times that Gordie Howe was the greatest player.