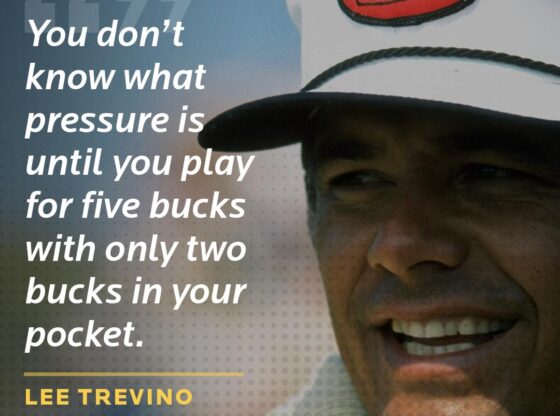 Today we celebrate the birthdays of two members of the World Golf Hall of Fame.

Ray Floyd, winner of 65 professional golf tournaments – including four majors, was born on this date in 1942.  Tom Watson, who was born in Kansas City on this date in 1949, was the top-ranked player in the world from 1978 to 1982.  In honor of these two legends, we bring you some of the best golf quotes ever uttered.

“You don’t know what pressure is until you play for five bucks with only two bucks in your pocket.”  — Lee Trevino

“Golf is a game when you yell ‘fore,’ shoot six and write down five.”  — Paul Harvey

“I have a tip that will take five strokes off anyone’s golf game.  It’s called an eraser.”  — Arnold Palmer

“They call if golf because all the other four-letter words were taken.” – Raymond Floyd

“Putts get real difficult the day they hand out the money.”  — Lee Trevino

“Give me golf clubs, fresh air and a beautiful partner and you can keep the clubs and the fresh air.” – Jack Benny

“A lot of guys who have never choked have never been in the position to do so.”  — Tom Watson

“The older I get the better I used to be.”  — Lee Trevino

“The three things I fear most in golf are lightning, Ben Hogan and a downhill putt.”  — Sam Snead

“Golf is a game played on a five-inch course – the distance between your ears.” – Bobby Jones

“If you are caught on a golf course during a storm and are afraid of lightning, hold up a 1-iron.  Not even God can hit a 1-iron.” – Lee Trevino

“Nobody ever remembers who finished second at anything.” Jack Nicklaus

“In golf, ‘close’ is like the North and South Rim of the Grand Canyon.” – Johnny Miller