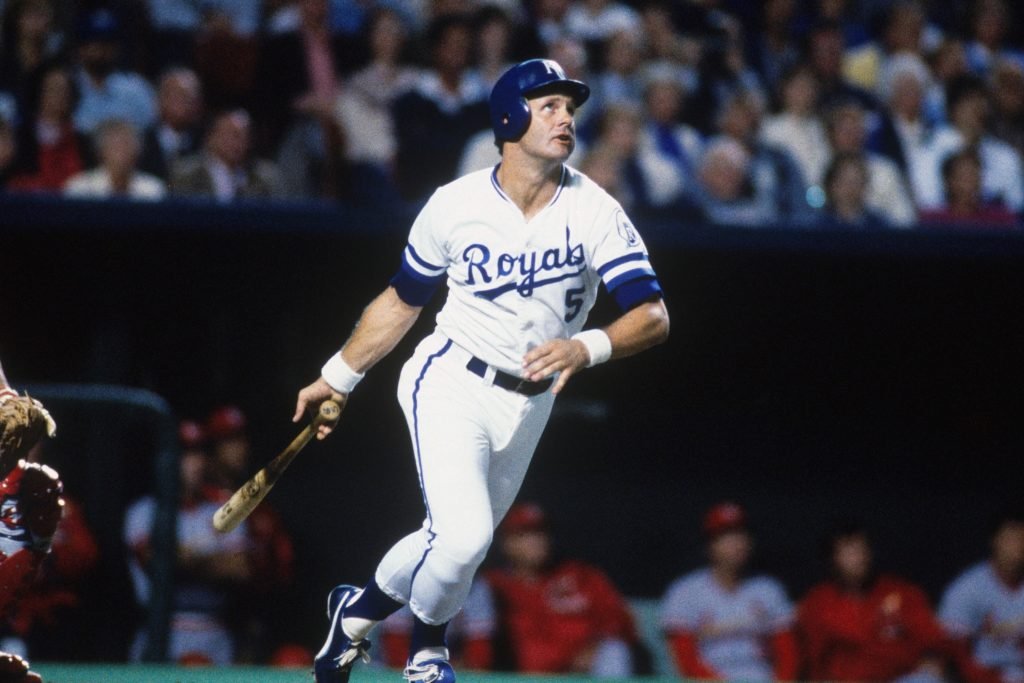 George Howard Brett is the best player ever to wear the uniform of the Kansas City Royals.

Born in Glen Dale, West Virginia on May 15, 1953 he was the youngest of four boys in a sports-minded family.  His three older brothers all played professional baseball including the second oldest, Ken, who pitched in the 1967 World Series at age 19.  The family moved to El Segundo, California and George played baseball for El Segundo High School, graduating in 1971.  He was selected by the Kansas City Royals with the 29th pick in that year’s MLB Draft and was sent to Billings, Montana for Rookie League, where he played shortstop.  He played in Single-A the following year and Triple-A in 1973 but was shifted to third base because he had trouble moving to his right defensively.  He made his big league debut on August 2, 1973 at the age of 20, going one-for-four against Stan Bahnsen of the Chicago White Sox in a 3-1 win.

Brett won the starting job at third base in 1974 but struggled at the plate until mid-season when he spent the All-Star break working with the Royals’ legendary hitting coach, Charlie Lau, and finished the year with a .282 batting average.  The following season he hit .308 and led the league in hits and triples.  One year later, he and teammate Hal McRae went into the final game of the season in a close race for the batting title.  Brett led by less than .001 going into his final at bat of the year and hit an inside-the-park home run.  McRae came up next and grounded out and George Brett won his first AL batting title with a .333 average.  In May of 1976, Brett had three or more hits in six consecutive games, a Major League record and the Royals won the first of three straight AL West Division titles.

His best season came in 1980, when he won the AL MVP and batted .390.  He chased the elusive .400 average for much of the year in a quest to become the first player to reach that mark since Ted Williams in 1941 and was at or above .400 as late as September 19.  He led the league in slugging and on-base percentage and knocked in 118 runs in while playing in 117 games, becoming the first player to average one RBI per game since Walt Dropo in 1950.  The Royals earned the franchise’s first-ever trip to the World Series in 1980 but lost in six games to the Philadelphia Phillies despite Brett’s .375 average during the Fall Classic in an series that pitted him against Mike Schmitt who, with Brett, is considered the greatest third baseman in baseball history.  The Royals returned to the World Series in 1985, a season in which Brett finished in the top 10 in the AL in 10 different offensive categories while also winning his first Gold Glove.  He led the Royals to the World Series with an MVP performance in the ALCS, including going 4-for-4 with two homers and a double in a pivotal Game 3 that saw the Royals down two games to none.  He followed that by batting .370 in the World Series and collecting four hits in Game 7 to help the Royals beat the St. Louis Cardinals for their first championship.

On this date in 1979, George Brett collected his 1,000th career hit, a single to right field off of Fergie Jenkins that scored a run in a 5-4 Royals’ victory.

“I could have played another year, but I would have been playing for the money, and baseball deserves better than that”— George Brett upon his retirement