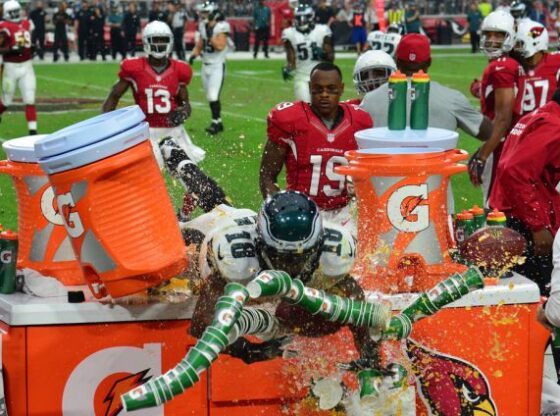 Served on the sidelines in the sweltering heat of The Swamp in Gainesville, the drink helped fuel the Florida Gators to a 14-7 upset win over No. 5 LSU.

In 1961, after earning his bachelor and medical degrees from the University of Texas, James Robert Cade became a professor of nephrology – the study of kidney medicine – at the University of Florida.  Four years later, Dr. Cade was approached by Dewayne Douglas, coach of the Gators freshman football team, who inquired as to why his players never needed to urinate during practices or games.  Cade began investigating dehydration.  He soon learned that football players were losing water through perspiration and failing to replace fluid.  His research revealed that players were losing up to 18 pounds during a three-hour game, and that more than 90 percent of that loss was water.

In addition to being a physician, Cade was a scientist and inventor.  He developed the first shock-dissipating football helmet, as well as a method for treating autism through diet modification.  Cade and his team of UF researchers monitored football players, and discovered the athletes experienced decreases in plasma and blood volume.  They also learned players were losing sodium – which keeps water in the blood and cells – and chloride, through sweat.  Cade and his three colleagues had recently learned of cutting-edge research indicating how efficiently the body absorbed water when small amounts of salt and glucose were added.

Using $ 43 in lab supplies, Dr. Cade and his team embarked upon developing a glucose-and-electrolytes rehydration drink.  The original formula consisted of water, salt, sodium citrate, fructose, and monopotassium phosphate.  Cade tried it – and threw up.  One of his assistants, Dana Shires, sipped it and “thought it tasted like toilet bowl cleaner.”  To make it more palatable, Cade’s wife Mary, who was a nurse, suggested adding lemon juice and cyclamate, an artificial sweetener.

In October 1965, they tried the drink – dubbed Cade’s Aid or Cade’s Cola — on the freshman football team, which unexpectedly trounced the junior varsity in a practice game with a dominant second half performance.  Florida head football coach Ray Graves took notice and immediately ordered up a batch for his varsity squad’s game against LSU the following day.  Cade and his colleagues worked through the night, squeezing lemons by hand, to have an ample supply of the drink by game time.  The next day, Florida came from behind in 102-degree heat to upset LSU and went on to finish the season 7-4.

Led by Heisman Trophy-winning quarterback Steve Spurrier, the Gators rolled to an 8-2 record in 1966 while earning a reputation as a second-half team.  Soon, other teams wanted to know what the Gators were drinking on the sidelines.  The Florida Times-Union ran a story entitled “One Lil’ Swig of that Kickapoo Juice and Biff, Bam, Sock – its Gators 8-2.”  After trouncing the University of Miami in the regular season finale, Coach Graves talked with a Miami Herald reporter about the beneficial effects of the rehydration drink.  It quickly became national news and, in Cade’s words, “Our stuff was on its way.”

Dr. Jim Free, one of the UF researchers, suggested they call the drink Gatorade, and it stuck.  Florida met Georgia Tech in the Orange Bowl at the end of the 1966 season.  The Gators, after a miserable first half, dominated Georgia Tech in the third and fourth quarters to earn their first Orange Bowl victory, 27-12.  After the game, Yellow Jackets coach Bobby Dodd told reporters, “We didn’t have Gatorade.  That made the difference.”

Success on the gridiron led to national publicity.  Cade offered to sell his invention – which he patented —  to the University of Florida for $10,000, but the school balked.  In 1967, a food company, Stokely-Van Camp, paid the doctors $ 25,000 up front, a $5,000 bonus and a five-cent royalty on every gallon sold.  They began marketing it as the “Beverage of Champions.”  Stokely hated the name Gatorade, believing it was too parochial, but stuck with it after research showed consumers liked the name.

Stokely rolled out the drink in July 1967 and paid $25,000 to be the official drink of the NFL – a title it holds to this day.  Soon the product that Florida didn’t believe had much potential was a marketing phenomenon.  Cade’s concoction changed the sports world as much as any product in history.  The Kansas City Chiefs had the thirst quencher on the sidelines when they crushed the Minnesota Vikings in Super Bowl IV, and the 1991 ad campaign featuring Michael Jordan urged the world to “Be Like Mike” and drink Gatorade.  The official sports drink of every major U.S. professional sports league, Gatorade sponsors NASCAR, Formula One, and hundreds of college and high school sports teams.  Since 1985, one Gatorade High School Player of the Year award is given to the top student-athlete in seven different sports in each of the 50 states and the District of Columbia.

The Gatorade formula has changed little over the years.  Early advertisements claimed that it moved through the body 12 times faster than water.  Research found that this was not true – Gatorade and water move through the body at the same rate.  The rehydration beverage is consumed not only by athletes, but is used to aid surgical patients’ post-operative recovery and to treat cholera in third world countries.

Since 1973, the University of Florida has received more than $150 million in royalties from Gatorade.  Now owned by Chicago-based PepsiCo, the brand generates over $5 billion in annual sales, is sold in 80 countries and owns 75 percent of the sports-drink market it created.  More than five decades after the invention of Gatorade, the men who developed it and their families have received more than $ 1 billion in royalties from its sales.

A kind and generous man, Dr. Robert Cade was inducted into the UF Athletics Hall of Fame in April 2007.  Ironically, the nephrologist died of kidney failure seven months later, in November.  He was 80.