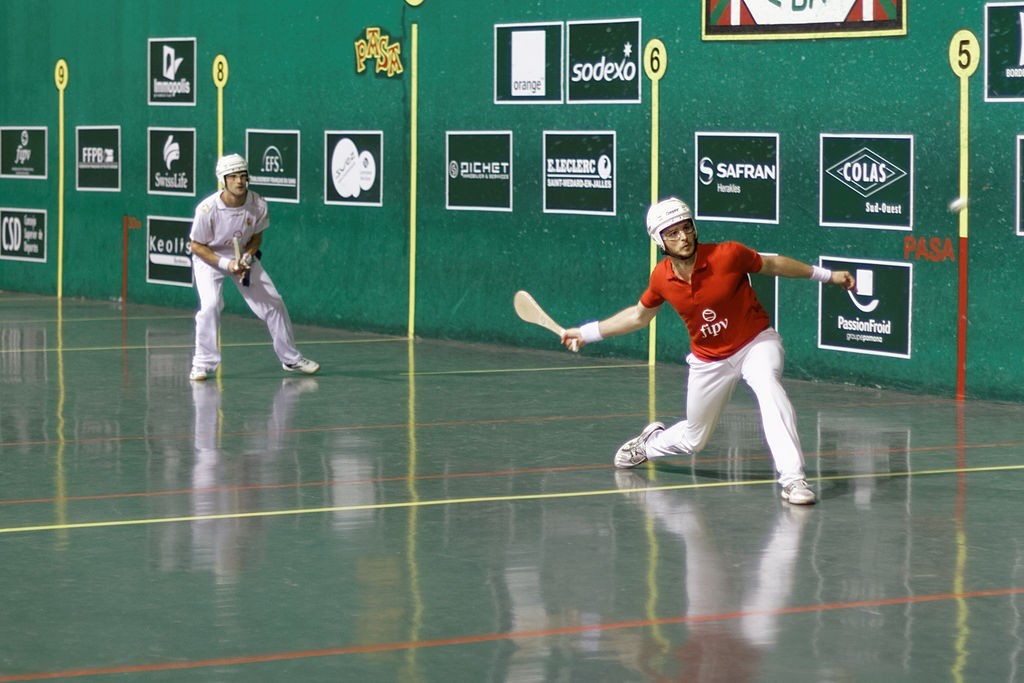 Frontenis is known as the fastest sport in the world.

A variation of Basque Pelota, frontenis is played on a three-walled court using racquets and a rubber ball.  Popular in Spain, Argentina and Mexico, it is played in nearly 20 countries around the world.  Frontenis originated in Mexico around 1900, where players used racquets to hit the ball against the walls of churches.  Originally called Frontontenis [from fronton and tenis – “pelota court” and “tennis” in Spanish, respectively], the game eventually came to be called Frontenis.

Frontenis was created in Mexico in 1900.  The first court was built on Fernando Torreblanca’s property, where the game was played by the top tennis players in Mexico.  It came to the Iberian Peninsula in the 1940s by way of the Canary Islands before migrating to the rest of Europe.  In 1952, frontenis was recognized by the International Federation of Basque Pelota [IFBP] as an international sport.  That year, the first World Championship was held in Spain – in San Sebastian, along the Bay of Biscay.

In the early 1980s, noted Phoenix heart surgeon, Ted Dietrich, helped introduce frontenis to the U.S.  He brought several of the great Mexican players to Arizona for exhibitions, held at a court he had built on the campus of the Arizona Heart Institute.  Charlie Ganz, an avid tennis player and close friend of Dietrich’s son, Tad, embraced frontenis.  He quickly became one of the most promising players in the U.S.  “Frontenis demands great mobility and skill,” observed Ganz. “It takes coordination along with physical and mental agility.”  In an effort to qualify for the Olympics, Ganz – dubbed Cheesestick – trained tirelessly.  The physical pounding took its toll, eventually costing him his hips: Mr. Ganz had one replaced in 2012 and the other the following year.

Frontenis is played within the Very Short Court  – one of five fronton sizes used in Basque Pelota.  The court is 30 meters in length, ten meters wide, and ten meters high.  It consists of three walls: the front wall, left [or help] wall, and rebound wall.  Players face the front wall.  The help wall is to their left, and is marked with lines every 3.5 meters to help players see where they are on the court.  The rebound wall is situated in the back of the court.  It has no markings and is the same size as the front wall.  The left and rebound walls have 10 cm metallic sheets along their rims to provide an audible indication of a ball striking outside of the playable area.

Frontenis has twice been played as an exhibition sport in the Summer Olympics.  In 1968, the first Men’s Doubles tournament was staged in Mexico City.  Six countries participated, including the U.S., which finished last.  The gold medal went to Mexico.  The sport reappeared at the 1992 Barcelona Games, where Mexico again claimed gold in both Men’s and Women’s Doubles.  The U.S. did not send a team to Barcelona.  The Olympic qualifying tournament was held in Cuba in 1990, and the U.S. declined to participate, thus foregoing the opportunity to earn a spot in the 1992 Summer Games.

Originally played with ordinary tennis balls, the fiber cover cushioned their bounce, slowing the game.  To speed the game, the fabric cover of the tennis balls was removed.  Later, livelier balls made of oilcloth were imported to Mexico from England and the U.S.  Ball imports ceased during the Second World War, forcing a need to find substitutes.  Mexican inventor Francisco Beltran experimented with pressurized rubber balls, then began manufacturing them.  In 1945, the first frontenis ball company – Grupo 201 Oficial – was founded by Beltran and Dr. Jesus Ledesma.

Much like the ones used in tennis, frontenis racquets are made of wood, fiber, metal or graphite.  Racquet technology has evolved since the birth of the sport in 1900.  Originally fashioned out of wood with strings made of animal gut, the first racquets were heavy and awkward.  Modern racquets are made of composite materials, while synthetic strings have become the norm.  There is no limit on the length and width of the racquet, nor is the weight and tension of the cords regulated.  Unlike tennis, which outlawed double strung [or spaghetti] cords in 1978, double-corded racquets are used in frontenis, as they impart more spin on the ball than conventional strings.

Although rules vary slightly from nation to nation — and from the national to international level – games include two teams of two players each.  Play begins with a serve delivered from the larga line.  The server bounces the ball, then drives it off the front wall.  The serve must strike the front wall above the low line, which sits just above the floor, and the high line demarcating the high off-area.  Served balls may be played directly off the wall, or on one bounce.  The court floor is divided into thirds, and legal serves must land in the middle third.  Serves that land in the third of the court nearest the front wall result in a point for the receiving team, while serves that land in the back third are considered faults.  As in tennis, the first fault results in another service opportunity, while two faults result in a point for the opponent.

A team scores when their opponent cannot return a shot before it bounces off the floor more than once, or by playing a shot that rebounds off the front wall and floor before going outside the playing area.  Each served ball results in a point for one of the two teams.  Games are played to 21 points, and teams must win by two.  At the lower levels, frontenis matches are best of three, while International matches are best of five.

While frontenis can be played as singles or doubles, only pairs are played at the international level.  Every European country that plays pelota is a member of the Union of European Basque Pelota Federations [UEBPF], and all the countries that play Basque pelota are members of the IFBP.  The game is played at the highest level in Mexico and Spain, where nicknames are muy importante – very important.  Dubbed “Veneno” [Poison], the great Mexican player Jose Becerra revolutionized the sport when he began dominating with a lighter racquet.  The legendary Jorge Marron not only beat opponents, he destroyed them, earning him the moniker “El Asesnino” [The Assassin].  Perhaps no player in frontenis history was more agile than Jorge Loaiza.  Known as “El Chicharo” [The Pea], the diminutive Loaiza had no weakness.

Campionat del Mon de Pilota — The Basque Pelota World Championships — are contested every four years, and include both Men’s and Women’s Frontenis.  The 2018 Championships took place October 15 through 20 in Barcelona, where Dan NecoL claimed the gold medal in the Men’s competition.