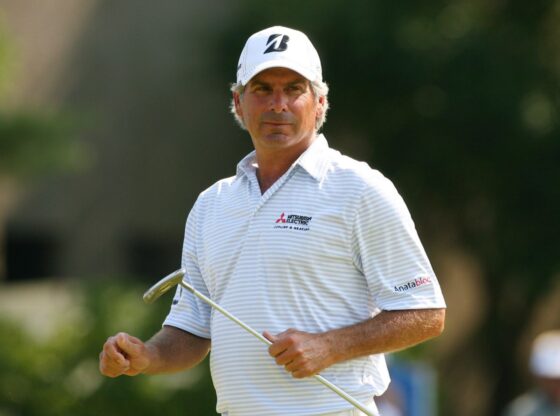 Frederick Stevens Couples is one of the coolest cats ever to play the game of golf.

Born in Seattle, Washington, on October 3, 1959, his paternal grandparents migrated from Italy and changed their name from Coppola to Couples to make it sound less ethnic.  Fred’s mother Violet was of Croatian descent and his father worked as a groundskeeper for the Seattle Parks Department, maintaining a modest house on Beacon Hill near Jefferson Park, a city golf course where Fred would play for hours.  Couples attended O’Dea High School, an all-male Catholic school in Seattle’s First Hill neighborhood, graduating in 1977.  He accepted a golf scholarship to the University of Houston, where he roomed with future Tour player Blaine McCallister and Jim Nantz [Daily Dose, August 20], who would become the voice of golf on CBS.

Couples turned pro in 1980.  Three years later, he won his first event with a birdie on the first playoff hole at the Kemper Open.  After three more wins in the next nine years, Couples won five events between June 1991 and April 1992 to become the top-ranked player in the world.  The highlight of his career came at the 56th Masters in April 1992, where he was one shot back of Craig Parry at the start of the final round.  After getting to 12 under par at the turn, Couples held a two-stroke lead over 1976 Masters champion Raymond Floyd as he stood the tee at the 12th hole, the most famous par-three in all of golf.  “A lot of things were flashing through my mind on the 12th tee.  That’s the most nervous I have ever been.”  Couples aimed for the center of the green, 155 yards away.  The pin was tucked in the upper-right portion of the putting surface and Couples’ eight-iron hit the bank in front of the green that slopes toward Rae’s Creek.  99 times out of 100, that ball ends up in the water.  On Masters Sunday 1992, it hung up in thicker grass along the water’s edge and stayed dry.  Freddie got it up-and-down for par, saying, “That was the biggest break of my life,” then birdied the 14th hole en route to victory. Afterward, the two former college roommates reenacted a scene they had rehearsed at Houston, with Jim Nantz presenting the Green Jacket to Couples in the Butler Cabin at Augusta National.

Fred Couples has played in 612 events on the PGA Tour, winning 15 times, finishing second on 17 occasions and posting 162 top tens during his 36 year career.  His only major championship on Tour came at Augusta in 1992 but he has won eleven times, including two majors, since joining the Champions Tour in 2010.  Boom Boom has won 57 professional tournaments worldwide to earn over $22 million in prize money.  His golf sweet is pure poetry—rhythmic and picturesque.  He swings so slowly and evenly that he appears to cast the ball instead of strike it.  Nantz observed, “The first time I witnessed Fred hit a golf ball I knew this guy was destined for greatness.  The golf ball flew off the clubface like it had been shot out of a cannon.  It was jaw-dropping.”   Couples big shoulder turn creates torque, resulting in unbelievably long drives from a player than stands 5’11” and weighs 185.  Fred is stylish, casual and unhurried—he is one of few pros that plays without a golf glove–but is not without critics.  Gary McCord said he has “all the motivation of melted ice cream” and Tom Weiskopf [Daily Dose, July 13] added, “Fred Couples.  Great talent.  No goals in life.  Not one.”  For two years in the early 1990s, Couples was the best player on the planet, earning Player of the Year honors while winning the Vardon Trophy for lowest scoring average in 1991 and 1992.  In the five weeks leading up to the ’92 Masters, Couples won two events and finished second in two others.  Mr. Couples won golf’s fifth major—The Players Championship—in 1984 and 1996 and holds the course record [63] at TPC Sawgrass, one of the toughest courses on Tour.   Couples has played on five Ryder Cup teams, has nine top ten finishes in the Open Championship and is always brilliant in the Masters, having made 23 cuts in 31 starts and eleven top ten finishes.  One of the most popular golfers of all time, Frederick Stevens Couples was elected to the World Golf Hall of Fame in 2013.

On this date in 1992, Fred Couples fired a final round 70 to win the Masters Championship.  He finished at 13-under par, two ahead of 1976 Masters champion Raymond Floyd.