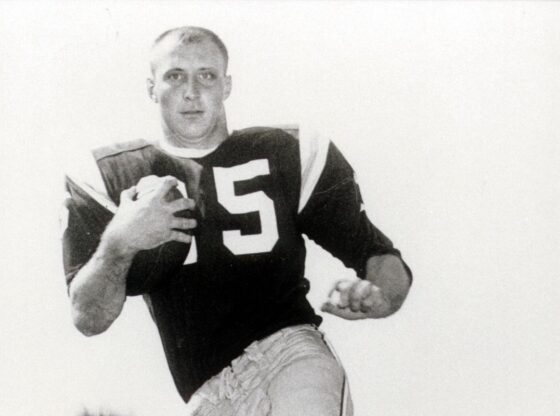 Happy 73rd birthday to one of the greatest route runners in pro football history.

Frederick S. Biletnikoff was born in Erie, Pennsylvania—a steel mill town along the banks of Lake Erie—on this date in 1943.  His parents were Russian emigrants who arrived in the U.S. during the Russian Civil War [1917-22] and his father, Ephriam “Snooky Bill” Biletnikoff was an AAU boxer.  Fred attended Erie Technical Memorial High School [now Central Tech], where he was all-state in football and basketball while also running track for the Falcons.  In 1961, he declined scholarship offers from several of the traditional eastern football powerhouses to attend Florida State University and play for head coach Bill Peterson.  Freshmen were ineligible for varsity football at that time, so Biletnikoff joined the Seminoles in his sophomore year, catching six passes and scoring one touchdown before suffering a broken foot that ended his season.  Prior to the 1963 campaign, Peterson installed a pro-style offense that featured four receivers and placed an emphasis on passing, something Biletnikoff had been accustomed to in high school, as Erie Tech had thrown the ball 25 times a game when he was there.  Biletnikoff responded with 24 catches while averaging nearly 15 yards per grab.  He also started at cornerback, contributing 39 tackles with one interception, which he returned 99 yards for a touchdown in the season opener against Miami to set a school record that was broken by Deion Sanders in 1985 when he ran one back 100 yards.  Biletnikoff enjoyed a breakout season in his senior year, catching 57 passes for 975 yards and 11 touchdowns—impressive totals in the run-oriented era of college football.  He capped off the 1964 season by setting a Gator Bowl record with 13 catches for 192 yards and four touchdowns in a win over Oklahoma and became Florida State’s first consensus All-American.

In 1965, the Oakland Raiders selected Fred Biletnikoff with the 11th overall pick of the AFL Draft, six spots after Gale Sayers and two picks after Dick Butkus, both also consensus All-Americans.  The Detroit Lions selected him with the 39th pick of the NFL Draft, sandwiched between Allen Brown of Mississippi and Alabama’s Ray Ogden.  Biletnikoff signed with the Raiders and cracking into the lineup in the seventh game of his rookie year, catching seven balls for 118 yards in a 30-21 win over the Boston Patriots at Frank Youell Field in Oakland.  The following year, he injured his knee in the tenth game of the season and underwent reconstructive surgery.  Biletnikoff became a starter in 1967, the same year that the Raiders obtained Daryle Lamonica from Buffalo.  Both flourished in Oakland’s “vertical” passing offense, as the “Mad Bomber” threw for 30 touchdowns—five to Biletnikoff—who also caught 40 passes and averaged nearly 22 yards per grab.  The Raiders went an AFL-record 13-1 to earn a trip to Super Bowl II, where they were trounced by Green Bay in Vince Lombardi’s last game as coach of the Packers.  Ken “Snake” Stabler took over as Oakland’s quarterback in 1973, leading the Silver and Black to five straight postseason appearances and a victory in Super Bowl XI.  Biletnikoff was Stabler’s favorite target, hauling in double-digit pass receptions in three of those five post seasons.  Mr. Biletnikoff retired from the NFL in 1978, played the 1980 season with the Montreal Alouettes of the CFL [Daily Dose, November 25] and served as receivers coach for the Oakland Raiders from 1989-2006.

Fred Biletnikoff played in two Super Bowls and was MVP of the title game in 1977, a 32-14 victory over the Minnesota Vikings, after catching four passes for 79 yards to set up three Raider scores.  He was one of the most reliable, consistent receivers ever to play, possessing an uncanny ability to get open, catch the football and keep drives alive by making first downs.  Mr. Biletnikoff was the consummate “possession” receiver, catching 40 or more passes in a record ten straight seasons while playing in six Pro Bowls.  He was durable, missing only eight games in 14 seasons, and hauled in 76 touchdowns in 190 games.  Biletnikoff caught 589 passes in his career, second-most in franchise history and, at the time of his retirement in 1978, was fourth on the NFL’s all-time list.  He also holds postseason records for most catches [70], receiving yards [1,167] and touchdowns [10] in 19 playoff games.  Mr. Biletnikoff is a member of Pennsylvania high school football’s all-time first team—the field at Central Tech bears his name–the Florida Sports Hall of Fame and Florida State University’s hall of fame.  In 1988, he was inducted into the Pro Football Hall of Fame and, in 1991, entered the College Football Hall of Fame.  The Fred Biletnikoff Award, awarded annually to the best wide receiver in college football since 1994, was named in his honor.