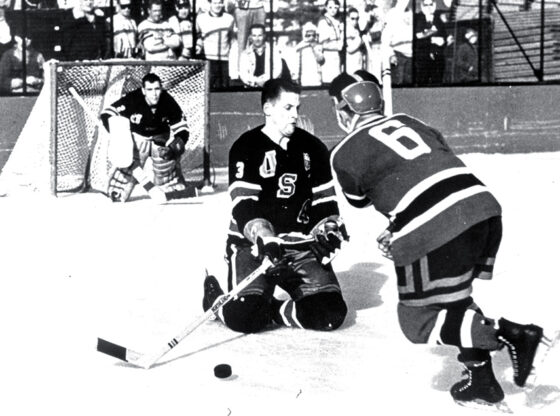 Two decades before the “Miracle On Ice” captured the gold medal for the Americans in Lake Placid, New York, there was another team making hockey history on the opposite coast.

Fifty-seven years ago today, down 4-3 headed into the third and final period of the gold medal contest against Czechoslovakia, the United States men’s hockey team exploded for six goals en route to a 9-4 victory in Squaw Valley, California.  It was the first-ever gold medal for the U.S. in hockey and has come to be known as the “Forgotten Miracle.”

Despite the fact that the Americans won the silver medal in the two previous Olympics [1952 and 1956], they were still considered overwhelming underdogs coming into the 1960 Winter Games.  Czechoslovakia was powerful.  The Soviets had won gold in 1956 and had not lost an international competition since.  Canada—which had won six of the previous eight Olympic hockey tournaments—was the best team in the world.  While today’s Olympic hockey teams are comprised of professionals,  the 1960 group was a collection of amateurs—scrappy college kids and men who had to take off from work to compete in the tournament.  Coached by Jack Riley, who played on the 1948 U.S. team before serving as head coach at West Point, the Americans returned five players from the 1956 team that won the silver medal.  The legendary John Mariucci, who coached Team USA in 1956 and was head coach at the University of Minnesota, assisted Riley and held tryouts on the Gophers home ice at Williams Arena.

Most of the players on the 1960 squad were from Minnesota and Boston.  John Mayasich [Daily Dose, 1/25/16], who led the U.S. team in scoring at the 1956 Olympics and is still the greatest player in Minnesota high school hockey history, was playing for his record eighth U.S. national team.  During the week, the 26-year-old Mayasich was an advertising executive for a television station.  On weekends, he played for the Green Bay Bobcats of the U.S. Hockey League.  Mayasich did not meet the team until the day before the Games began in Squaw Valley.  Jack McCartan, who had been an All-American third baseman at Minnesota, was on loan from the U.S. Army to play goal.  The team featured two sets of brothers–all of them wingers.  Warroad, Minnesota’s, Roger and Billy Christian were experienced international players who knew how to create offensive chances.  The Christians are part of the first family of American hockey: Bill’s son, David, was a member of the 1980 team that won gold in Lake Placid.  Much to the chagrin of the team—who had played an 18-game pre-Olympic tour leading up to the tournament and had been together for months—Coach Riley cut Herb Brooks [Daily Dose, 3/4/16] days before the tournament to make room for Bill and Bob Cleary.  The Clearys, who had starred at Harvard, had recently opened an insurance business and could not afford to take two months off—but they could leave for two weeks, time enough to play in the tournament.

The addition of the Clearys divided the team,  and many considered not competing. “It was pretty controversial,” said Roger Christian.  “Everyone agreed not to talk to them.”  McCartan, who had won a bronze medal with the U.S. baseball team at the 1959 Pan Am Games, told his teammates, “We’ve worked too hard to let this get in the way.”  Team captain Jack Kirrane, who had taken a leave of absence as a firefighter to join the team, said he planned to play, “Even if I’m the only guy on the ice.”

Having been received coldly upon joining the team, Bill Cleary addressed his teammates prior to the first game.  “I didn’t come 3,000 miles to lose.  We don’t have to hug and kiss.  I just want you to pass me the puck.”  Led by Mayasich, who scored five goals in wins over Czechoslovakia and Australia, the U.S. advanced to the medal rounds.  The Americans beat favored Sweden, 6-3, behind Roger Christian’s hat trick and his brother Billy’s three assists, then went on to beat Germany, 9-1, setting the stage for a showdown with mighty Canada.  “No one gave us a chance,” said Bill Cleary. “Beating the Canadians in hockey would be like Canada beating us in baseball.”  Behind McCartan’s 39 saves, the U.S. beat Canada, 2-1.  “It was shocking to us,” recalled Harry Sinden, who played for Team Canada and later coached them in the 1972 Summit Series [Daily Dose, 9/28/15].  “We were probably favored by seven goals.”  The victory pitted the Americans against the mighty Russians—whom they had never beaten–in the next round.

On February 27, in front of 10,000 spectators at Squaw Valley’s open-air Blythe Arena, the U.S. squared off against the Soviet Union.  Down 2-1 in the second period, Billy Christian—the team’s smallest player at 5-foot-9, 145 pounds– took over the game.  He scored a tying goal late in the second period, then teamed up with brother Roger and Tommy Williams—who, at 19, was the youngest member of the American team—to beat Nikolai Puchkov on a breakaway with 5:01 left in the third period.  The U.S. held on to advance to the gold medal game against Czechoslovakia the following day.

Thinking the Soviets would be playing Canada for gold, Olympic schedulers gave them the prime-time ice slot of the final day’s play.  The Americans and Czechs played the first game of the day, with an 8 am puck drop.  Still groggy from the previous day’s game, the U.S. came out sluggish and the teams were tied at 3-3 after one period.  The U.S. then fell behind, 4-3, after two stanzas.  With the gold medal on the line, the Americans roared back to play one of the greatest third periods in Olympic hockey history.  Roger Christian scored at 5:50, followed by Bill Cleary.  From there it was all red, white and blue, as Christian added two more goals in the final period to give the U.S. a stunning 9-4 win and the country’s first Olympic gold medal.

The underdog Americans upset some of the biggest hockey powers in the world.  Bill Cleary led the U.S. team with 12 points in the tournament.  His brother, Bob, had eight.  “U.S.A. won it.  It wasn’t me, and it wasn’t other individuals,” said Bob Cleary.  “It was a team effort for your country.”  The Christian brothers scored nine points each and McCartan was brilliant in goal, going unbeaten while giving up only 17 goals in seven games.  At 29, Jack Kirrane was the oldest player on the team, a departure from the 1948 squad when, at 17, he’d been the youngest. “Jack is one of the toughest guys you will ever meet,” said Bob Cleary.  “But when he went up to the podium to get the gold medal, his knees were shaking and his hands were a pool of water.  It is something I will never forget.”

Bill Cleary [who still holds Harvard’s single-season goals and points record] and Mayasich are members of USA Hockey’s All-Time Team.  Herb Brooks would go on to coach the 1980 U.S. team to a gold medal at the “Miracle on Ice.”  Tommy Williams went on to play a dozen years in the NHL and, at one point, was the only American in the league.

On this date in 1960, the United States beat Czechoslovakia, 9-4, to earn the first ice hockey gold medal in U.S. Olympic history.  The Forgotten Miracle is the remarkable story of the first and only U.S. hockey team to finish with a perfect record in the Olympics.