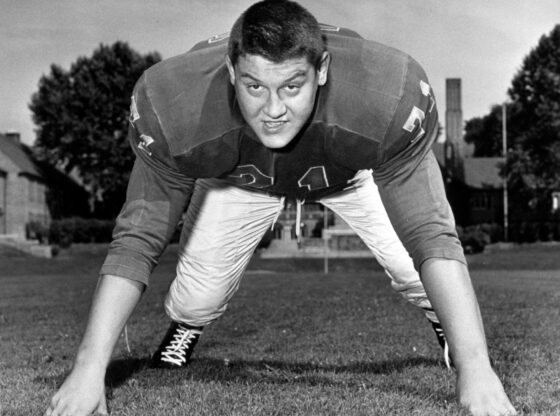 Football is a game of violent collisions.  Today we set aside the savagery and brutality to focus on the funny.  Here are a dozen quips we really like.

“I never graduated college, but I was only there for two terms – Truman’s and Eisenhower’s” – former University of Iowa All-American Alex Karras.

“I wouldn’t ever set out to hurt anybody deliberately unless it was important – like a league game.” – Dick Butkus.

Former Houston Oilers head coach Bum Phillips on running back Earl Campbell’s inability to finish a one-mile conditioning run during training camp.  “When it’s first and a mile, I won’t give it to him.”

“If he’s got golf clubs in his trunk or a camper in his driveway, I won’t hire him.” – Lou Holtz, on finding good assistant coaches.

Asked if Lynn Cain of the Atlanta Falcons was ready to play against his Buccaneers, Tampa Bay head coach John McKay said, “Let me know if Cain is able.”

“I’ve been big since I was little.”  — former Chicago Bears defensive tackle William “The Refrigerator” Perry.

I don’t know if he’s in a class by himself, but I do know that when that class gets together, it sure don’t take long to call roll.” – Bum Phillips, on hall-of-fame running back Earl Campbell.

Warpaint was the pinto horse and mascot that circled the field after every Kansas City Chiefs score.  Following a 42-10 loss to the Chiefs in Kansas City in 1975, Oakland Raiders coach John Madden quipped, “We couldn’t beat the Chiefs, but we damn near killed their horse.”

“Football is, after all, a wonderful way to get rid of your aggressions without going to jail for it.”  — former Ohio State coach Woody Hayes.

“My knees look like they lost a knife fight with a midget.” – E.J. Holub, who underwent a dozen knee surgeries during his ten-year career.

When asked what he thought of his team’s execution, former Tampa Bay Buccanners coach John McKay wisecracked, “I’m all for it.”