15 of the Best Football Nicknames 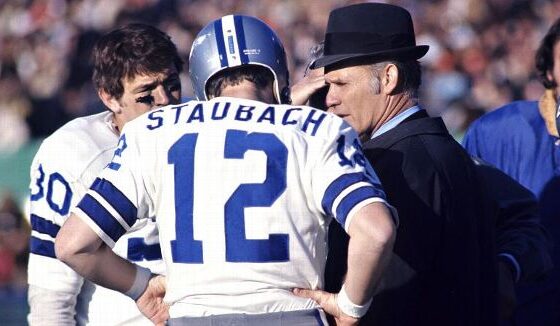 In October 2018, we brought you several of the greatest nicknames in football history.

Today, we deliver an additional 15 of the sickest sobriquets ever to grace the gridiron.

Captain Comeback.  The first player ever to win both the Heisman Trophy and Super Bowl MVP, Roger Staubach led the Dallas Cowboys to 17 game-winning drives in the final two minutes or in overtime.

Thomas Henderson’s story is straight out of Tinseltown.  A walk-on at NAIA Langston University, he was selected in the first round of the 1975 NFL Draft.  A 1978 Pro Bowler, Henderson dubbed himself Hollywood before cocaine addiction ended his career three seasons later.

Born on this date in 1940, Wendell Hayes played ten seasons as a member of the Denver Broncos and Kansas City Chiefs.  The King was a punishing fullback who helped the Chiefs upend the Minnesota Vikings in Super Bowl IV.

After moving from halfback to wide receiver four years into his pro career, Elroy Hirsch became one of the greatest deep threats in NFL history.  In 1951, Crazylegs led the league in receiving yards and catches, averaging nearly 23 yards per grab.  A member of the NFL 1950s All-Decade Team, Hirsch landed in both the college and pro football halls of fame.

A stalwart defensive tackle, Gene Lipscomb helped the Baltimore Colts to NFL titles in both 1958 and ’59.  A three-time Pro Bowler, Lipscomb stood 6’9” and weighed 290, earning him the nickname Big Daddy.  A larger-than-life character, Lipscomb enjoyed a side career in pro wrestling before a heroin overdose took his life at 31.

Dubbed The Tyler Rose, Earl Campbell is one of the greatest power backs ever to tote the rock.  After winning the 1977 Heisman Trophy at Texas, he was named NFL Rookie of the Year and MVP in his first pro season.  The best player in Houston Oilers history rushed for 74 touchdowns in a career that was all-too-brief.

As a rugged defensive end for the Denver Broncos, Rich Jackson earned trips to three straight Pro Bowls from 1968 to 1970.  Tombstone was ahead of his time.  Huge, fast and intimidating, Jackson struck fear in the hearts of quarterbacks throughout the league and is the best defensive lineman in Broncos history.

Strong-armed quarterback Daryle Lamonica threw the ball downfield in virtually any situation, earning him the nickname The Mad Bomber.  One of the AFL’s original gunslingers, Lamonica was a two-time league MVP, three-time All-Star and twice led the AFL in passing touchdowns.

When Craig Heyward was 12, another boy broke a cue stick over the future NFL running back’s head.  Heyward barely flinched, prompting his grandmother to dub him Iron Head.  Heyward played 11 pro seasons, most notably with the New Orleans Saints,  and earned a trip to the Pro Bowl in 1995.

Speedy wideout Dennis McKinnon joined the Chicago Bears in 1983 as an undrafted free agent.  He immediately impressed, earning him the moniker Silky D.  When David Edwards was born 14 years later, the nickname became his.  Currently a member of the Los Angeles Rams, the high school quarterback-turned-offensive lineman hopes to help spin the Rams football fortunes by earning them their first Lombardi Trophy in franchise history.

One of the first gigantic defensive lineman in pro football, 6’9”, 315-pound Ernie Ladd was appropriately nicknamed The Big Cat.  Ladd starred in basketball at Grambling State University before becoming a four-time AFL All-Star with the San Diego Chargers.  He wrestling professionally during the offseason, turning to it full time when a knee injury ended his football career in 1969.

As a Pennsylvania high-schooler, Billy Johnson dyed his football shoes on a dare.  He became known as White Shoes, and played 14 NFL seasons as a wide receiver and kick returner.  Johnson retired in 1988 as the league’s all-time punt returner.

From 1976 to 1980, Chuck Muncie and Tony Galbreath formed the Thunder and Lightning backfield of the New Orleans Saints.  The duo combined to amass 6,258 rushing yards and 55 touchdowns.  Muncie is the seventh-leading rusher in Saints history, while Galbreath is ninth.

Two-time Defensive Player of the Year Reggie White was voted First Team All-Pro in ten of his 15 NFL seasons.  White annihilated opponents, earning him a spot on the NFL 75th Anniversary Team as well as the 1980s and 1990s All-Decade teams.  An ordained Evangelical minister, White was aptly dubbed the Minister of Defense.

History of the NBA
12 One-Hit Wonders of Golf