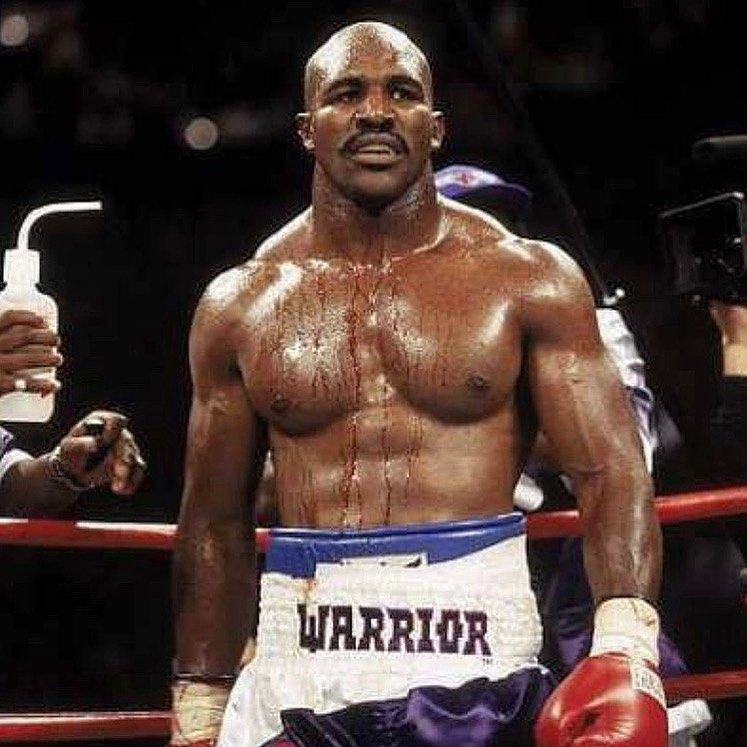 Evander Holyfield is the only four-time World Heavyweight Champion to ever lace up a pair of gloves.

Born in the mill town of Atmore, Alabama on this date in 1962, Evander was the youngest of nine children. He never knew his father and moved with his mother and siblings to Atlanta at age four. Holyfield discovered the Warren Memorial Boys Club near his home and spent much of his time there. He played football and won the Club’s offensive and defensive MVP awards despite being undersized. Holyfield started boxing at the age of eight, learning the “Sweet Science” from Carter Morgan, his first coach and long-time mentor. He qualified for the Junior Olympics at 13 and, two years later, won the Best Boxer Award at the Southwest Regional Championship. In 1983, Holyfield was the top-ranked amateur in the United States and competed in the Pan Am Games, earning a silver medal after losing to Cuba’s Pablo Romero in the light heavyweight final. One year later, he knocked out all five opponents he faced to win the national Gold Gloves title in St. Louis. Later that summer, he beat Ricky Womack in a two match box-off in the Olympic Trials to earn the light heavyweight spot on the U.S. team that would be competing in the Summer Games in Los Angeles. Holyfield knocked out each of his first three opponents in the 1984 Olympic tournament and appeared to be a lock for the gold medal as well as the Val Barker Cup as outstanding boxer of the Games. He faced New Zealand’s Kevin Barry in the semi-finals and knocked him out in the second round, but was disqualified by the referee for late hit. The crowd thought the call was so bad that a near riot ensued. The U.S team filed a formal protest and officials did not overturn the referee’s decision but did defy Olympic rules by allowing Holyfield to retain the bronze medal he had earned for reaching the semi-finals. Holyfield handled the matter with grace and dignity, endearing himself to boxing fans throughout the world. Holyfield’s amateur record was 160-14 with 76 knockouts and, following the Olympics, he decided to turn pro.

“The Real Deal” made his professional boxing debut on November 15, 1984, winning a unanimous decision over Lionel Byarm in a televised fight at Madison Square Garden. Holyfield had graduated high school standing 5’8” tall and weighing just 147 pounds but had grown to 6’0” and 178 pounds by the time of his debut at age 21. Holyfield was 4-0 before moving up to cruiserweight in 1985 and won his first seven bouts to earn a title shot against Dwight Muhammad Qawi on December 7, 1986. Holyfield won a narrow 15 round split decision at the Omni in Atlanta in what The Ring magazine called “the best cruiserweight bout of the 1980’s” to become WBA Cruiserweight Champion. Six months later, he beat Ricky Parkey in three rounds to claim the IBF Cruiserweight title and added the WBC belt with a TKO of Carlos De Leon sixteen months later. After the De Leon fight, Holyfield announced he was moving up to the heavyweight division, where he knocked out James “Quick” Tillis in his first match in the sport’s premiere division. He won his next five fights to set up a title shot against James “Buster” Douglas, who had pulled off the biggest upset in heavyweight boxing history in February of 1990 when he knocked out Mike Tyson to claim the belt. Holyfield was Douglas’ first title defense and they met on October 25, 1990. “Buster” fought Tyson weighing 231 pounds but came into the Holyfield fight– just eight months later–at 246. “The Warrior” entered the fight at a lean 208 pounds and knocked Douglas out in three rounds to earn the WBC, IBF, WBA and The Ring Heavyweight titles. He successfully defended the belts three times before losing the first bout of his career to Riddick Bowe on November 13, 1992. One year later, the two fought in a rematch and Holyfield reclaimed the titles, only to lose to Michael Moorer in April of 1994. Following the fight, Holyfield was diagnosed with a heart condition, and announced his retirement from boxing.

Holyfield received medical clearance from the boxing commission and returned to the ring in 1995—winning his first fight but losing his second. Tyson had reclaimed the WBC and WBA titles and agreed to face 34-year-old Evander Holyfield on November 9, 1996. The challenger became the three-time Heavyweight Champion of the world with an 11th round TKO in a match The Ring called “Fight of the Year” and “Upset of the Year.” Holyfield successfully defended his title in a rematch seven months later after Tyson was disqualified for biting off part of the champion’s ear. In March of 1999, Holyfield and Britain’s Lennox Lewis battled to a controversial draw and were ordered to an immediate rematch by the WBA, WBC and IBF. They met eight months later, with Lewis taking the titles in a unanimous 12-round decision, but the Englishman was stripped of the WBA belt for failing to face lightly-regarded challenger John Ruiz. With the title vacated, Holyfield and Ruiz met in Las Vegas on August 12, 2000, where “The Real Deal” won a 12-round decision to become the only four-time World Heavyweight Champion in history. Ruiz won a re-match seven months later and Holyfield continued fighting for the next decade, losing five of his last twelve bouts.

Evander Holyfield fought professionally for nearly 27 years and retired with a career record of 44-10-3, with 29 knockouts. He was voted Fighter of the Year by The Ring magazine in 1987, 1996 and 1997 and by BWAA. Boxingscene.com selected him as the Greatest Cruiserweight of All-Time in 2009.