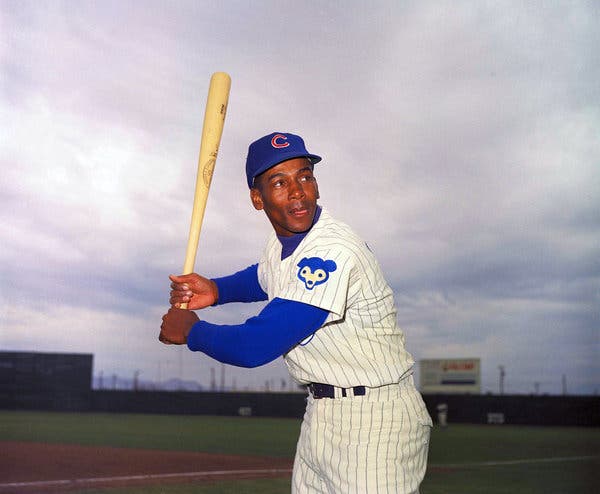 Perhaps no player in baseball history has been identified with one team as strongly as Ernie Banks, who spent all 19 years of his big league career with the Chicago Cubs.

The greatest power-hitting shortstop of the 20th century, Banks was an institution in Chicago and the most popular Cub ever to wear the blue pinstripes.  The first black player in franchise history was also the best.  Banks is the all-time Cubs leader in games played [2,528], at-bats [9,421], home runs [512], total bases [4,706], and extra-base hits [1,009].  Despite playing for losing teams [Chicago finished above .500 in only five of Banks’ 19 seasons], he is the first player in National League history to win back-to-back MVP Awards [1958 and 1959].  Before Alex Rodriguez, whose numbers are tarnished by the use of performance-enhancing drugs, Banks had the five highest single-season home run totals for a shortstop, including a record 47 in 1958. “Mr. Cub” led all shortstops in home runs and RBI in the 1950s, and his 277 homers as a shortstop remains a National League record.

Banks is the first player in Cubs history to have his number retired, when Chicago set aside Number 14 in 1982.  Today, a flag bearing Ernie’s number flies over Wrigley’s left-field bleachers on game days.  Playing for Chicago’s “Loveable Losers” for nearly two decades, Banks never appeared in a postseason game.  He played 1,125 games at shortstop and 1,259 at first base, and his 2,528 games played are the most by anyone who never participated in postseason play.  Baseball’s eternal optimist, Banks was famously credited for saying, “It’s a beautiful day.  Let’s play two.”  And play he did.  Banks was a workhorse, playing in 1,068 of a possible 1,086 games in a seven-year stretch between 1956 and 1961. Playing one of the game’s most demanding positions, he led the league in games played in six of those seasons.

Ernest Banks was born in Dallas January 31, 1931, the second of Eddie and Essie’s 12 children.  Eddie Banks had played for a black semi-pro team in Texas, yet young Ernie had no interest in baseball.  He attended Booker T. Washington High School – Dallas’ first high school for African-American students and alma mater of singer Norah Jones.  Washington had no baseball team, so Banks played softball.  He also lettered in football, basketball and track.  At 17, he was invited to join a semi-pro team in Amarillo, where he caught the eye of the legendary Cool Papa Bell.  Bell recommended him to the Kansas City Monarchs of the Negro American League, where Jackie Robinson and Satchel Paige had played five years earlier.  In 1950, the Monarchs signed the skinny 19-year-old to his first pro contract.

Banks played the 1950 season for the Monarchs, spent two years in the Army, then returned to Kansas City.  In September 1953, he was sold to the Chicago Cubs for $ 10,000.  Six years after Jackie Robinson broke major league baseball’s color barrier, Ernie Banks became the Chicago Cubs’ first African-American.  Playing in the final ten games of the 1953 season, Banks hit two home runs, drove in six, and batted .314.  The following year, he became the starting shortstop, finishing second to Wally Moon in MVP voting [and ahead of Henry Aaron].  Banks made the first of 11 career All-Star teams in 1955, displaying power never before seen from a shortstop.

Mr. Cub hit more than 40 homers in a season five times.  Playing in the era of Willie Mays and Hank Aaron, he led the National League in home runs twice, RBI twice, and finished with 512 career round-trippers.  In 1955, he belted 44 home runs.  Five were grand slams – a single-season record that stood for 20 years.  In the four seasons between 1957 and 1961, the 180-pound Banks averaged 44 home runs a year and, in 1959, drove in 143.  A skilled defender, Banks set single-season records for fewest errors [12] and best fielding percentage [.985] in 1959.  He won a Gold Glove the following year, his last full season at shortstop.  A knee injury suffered while in the Army ended Banks’ consecutive games played streak at 717.  He moved to outfield, played a few games at third base, then spent his last 11 seasons at first base, where his fielding percentage averaged .994.

Known for his engaging personality and love of the game, Ernest Banks collected 2,583 hits, drove in 1,636 runs and scored more than 1,300 runs in his brilliant career.  Playing for teams that never had a chance to win a pennant, Banks remained cheerful and optimistic.  “From the minute he woke up to the minute he went to bed, he had a positive attitude and was a joy to be around,” said long-time teammate Billy Williams.  Banks is one of eight professional baseball players to be awarded the Presidential Medal of Freedom, the highest civilian honor in the U.S.  He was inducted into the Baseball Hall of Fame in 1977, his first year of eligibility.  In 1999, Banks joined Honus Wagner and Cal Ripken Jr. as the three shortstops named to Major League Baseball’s All-Century Team.  Nine years later, a statue of Mr. Cub – inscribed with “Let’s Play Two” was unveiled outside Wrigley Field.

The greatest and most important player in Chicago Cubs history died in the Windy City January 23, 2015, eight days before his 84th birthday.

On this date in 1970, Ernie Banks became the ninth player in major league history to hit 500 home runs.  In the second inning of a game against the Atlanta Braves at Wrigley Field, Banks hit a fastball off Pat Jarvis into the left field bleachers that simultaneously gave him 1,600 career RBI.  The home crowd gave Mr. Cub a four-minute standing ovation.  Banks went 1-for-3 on the day as the Cubs won, 4-3, in 11 innings.  Frank Secory was part of the umpiring crew that day.  Mr. Secory was also on the field for Ernie Banks first big league homer in 1953.