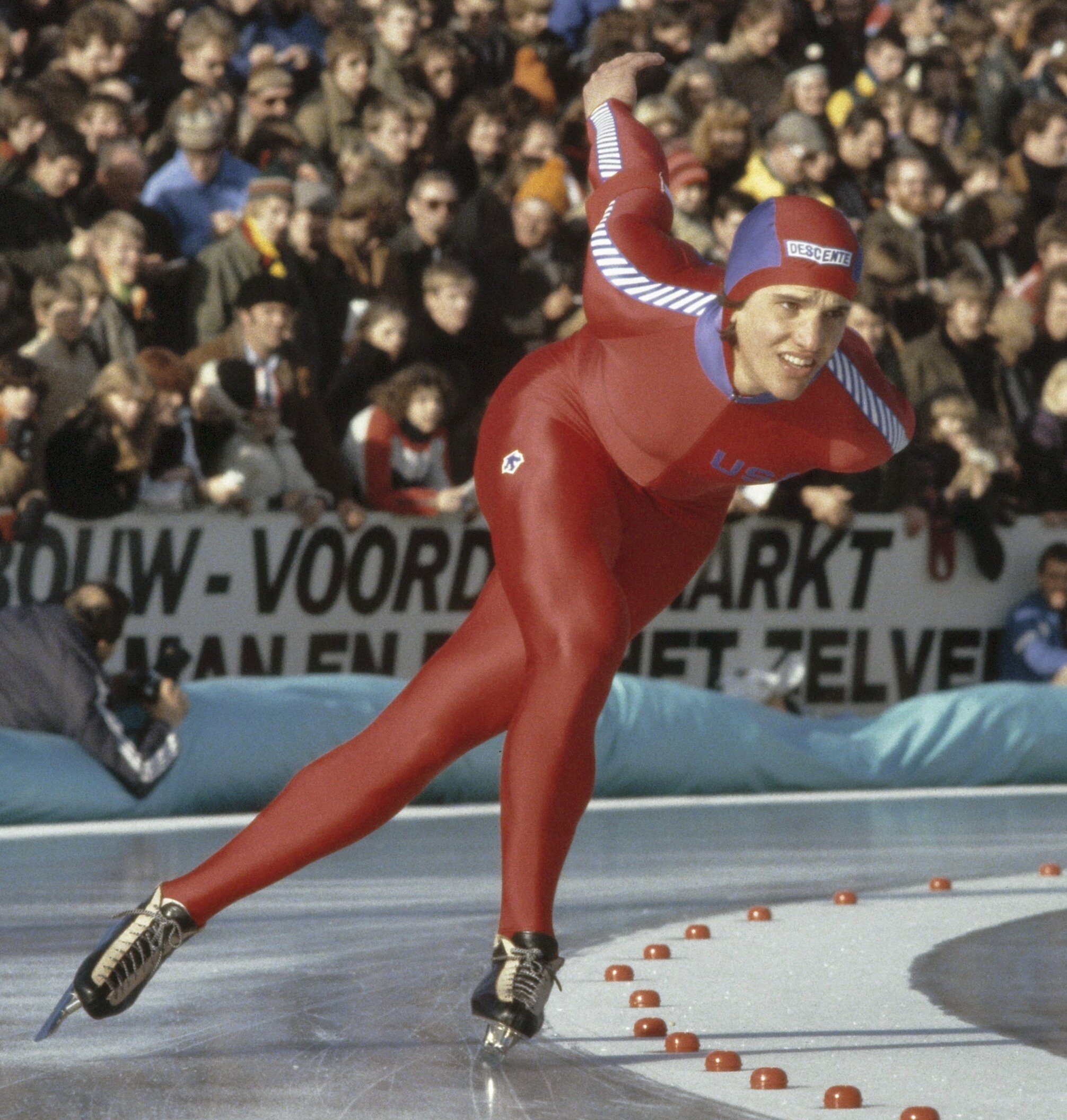 Eric Arthur Heiden is the only athlete to win five individual gold medals in a single Olympic Games. Born into an athletic family in Madison, Wisconsin, on June 14, 1958, he started skating at five.  Three years later, he started playing hockey—his favorite sport—and joined the Madison Speed Skating Club team.  At 14, Heiden gave up hockey and started training seriously for speed skating, working out five hours a day on ice and dry land.  He made the national speed skating team at 16, spending three months competing in Europe, before qualifying for the 1976 U.S. Olympic team.  At 17, Heiden competed in two events in the Winter Games in Innsbruck, Austria, taking seventh place in the 1,500 meters and finishing 19th in the 5,000 meter race.  His younger sister Beth also made the Olympic team, finishing 11th at 3,000 meters.  The following year, he won the Junior World Allround—an event comprised of 500, 1,500, 5,000 and 10,000 meter races—and became the first American to win the World Senior Allround.  In between, he took the World Senior Sprints championships—a two-day event featuring one 500 and one 1,000 meter race each day—and earned the first of four Oscar Mathieson Awards, given annually for the outstanding speed skating performance of the season.  Heiden defended all three titles in 1978.  Too old for Juniors in 1979, he won the Sprints and Allround for the third straight year and became the first man since 1912 to win the “big combination”—four races of 500-1,500-5,000-10,000 meters at the World Championships—while also receiving his third consecutive Oscar Mathieson Award.  Heiden, an undergraduate at the University of Wisconsin, was a relative unknown outside of Madison, but was a household name in Norway and Netherlands—countries that worshipped speed skating. In February 1980, Eric Heiden put on what many consider the greatest individual performance in Olympic history at the Winter Games in Lake Placid.  On February 15, he beat Yevgeny Kulikov, the 1976 gold medalist from the Soviet Union, while taking gold and setting a new Olympic record in the 500 meters.  The next day, he won his second gold, beating world-record holder Kai Arne Stenshjemmet in the 5,000.  Three days later, Heiden won the 1,000 meters by one-and-a-half seconds before capturing his fourth gold medal in the 1,500 meters on February 21.  Heiden was 6’-1”, weighed 185 and had a 32 –inch waist with 27-inch thighs.  Sports columnist Tom Boswell wrote, “Many athletes  have muscles.  Few have Heiden’s strength of mind, his mulish will inside a thoroughbred’s physique.”  After attending the U.S. v. Soviet Union hockey game—the “Miracle on Ice”—the night before his final event, Heiden rushed to the rink on February 23 for the 10,000 meter final, where he won his fifth gold medal while breaking the world record by more than six seconds.  No Olympian, in any sport, had ever competed in five individual events and come away with five gold medals.  Furthermore, no athlete in history had ever dominated their sport over such varied distances—from the 500 meter sprint to the grueling 10K—and done so outdoors.  Heiden became an Olympic hero and instant celebrity, but shied from the spotlight and retired in 1980.  “Maybe if things had stayed the way they were, and I could still be obscure in an obscure sport, I might want to keep skating.  I really liked it best when I was a nobody.”  Mr. Heiden won more gold medals at Lake Placid than Finland, Norway, Italy, Canada, Hungary, Japan, West Germany and Switzerland combined. Eric Heiden is not only the greatest speed skater of all time, he is one of the greatest athletes in history.  Between 1976 and 1980, he skated 15 world records.  He won five Olympic gold medals, four World Sprints Championships, and three World Allround titles.  Mr. Heiden stood at the top of the Adelskalender, the ranking system for long-track speed skating, for a record 1,495 days and is the only skater to win the Mathieson Award—the Oscar of speed skating—four times.  Heiden received the Sullivan Award as top amateur athlete in the United States in 1980 and, upon retiring from skating that year, took up cycling.  After failing to make the 1980 U.S. Olympic cycling team, Eric Heiden persevered, winning the 1985 U.S. Professional Cycling Championship and earning a spot in the 1986 Tour de France, the sports’ most prestigious event.  In 1994, Dr. Heiden earned his M.D. from Stanford University, before serving as team physician for the Sacramento Kings.  He currently resides in Park City, Utah, where he practices sports medicine. On this date in 1980, Eric Heiden beat Yevgeny Kulikov—who had set four of the last five world records—in the 500 meters, the opening event of the speed skating competition at the James B. Sheffield Olympic Skating Rink in Lake Placid, New York.  Heiden established a new Olympic record of 38.03 while capturing the first of the five gold medals he would win in the 1980 Winter Games.