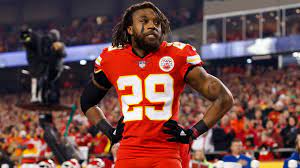 A fear of horses cannot hold back Eric Berry.

The emotional leader of the Kansas City Chiefs’ defense, Berry has played in five Pro Bowls.  A versatile, intelligent defender, he is one of the finest safeties in the NFL and has been named All-Pro three times.

In eight pro seasons, Berry has made 369 tackles, with 65 assists and 14 interceptions.

A man of impeccable character and astounding resiliency, Berry has overcome great adversity.

After suffering a torn ACL in the first game of the 2011 season, Berry returned to become one of the top defensive backs in the NFL.

In December 2014, he was diagnosed with Hodgkin’s lymphoma [blood cell tumors].  Berry underwent chemotherapy in the offseason and was declared cancer free.

Late in the fourth quarter of a season-opening win against the Patriots in Foxboro this past September, Berry was carted off the field after rupturing his left Achilles tendon.

Covering Rob Gronkowski on a non-contact play, Berry’s foot appeared to get caught in the turf.  The talented defender is expected to make a complete recovery and return for the 2018 campaign.

Born in Atlanta on this date in 1988, James Eric Berry comes from a family of football players, all of them Volunteers.  His father, James, played running back at Tennessee and captained the 1981 squad.  His younger brothers, twins Elliott and Evan, are rugged defenders who just finished their senior seasons in Knoxville.

Berry attended Creekside High School, in the Atlanta suburb of Fairburn.  At the 2006 Class 4A Georgia state track championships, he anchored the title-winning 4 x 400 relay team and set records in the long jump and 200 meter dash.

A two-way football player [quarterback and cornerback], Berry led Creekside to a 35-7 record as a starter.  The Seminoles were one of the best teams in the Atlanta area as Berry, along with two of his teammates, later landed with the Kansas City Chiefs.

Considered the top defensive back in America, Berry was named 2006 Georgia High School Player of the Year and was rated the third-best football prospect in the nation.  After being named a U.S. Army All-American, he accepted a scholarship to the University of Tennessee.

In three seasons at Tennessee, Berry made 245 tackles with 14 interceptions.  After starting every game in his first season, he was named SEC Defensive Freshman of the Year and earned first team Freshman All-American honors.

As a sophomore, Berry was named team captain.  He led the nation in interceptions – returning two for touchdowns – and was named SEC Defensive Player of the Year, first team All-American, and received the 2008 Jack Tatum Award as the best defensive back in college football.

The Vols also used the versatile Berry at quarterback and running back, where, as a sophomore, he averaged five yards from scrimmage each time he touched the ball.

After forgoing his last year of eligibility, Berry entered the 2010 NFL Draft, were he was selected fifth overall – four spots behind Sam Bradford – by the Kansas City Chiefs.

The Chiefs signed the hard-hitting Berry to a six-year, $ 60 million dollar rookie deal, making him the highest-paid safety in NFL history.

He responded by starting all 16 games while never missing a defensive snap, and was selected to his first Pro Bowl.

Late in 2014, Berry began to complain of chest pain.  A mass was discovered in his chest, and he was diagnosed with Hodgkin’s lymphoma.  Following successful treatment, he returned to football nine months after his initial diagnosis.

Since becoming cancer-free, Berry has played in 33 NFL games while recording 145 tackles with six interceptions, two of which he returned for touchdowns.

Despite suffering from equinophobia – a fear of horses – Berry remains one of the NFL’s top defenders.  His condition is not made any easier with the Chiefs’ mascot, Warpaint, galloping the sidelines at Arrowhead Stadium in Kansas City.

A cousin of 1980 College Player of the Year and former All-Pro Hugh Green, Eric Berry was named to the 2000s All-Decade High School football team by several publications, including ESPN, Sports Illustrated, and RivalsHigh.com.

The heart and soul of the Kansas City defense, Mr. Berry signed a six-year, $ 78 million contract with the Chiefs in February 2017.